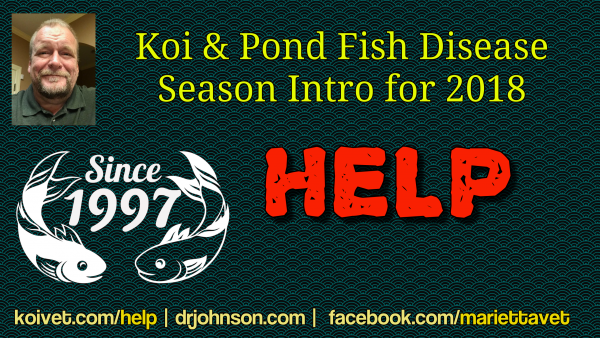 White-eye is often a Flexobacterial infection. Injections are curative. In other cases, a fish will have traumatized the eye in some way and the lesion is corneal edema. In these cases, injections of antibiotics will be harmless, but only time resolves this lesion, Finally, White-eye may be the result of caustic trauma. It’s not rare to see a group of fish that were overdosed with Formalin or burned by Ammonia to develop white-eye. Again, some Stress coat, salt and an injection never hurt these fish.

Another important consideration is that changes in water quality can cause flashing. A large freshwater change can cause flashing as the fishes’ skin adapts to a slightly higher or lower pH. Residual chlorine or other metals in new water can cause flashing. Using a dechlorinator alleviates a lot of this. Fish brought to shows can flash like crazy. The new water in a show tank can really irritate the fish, causing flashing. Still, you have to keep in mind that a parasite could potentially be causing the flashing and caution and quarantine would be a great idea.

Finally, black plastic water lines which contain large amounts of UV stabilizers and elasticizers can set up an irritation sufficient to cause excessive flashing. Never use a novel plastic with your fish. Always use things which you know won’t hurt fish.

Many of the fish which “waste away” are often burdened by flukes. In the absence of any other stressor, like bad water, fish can carry flukes handsomely without explosive losses, but they slowly lose body condition as they bleed to death through their gills. Especially commonly seen among smaller fishes of the one-year class, larger fish that waste away may have some other internal pathology. Wasting can also be caused by tuberculosis of the liver, other liver pathology, or crappy corn-based diets. Better diet is indicated here. 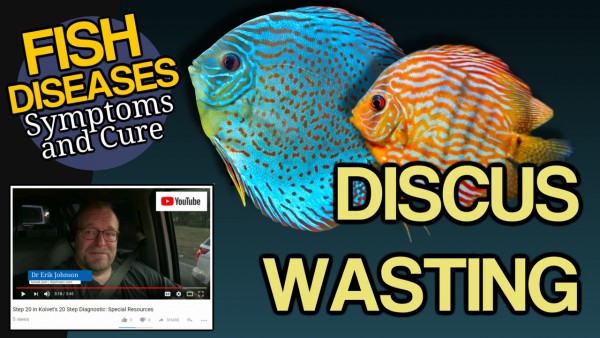 Jumping behavior suggests the fish have a problem with parasites, or their water. You’ll see fish jumping when the pH is dropping, or when some other irritant is accumulating in the water, like Ammonia. So, the first things you do are water tests. Then, if nothing is found, please consider that parasitisms, particularly with Flukes can cause jumping. We assume that the hope is that jumping will dislodge the parasites. Instead, it often leads to a fatal “flop-fest” on the ground. So, establish water quality first and then treat for parasites. I’d recommend salt as a good first choice, or maybe the potassium regimen listed in the book.

Split fins can often indicate Flukes. It’s true. When I see a collection in which the tails are notched, and the pectorals are split, I consider it imperative to get a scope study done on the fish. You’ll often find flukes. To repair a split pectoral fin, you anesthetize the fish and suture the fin back together with a fine 3-0 or finer suture, by weaving the suture through the rays of the fin and eventually closing the gap. The suture breaks down in a week under water and the fin is as good as new.

Some little black spots are often called Shimi. This is an unfortunate genetic defect in some fish wherein a Kohaku gets some little black dots and they’re suddenly a worthless Sanke. There is also a growing body of evidence that suggests the condition may be common in water with high turnover or exposure to caustic irritants like Chlorine. Case in point: Shimi is rarely noted in natural greenwater ponds but is common in crowded manipulated reuse systems.

Another type of blackening is a generalized type wherein the fins and body may develop a blackening change from chronic or caustic trauma. Case in Point: Fish are badly ammonia burned by a filtration failure or inadequacy —> A week later, after water quality is restored, the fish develop blackened areas, called a Melanophore Migration. Severe parasitisms can later cause blackening as the skin starts to heal. The blackening is not permanent, but may remain for two to four weeks before subsiding.

Hydrogen Sulfide (discussed here), Eldrin, organophosphate poisoning, copper poisoning. The cause of rolling, torpedo, fearlessness is usually a poison that causes a neurological disorder like rolling and spiral swimming. You’d do well to do a massive (50+ %) water change with a chloramine-and-heavy-metal binding neutralizer like Prime® or Detox.

Almost always a fluke infestation. Some rare exceptions would be bacterial gill disease, and the two conditions are often super-imposed. Bacterial gill disease is recognizable grossly in moribund specimens because the gills are basically red looking with patches of rotten tissue. Sometimes, more subtly, there will be streaks through the gill tissue, *NOT* around the arch. If you see signs referable to Bacterial Gill Disease you owe it to yourself to inject all other exposed fish or treat with  nothing but Chloramine-T for two hours or so.

Flared gills in a DEAD fish often speaks to a nitrite poisoning. A quick check of water quality, even with a dip-type test strip, will reveal this kind of loss. If fish are dying from nitrites, simply salt the tank to a mere 0.1% and Bioseed as soon as possible.

Fish Head Down, Tail at surface

This is often a symptom of a bacterial infection – but has been seen in any pathology of the gills, including Koi Herpes Virus. Check your water, observe all points at FIRSTAID and make SURE you get some injections on board as soon as possible. You will lose the head-down fish within a week to ten days and then other will die if you do not intercept the parasites which may have precipitated this, and intercept the bacterial invasion going on inside. INJECT, Inject, Inject!

If the fish are hovering lethargically with heads at the surface, not gasping, just hanging – – Check your pH at once. This can be a symptom of pH crash leading into acidosis. Very often, the pH is falling and the fish will hang under the water surface, then start getting a milky skin. It never hurts to follow up with an examination of gill tissue both grossly, and microscopically. Also, exhaust all possibilities as far as water testing, and you should give consideration to the helpful first aid pages at this site.

“Layover” or “Sleeping Sickness” is usually a bacterial infection in Koi that is brought about by parasites chewing on the gills or skin. In other instances, it is only a result of severe stress, such as bitter cold or chlorine exposure – The most commonly found parasites are Chilodonella, Costia and or Trichodina.

You have to evaluate for all potential sources of the stress, and correct them. I recommend salting to 0.3% and then if possible, injecting the fish to offset any infection which may be in the system. Several medications are also available. A favorite is BSDT

Three out of four times these fish will have an acorn, rock, stone, tiny pinecone or other foreign body in the mouth. If you’re gentle, you can push the stone forward and out of the mouth through an access way under the gill cover. The fish would do a little better under anesthesia. Oil of Cloves can be recommended. The other cases of “Open Mouth” are usually an ulcer or sore on the roof of the mouth. You carefully swab these with hydrogen peroxide, making sure no excess peroxide gets on the gills and inject the fish intraperitoneally with Baytril or any of the other medicines listed and demonstrated in the book.

That’s almost always an advancing fluke infestation; but you owe it to yourself, and that fish to do the following two things:

(1) Net the fish, and do an oral exam of mouth, roof of mouth looking for Ulcer, gills, looking for swelling, paleness, streaks of white around the edge of the gill or through the gill tissue, or any kind of foreign body like a piece of pine straw intertwined in the arches or a stone in the mouth.

(2) Gill scrape with a cover slip and examine microscopically for Flukes.