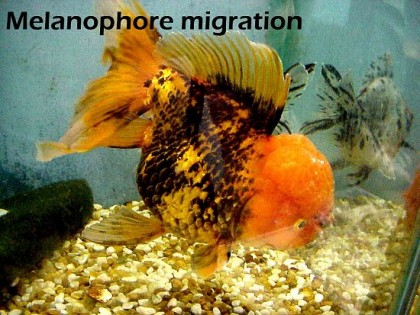 This Oranda had fulminating HEXAMITA infestation. The skin was chewed up and the fins were disappearing. Once cleared, it spent 5 weeks looking like this.

Orange Goldfish Develops Black Patches
“I bought a fish two weeks ago, and a few days after I bought it and carried it home, it started developing dark black patches on its body, especially on it’s back and sides. After a week, the patches began to fade, now it’s almost all orange again! What gives?”

ANSWER:
What you were seeing is called a “MELANOPHORE MIGRATION” – It’s caused by *any* chemical or traumatic irritant or injury on the surface of the fishes’ bodies.

Some good & very common causes include:
#1 cause: Ammonia burn in the shipping bag or the tank.

*HOWEVER*- the black color does not come until the irritant is REMOVED and the healing process begins.

Therefore, it is safe to assume that the fish *was* in bad water or under severe stress until you bought it, and the melanophore migration came and went as usual, starts as healing starts, comes on over two weeks, resides for a week or more, and clears within three to six weeks.

Doc’s note:  Asian distributors are exporting some GORGEOUS tri-colored goldfish with white and red, then a black pattern. A black pattern which can be created artificially with chemicals applied with Qtips or in the water. The black comes in and then the fish are shipped. Six weeks later the black recedes and you have a pretty Wakin, or Oranda, Ranchu or Ryukin with no black at all. Still pretty with just the red and white.

“Blackening and dark spots occurring on goldfish after some trauma to the skin will usually resolve in 3-6 weeks. It’s interesting to note that the black and gold Orandas, as a side note; ALMOST never hold the black*” Doc Johnson

*but are more likely to on black gravel or black liner in a pond.

What is “Flashing” in Koi or Pond Fish?

Phosphate Removers Are A Waste of Money

Salt Dosing Journal for Ich or White Spot – A Case