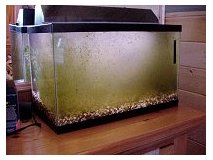 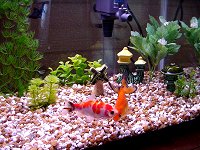 It takes time for these “beneficial nitrogen reducing bacteria” to develop. Under normal conditions, it takes up to six weeks for Nitrosomonas and Nitrobacteria to proliferate to number sufficient to reduce all the Ammonia and Nitrite in the environment. During this time, fish SUFFER with the accumulations.What if we could have “instant” colonization of these bacteria? Well we can. This information is PARTICULARLY relevent to those who are setting up emergency quarantines and hospital tanks for fish they have just bought or which are being isolated for treatments.

Science has always said that these beneficial nitrogen reducing bacteria are sessile, meaning they are attached to the surface of rocks, gravel, sponge material, whatever media they’re grown on. So it would seem like an impossibility that the bacteria can be easily dislodged, transferred into a bucket and put into a fish pond or tank to create an instant “equilibrium” – Right?

That’s exactly what you do. My kids just got fish tanks and of course, I wanted them to have “instant” success, and no “cycle” so I used the bioseeding trick again. This time I made pictures so you could see EXACTLY how it’s done. 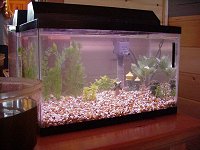 The second system is a ten gallon tank which I set up with an under gravel filtration system (a favorite of mine for Goldfish tanks even though it is “in vogue” to badmouth these excellent performers.

I went outside to my Aquadyne filters and backwashed some healthy “squeezins” from the filters. This greenish brown “junk” is what EVERYONE has in any established filtration system. I collected about a half gallon of it. 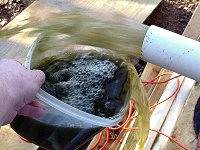 Supposedly this material would only contain filth, because every scientist knows that the beneficial nitrogen reducing bacteria are “attached” and can’t be dislodged. Indeed, this material is EXCELLENT for starting up a complete cycle. 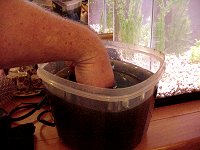 Before adding the material, it should be stirred up. You’re not just trying to deploy the “clear” distillate from over the solids, but indeed the best results are when you inoculate the entire stew into a system.

One of the failures in the first article I wrote on this subject was the fact that it did not have pictures. People couldn’t tell how MUCH of the primordial stew to add to the recipient system. So this time I made pictures so you could see how much gets added.

This picture was snapped as quick as I could put down the bucket of primordial stew and pick up the camera. The top picture shows the gravel at the front of the tank, you can hardly see in even a few inches. Below, you see a pan shot of the tank freshly inoculated. You can make out NO internal furnishings. 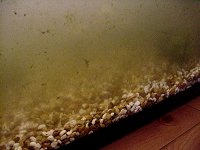 You should be reminded of two things:

1. This will not work without a filter in the recipient system.
2. This will kill fish if you have them in there DURING the inoculation. 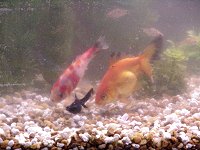 Because I know people are impatient and might want to introduce fish “soon” , I thought, “What would happen if I introduced fish at the “one hour” mark. So I did. And the fish were eating off the bottom (Eating is a very good sign of happiness in fish). You can still see the little chlorine bubbles on the glass where we filled up the tank only an hour before.

The next morning, I was able to shoot these crystal clear images of the tank. We can feed the fish and no ammonia or nitrite accumulations occur. 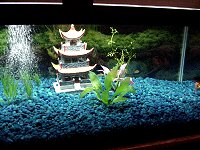 This is a shot of my son’s thirty gallon breeder (fixed up with the traditional decor of a seven year old, blue gravel and pagodas) which was instantly” cycled only the day before Katie’s was. It cleared overnight and has no ammonia or nitrite issues.

What if you don’t have an “already cycled” donor system to get primordial stew from?
A: You can buy the “bacteria” from different companies and take your chances.

OR: You could ask your local pet shop or garden center to wring out some of their filtration media to provide you with a bucket of dark green or brown primordial stew.

RISK! RISK! RISK! This action could result in your purchasing a disease! How do you know that the primordial stew you’re buying doesn’t contain some sort of pathogen for your fish?

Still, there are those “in the know” who might maintain the following two points: If the fish in the donor system look good, chances are the bacteria from their filter are going to be “pretty safe” and I won’t disagree as long as you use words like “Look good” and “Pretty safe” instead of “Completely safe” because it’s not.

Secondly, it could be argued that a prolonged “break in” period, complete with raging ammonia and nitrites, could be far worse than a little case of Ich which you can just salt away.

It’s known that these two bacteria aren’t the ONLY two bacteria which can do this in nature, but for the sake of discussion, that’s all for now.

Are there any other pitfalls?
A: Yes, there are. In this scenario you’re putting an IMMEDIATE biological load on the system. This creates and immediate tax on the carbonates which uphold the pH. If you do NOT supplement the carbonates in some way, a drop in the pH could occur as these bacteria try to “set up shop”. There are numerous ways to hold up the carbonates, including Baking Soda, pH regulators, BuffItUp, more.

SHORT AND SWEET: When you initially set up a new fish pond, there will be Ammonia and Nitrite accumulations which will threaten your fish unless you’re prepared or take evasive measures.