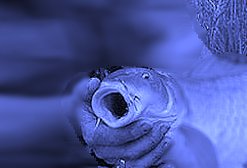 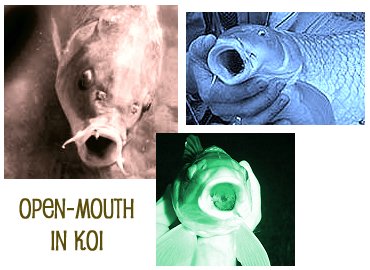 “About 3 months ago we noticed that one of our Koi, a large beautiful pale pink with black markings, seemed to have trouble shutting her mouth. At first she would occasionally close it for just a moment, but eventually it stayed (and stays) open constantly, just a wide open “O”.
At first she still swam with the other fish, but gradually she lagged behind and then would just hang around in one place. Most recently she seems to prefer the shallower water, under a bush overhang. She has obviously gotten smaller, and we have not seen her eat for weeks when we throw out food.

The pond is about 5,000 gallons with a big waterfall and the other fish show no signs of any kind of problems. We have the water tested regularly, about every week, and the only problems have been occasionally low salt which we immediately take car of, plus a little low ph which we have also regulated.

Yesterday I was finally able to separate her and put her in a big plastic storage bin with pond water. I’m estimating it may be about 50 gallons. We have a pump going and we added a little salt and some medicine, “Pimafix” antifungal which also says it treats internal and external bacterial infections. So far we’ve altogether put 3 teaspoons in there. We gave her a little food, but I don’t think she’s touched it.

Now that we can see her better, the only thing weird I see, besides her mouth, is the fact that her head doesn’t have scales on it anymore.
They look like they’ve almost slipped down, kind of like if you were putting a sweater over your head and pulling it down to your neck. It is very even and rounded, like the shape of her head, where the scales start again, right at her gills – like on her neck.
I’m sure I’m not using the right lingo, sorry.

I did not notice any sores or ulcers or obvious yucky places or worms, etc. Just the open rounded mouth and the loss of scales on her head and not eating and lethargy.

If we can figure out how to do it, we could maybe bring her to be seen and treated. I’m amazed that she is alive, frankly, so she must be a hardy fish! She used to be so big and beautiful.

Any help you all can give will be greatly valued and appreciated!!”

Actually, Koi don’t have scales on their heads, their head, foreheads, “cheeks” and under their jaw is scaleless. I never really thought about it before, but they have fleshy “skin” heads –

The open mouth thing is upsetting. There are several possible causes, including ulcer or abscess in the roof of the mouth. Sometimes bacterial infections can dissect along the mouth, and all the suspensory ligaments of the mouth and gill covers, damaging the ability of the mouth to open and close, and for the gill covers to be able to flare. Finding an ulcer in the mouth, on the mouth or in the roof of the mouth would support this. Injections of antibiotics *rapidly* control those infections, but often time the damage to the mouth is permanent. Secondly, a foreign body in the gills or back of throat or oropharnyx could be present. In my practice I have seen stones, rocks, pebbles, acorns, pinecones, catfish, and bobbers. (You will have to handle the fish and look for something in the gullet, like a stone or acorn or pinecone.) In some cases the mouth gets damaged in handling. I’ve seen fish that were roughly handled at Koi Shows and the jaw gets broken. The entire snout simply everts outward, and cannot (for the broken bones and cartilage in the face, cannot pop back in. Success can be had sewing the bones together and tacking the mouth shut. A professional who could do both, the anesthesia and the proper procedure should be consulted.

A digital image down the gullet of the fish, or a trip to the office might be good.

You would simply nudge the problem out the mouth from behind the gill covers, or push the object out from under the gill cover, whichever way it seems it would fit “out” the best. Usually, I sedate the fish in Oil of Cloves and push the problem FORWARD and out of the mouth with a thin stick or sterile applicator (long Q Tip)

“I am so sad. It never occured to us to check for a pebble/rock, and, poor thing, that’s what it was. After she died this afternoon, I picked her up and there it was, blocking her ability to close her mouth or eat. She probably started isolating herself because she was getting so weak. I feel terrible. Such a simple remedy, but in all the stuff I read about Koi during these last months, I never read about that possibility, and it never dawned on me. The fact that no other fish were the least bit sick should have tipped me off. How I wish I had contacted you before and heard this suggestion. Well, live and learn. But she was so beautiful and this was such a waste of a wonderful fish. We probably ended up killing her with the medicine. Thanks for your help. I will keep you in my address book and come to you right away when anything else happens!

I would like to mention one other rather embarrassing thing. My husband and I had never held a fish, or “examined” a fish. We did not think to actually poke around in the fish’s mouth, because up until now we had only looked at fish. No more! I will always, from now on, do that first! Such a simple solution but we didn’t do it until it was too late.”

=CAN WE USE THIS AS A TEACHING CASE?=

“Yes, I would be very honored for you to do that! Then the whole terrible experience would not have been in vain, not to mention the loss of a very beautiful fish. As I mentioned, I could not find anything on the web that helped me figure it out, so this posting will, hopefully, help some one in a similar situation. Thanks for asking! I don’t mind if you use my name, it’s up to you.”