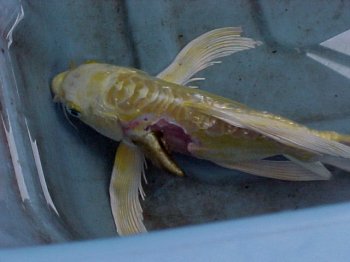 THE KOI WHO SURVIVED A PUMP

Lucky came in with a break in his tail. The first night here he was sucked to the pump. The next morning he was found to have a big red colored bulge on his side. The picture below was taken on August 12th 1999.

A week later the red disappeared and the real damage was evident. Using small scissors, I carefully cut away the flap of dead tissue. His appetite was good and he was getting along good with the other fish so I left him in the main tank. I did add .3 salt to the tank.

This picture shows the full extent of the damage the fish suffered once the flap of skin was removed. On the advice of Erik Johnson DVM, author of Koi Health and Disease, I did nothing but maintain pristine water conditions and salt. The fish continued to make good progress. I was very tempted to do euthanasia on him once I saw how bad the fish actually was.

Three months later all that remains is a small bruise where there was once a big gaping hole. I am confident that he will continue to make good progress.

This is Lucky swimming for his picture. You can see the slight indentation where he was sucked to the pump and the knot where there is a break in the tail. 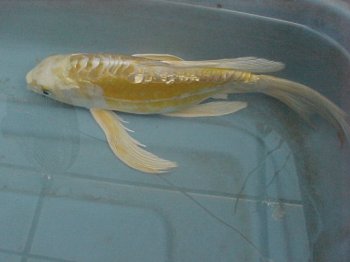