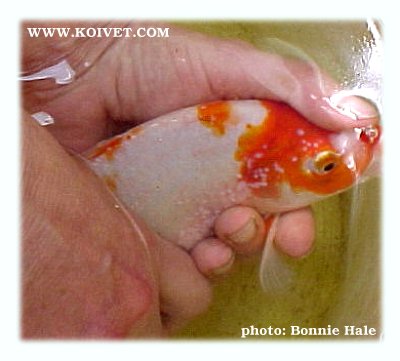 Carp Pox should be differentiated from other viral and non viral eruptions with a microscope. In very cold water, there are strains of Ich which will coalesce into large gel-like globs instead of causing the dusting of white spots. Biopsy is important.

This fish came to me with Carp Pox and a horrible case of flukes. Fortunately there were no open sores, fin, tail or mouth rot that is commonly associated with the flukes.

Note the Carp Pox on the body. It shows as “pinkish” colored spots.

The fish came out of a cold pond that had a temperature of 55 degrees. The method of treatment was to warm the water up to 80 degrees. I have found that in treatment of other fish with Carp Pox that heat alone will cure it very nicely.

The hospital tank was set up and salt added to bring it to 0.3% salinity, which is always, my first step in treating any fish. A heater was added to the 25-gallon tank and set at 80 degrees. I then added 3 fluke tabs (PraziPro nowadays) that were pre-dissolved to the tank.

The major difference is that this fish had the pox all over its body. You can see how the spots look small and “pinkish” in color.

Carp Pox and Flukes Resolved With Heat and Salt

Also, Koi Salting is discussed in the following video.