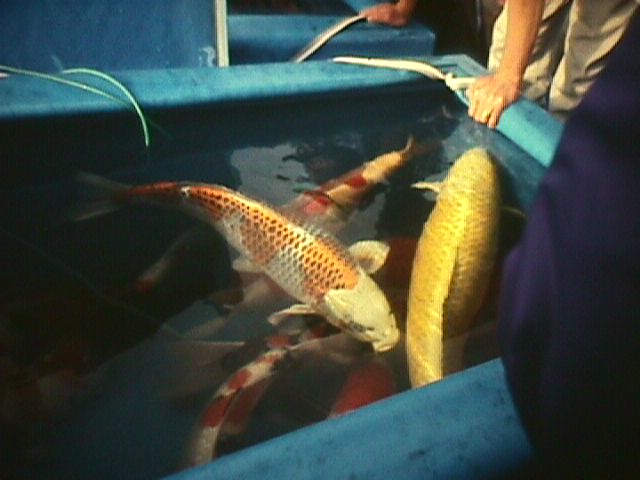 2019: It is my opinion at this date that the best most humane way to euthanise fish is to give them an overdose of anesthesia in a sizable container that is not cramped. Then, when non responsive, put them in the freezer until they are a block. For much larger, too-large-to-freeze-fish, anesthesia followed by baton or decapitation would be humane as well.

Euthanasia in fish – by Doc Johnson

Abstract: It is unsettled whether Koi and other fish can feel pain, or if they do, whether they subjectify the sensations quantitatively, or as “painful” – Therefore it would be preferable to assume they do, since that’s very easy to accommodate.
As of October 2019 I believe small to medium fish that are easily handled should be anesthetized with a stout (double or triple) dose of anesthesia such as Oil of Cloves. Too much would cause changes in water quality that might even be severely irritating. When the fish is completely asleep the entire fish-water assembly is transferred to the freezer.
Large to very large fish would be anesthetized in a larger vat. When completely anesthetized, they may be elevated from the water and the skull above and between the eyes fractured and or opened with a fish baton available at bait shops. I’ve used a hammer on one very large fish. Alternatively the fish could be decapitated, but again, ONLY in a fully anesthetized condition.

…Should be considered when a fish is intractably ill or deformed by disease beyond hope of salvation. Many fish have been euthanized due to exposure to Koi Herpes Virus in recent years.

It is believed that a fish feels no deep pain because they have no spinothalamic tract. Still if they are hopeless, euthanasia is a humane choice.
Ideally, anesthesia and hypothermia is the recommended way to dispatch a fish.
Place the fish in a modest amount of water so that it may recline upright and comfortably. It should not spend its last moments frantic for water. Place the bowl (or bag) in the freezer and close the door, providing darkness. As the poikilotherm (cold blooded animal) loses heat, the enzymes that sustain consciousness are inactivated and they lose sensation and finally all systems eventually arrest, painlessly and completely.
Alternatives would involve severing the head behind the gill covers.
For larger fish, a sharp blow (with hammer or other weighty object) to the head between the eyes is effective. Then the head is severed.
“My favorite method is the freezer method, with plenty enough water for the fish not to feel alarmed.” ~ Doc Johnson
Many people add the step of sedating the fish in Oil of Cloves or Finquel and then, when the fish is totally unawares, they decapitate or freeze. When you see the fishes’ reaction to the taste of these sedatives, you’ll wonder if you soothed the fish at all. However, over-sedation before any euthanasia [or even as a form of euthanasia] procedure is endorsed by the AVMA.
There was a long discussion on the message board which contributed to my thought process on this. I’d like to copy my responses here for your consideration.

1) “Animejet” describes terminal Dropsy, so she’s not a beast.. She said; ALL the scales were standing up, all over. That’s “dropsy”. So, folks, we’re not talking about a survivable situation. If she said her fish simply had some sores and she was giving up, I’d be on the side of “Jeanbergeron”.
2) JanetMermaid relayed that her fisheries biologist said: “freezer causes the animal a fair amount of pain” which could NOT be true of teleost fish. They have no LATERAL SPINOTHALAMIC TRACT. There was a misunderstanding. A more recent article (2/2/2004) demonstrated the fishes’ inability to subjectify pain because it lacks the neocortex used by homonids to do so.

Pain from freezing euthanasia and “spicules of ice” forming in the tissues. Note: Fish are poikilotherms and are incapable of movement sensation and and response when shocked by a temperature drop of the magnitude that might cause frost damage.

3) A good point was made: Freezing really large fish WOULD indeed be cruel from a logistical standpoint because of the physical realities of putting a twelve pound fish in the freezer. Good point. I didn’t think of that. My advice on freezer euthanasia refers to the average six to eight inch household goldfish.
4) Cutting this same twelve pound fishes’ head off (decapitation) would be equally cruel. Have you ever seen a timid neophyte chop the head off a mere *two* pound fish in a wet lab? Can you say “repetitive sawing action” – There’s a good bit of bone in the area and the fish will suffer considerable anxiety.
5) Large fish = Use a fish Baton. Smack them on top of the head between the eyes as hard as you can and try and cave something in. I am sorry it’s gross; but I am speaking from experience with women and men who close their eyes, turn their heads, and whack the fish timidly on the head expecting it to die, and they only piss it off.
6) Someone correctly noted that the fish does “flash” when parasitized, and it can and will avoid contact with stimuli which makes it uncomfortable – there’s a lot that the INTERIOR spinothalamic pathways can conduct – but (supposedly) not pain.
7) Another person mentioned, correctly that in winter, their fish are not unconscious at thirty something degrees during winter. The premise becomes that the fish in the freezer is also conscious at thirty something degrees while it dies. This would be true if the fish came from an icy pond and you tried to freeze it to death. If the fish were from your living room, it would be shut down with the first twenty degrees drop in water temperature. The reason for this is “iso-enzymes” – It has to do with how poikilotherms, (cold blooded critters) survive in hot, then frigid environments.

Here’s how that works:
In warm weather, cold blooded fish use warm-water enzymes. As it gets cold, they produce and use more and more “iso-enzymes” which function in ice water. This is gradual and natural.
A rapid rise in temperature destabilizes the cold-water iso enzymes structure and the fish dies. The opposite is true of the warm weather poikilotherm enzyme system.
Briefly:  isoenzymes_same_enzyme_different_temperatures

Fish should be spared fear, and discomfort. And I am not AT ALL arguing that fish don’t feel discomfort, or interpret anxious situations, because they do. In that assertion, “anti-anglers”, and people who don’t want their pet fish to suffer an agonizing death are correct.

I think the emphasis should be on speed. Interpret the condition of the fish, it’s anxiety about being handled, and it’s overall size when choosing an overdose, freezing, a fish baton, or decapitation. Whatever you do, do it without anxiety, discomfort, and do it agilely and swiftly.

I think differentiating (on behalf of the fish) between freezing or oil of cloves is semantic. Have you seen how the fish “dash and sputter” in Oil of Cloves? I don’t think they like it, but it’s for their own sake.
Again, whatever you do, do it for the fish – not for convenience. Make it as short, sharp and swift as you can think of.
Best regards
Doc Johnson