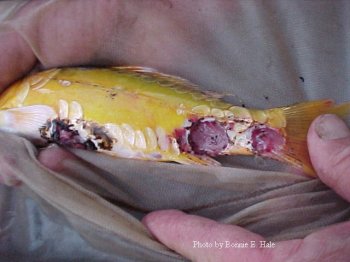 Day one: The Koi had 5 large ulcers, 2 one side of the tail and the other 2 were on the opposite side of the tail. In addition there were 9 small ulcers that were approximately 1/4″across on the other side of the tail. The 5th ulcer completely took out the pectoral fin. Fluke tabs (Now we use Prazi) and salt to .3 was added the first day. I really did not think this fish would live through the night. I expected that he would pine cone at any time.

Day 3: The ulcer that took out the pectoral fin and socket is now visible. There is now slight healing tanking place in all of the ulcers.

Day8: The koi is making good progress. All flukes are now dead. Salt is at 0.3% 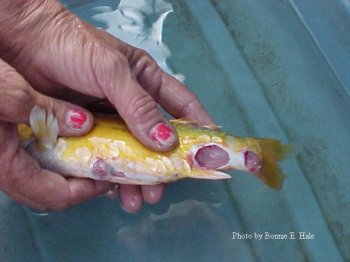 Day12: These are pictures of 6 of 9 smaller ulcers. The koi is making good progress now.

Day 12: The koi is improving greatly now and appears that the antibiotic regime is working.

Day 21: Progress was still being made and recorded on the 21st day. This was the last picture I had taken. Unfortunately, the koi died on the 31stday. All of the 9 smaller ulcers had completely healed. The 5 large ones were approximately 80 percent healed. Autopsy did not reveal anything remarkable. 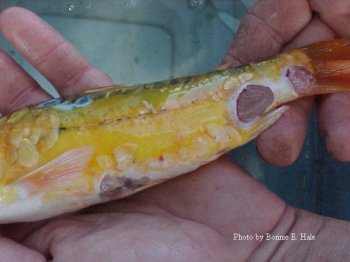