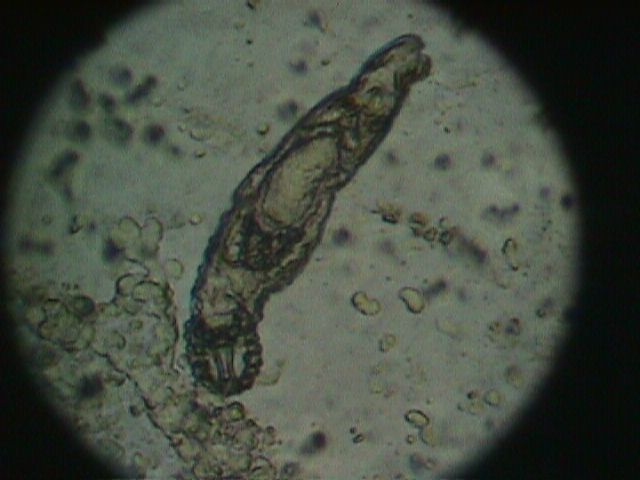 Flukes are the NUMBER ONE cause of Ulcer Disease in Koi and Goldfish. They are the principle vector of Aeromonas from fish to fish! Their hooks and haptens damage the skin and introduce these bacteria into the skin.

Freshwater flukes occur in all parts of the world on numerous species of fishes. By their name, you might expect them to be visible to the naked eye, however, they are microscopic.

Flukes are easy to diagnose microscopically. A skin scraping should be taken with a plastic coverslip from under the chin, between the gill covers. Another sample should be collected from the side of the body; scraping from there and out onto the tail and off the tip. The mucus is placed with a drop of pond water on a slide an viewed at 40x total magnification with the iris diaphragm closed down, and lighting low enough for comfort. You should see ‘wormy’ looking organisms. Usually they are extremely active. They are capable of elongating and contracting with both amazing speed and dramatic agility. THEY ARE THE ONLY THING YOU SEE UNDER THE MICROSCOPE THAT’S “STRETCHY” so that’s an easy diagnosis.

Especially in water containing 0.3% salinity, usually flukes are all you could hope to see because the other types of parasites (ciliated protozoans) are annihilated by that salt level.
Their primary mode of killing would ostensibly be through the accumulation of large numbers. Especially in fish fry, the numbers of flukes encountered are accepted as the cause of mortality simply because they take such a toll on the victim when they occur in large numbers. Based on observations made in practice, however, I would like to introduce my opinion of how just a few flukes can kill a larger fish:

In the process of attacking a host, the flukes dig deeply into the epidermis and gill tissue with their haptens. Regardless of species, the flukes are known to carry and inoculate pathogenic bacteria. Flukes from certain areas, and on certain batches of fish carry more and more dangerous and virulent bacteria on their haptens. In this way, discovery of a few flukes on the gills or skin can account for rapid and mortal outbreaks of Aeromonas and Pseudomonas furunculosis (Ulcer Disease).

Control of flukes has become increasingly easy with contemporary medicine. Potassium permanganate has been shown to be effective when applied as an eight hour bath at one gram per hundred gallons (2 ppm) or when dosed daily at 2 ppm for five days consecutively. Alternatively, some have found that despite it’s negative effects on fish and filter, that Formalin is effective in eradication of fluke adults, with a second treatment (three days later) serving as clean-up for the emerging young.

Best of all: PRAZI PRO which is simply an affordable solution of Praziquantel which has no impact on filter bacteria and is risk free with the fish. Follow label instructions.

Excellent pricing exists on Praziquantel (Droncit) in a fish form with drastically reduced cost over the veterinary version.

The following is a video with micrographs and video of flukes under the microscope. Also in my Youtube channel are videos and discussions of the common treatments.