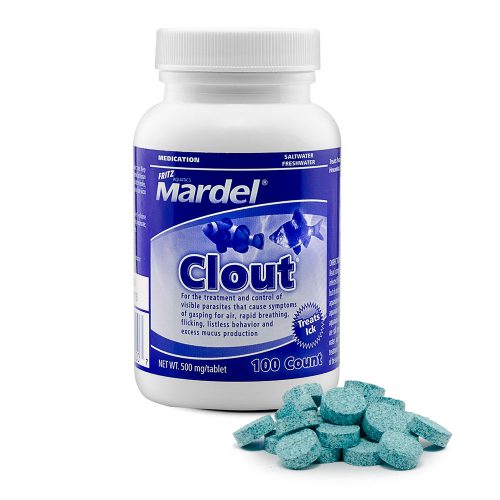 Mardel’s Clout was removed from the market because it contained trichlorfon. Which was fine, except it was a pretty strong chemical and the FDA / EPA didn’t like it. It could cause cancer and it was a neurotoxin. Allllll-righty thennnnnnn.

What’s in Mardel Clout? How Can We Replace It?

This is what was in Mardel’s Clout.

With the above, you’re treating most of the ciliate parasites, most of the trematodes and even the crustacean parasites like fish lice and anchor worm and then also, hexamita and spironucleus.

Trichlorfon has been eclipsed by two medicines which are entirely safe. Dimilin (or similar), and Praziquantel combined match or exceed trichlorfon, without any health risks to the fish or plants.

Trichlorfon was compared to Praziquantel:

“…testing the effects of trichlorfon (0‐7ppm), praziquantel (20ppm) and copper sulphate (0‐25 ppm) on adult monogeneans in situ, and on adult monogeneans, oncomiracidia and eggs in vitro. One treatment with praziquantel eliminated 100% of the worms from the skin of rays. Two treatments with trichlorfon only eliminated 81% of the worms. Praziquantel killed all worms tested in vitro within 6h and prevented egg deposition. Trichlorfon killed all worms within 21 h, but some eggs were deposited. Copper sulphate had little effect on worms in vitro. Both trichlorfon and praziquantcl immobilized oncomiracidia while copper sulphate had little effect. Eggs were relatively resistant to these chemicals; however, trichlorfon and praziquantel were the most effective in killing eggs.”

And Praziquantel won out, by a lot.

Trichlorfon was a two-parasite “medication” and it’s kind of hard to find now. For good reason – it’s kind of risky to use on certain fish.
But trichlorfon controlled:
Flukes
Crustacean parasites

You can get the same “kill” spectrum as Trichlorfon with CyroPro and PraziPro combinations.
Or, Microbe-Lifts Anchor Worm and Fish Lice Cure, and API’s General Cure.

Clout also had Malachite green which was ‘good’ at killing Ich and other ciliates.
Finally, Clout had metronidazole. That’s good at Hexamita and Spironucleus.
So there wasn’t much that Clout couldn’t do.
Fortunately, there are medicines out there which contain the same “stuff” and, or, control the same ‘things’.

To match Mardel Clout, you would need:

Crustaceans: Cyropro or another Insect gyrase like Microbe-Lift’s Anchor Worm and Fish Lice Treatment. (Would be same-effect as trichlorfon)
Trematodes: Praziquental -As in Prazi-Pro or API’s General Cure – Effective against trematodes like Trichlorfon in Clout
Ciliates: Malachite Green – the active in API’s Super Ick Cure.
Hexamite and Spironucleus: Metronidazole – effective against Hexamita and Spironucleus

So here are some combinations of note:

To kill ciliates, trematodes, hexamita and crustacean parasites, like Clout: You could use CyroPro, API’s “Super Ick Cure” and API’s “General Cure”.

Or, you could use API’s General Cure and Microbe-Lift’s Anchor Worm and Fish Lice Treatment, and Microbe Lift’s BSDT.

But here’s the thing.

Hexamita is comparatively rare, and the Metronidazole isn’t THAT important unless you’re shotgunning a wasting disease or something with Discus.
And crustacean parasites are (eventually) visible with the naked eye, so you will be able to TELL if you *have* to treat with a gyrase.

So if you “skip” worrying about Hexamita, Spironucleus and the macroscopic (visible) parasites – all you’re REALLY gunning for are ciliates and trematodes.

So the following combinations would be ‘fine’.

All of the above have a similar spectrum except the “salt” options aren’t germicidal/fungicidal which is a ‘good thing’ *and* a ‘bad thing’.

It should also be noted that “Super Ick Cure” contains no Formalin and so its spectrum is not QUITE as “good” as Microbe-Lift’s BSDT.

So, given ALL the above, what should you use when you’re shotgunning?

I’d use Super Ick Cure and General Cure in combination along with warmth and really clean water.

If I couldn’t get warmth, or I was seeing bacterial or fungal infections (white patches and rotting fins and mouths) I’d skip the Super Ick Cure and use Microbe-Lift’s BSDT.

Tetra’s Lifeguard product is pretty much “alone” on the market with: 1-CHLORO-2,2,5,5-TETRAMETHYL-4-IMIDAZOLIDINONE
It’s a “halamine disinfectant” and it’s been created with several molecules including Chlorine, Flourine, and Bromine.
The Lifeguard product is VERY close to Chloramine-T
But it kills more stuff, and it kills stuff faster.

How It Works:
They put the halamine compound (1-CHLORO-2,2,5,5-TETRAMETHYL-4-IMIDAZOLIDINONE) into a chunk of magnesium sulfate. When you put that into the tank it dissolves / dissociates slowly over 6 hours to release UP TO but NOT MORE THAN 20ppm of the compound. That’s kind of a ‘thing’ because if the compound were to dissolve faster it would exceed 20ppm and burn the fish. Follow label instructions CLOSELY. Note that the chunks treat the system for roughly 6 to 8 hours- – which is why you have to reapply on the daily for several (5) days.

Here’s this on the active:
Many environmental stressors are associated with the intensive culture of fish. These include poor water quality, overcrowding, insufficient dissolved oxygen, rapid environmental changes, poor nutrition and poor handling practices. The stress induced by these environmental and management practices can result in reduced growth, poor feed conversion as well as increased susceptibility to disease. Outbreaks of most parasites and many bacteria, including Flavobacterium columnare can also follow stressful episodes and if not remedied disease can occur. Few therapeutants are available for the treatment of disease in fish populations, fewer still that will work in both fresh and saltwater. One class of compounds, N-halamines, originally developed as human drinking water disinfectants, has shown promise against external parasites and bacteria of both freshwater and marine fish. The compounds are 1,3-dichloro 2,2,5,5-tetramethyl-4-imidazolidinone (DC) and 1-chloro 2,2,5,5-tetramethyl-4-imidazolidinone (MC). N-halamine compounds are so named because of the presence of one or two chlorine atoms (halogens) attached to a carbon ring structure. The precursor of these compounds is a stabilizer of free chlorine or a chlorine adjuvant. The stabilizing action of the ring structure reduces the toxicity of the chlorine to the animal and prevents bromine substitution in saltwater applications. This presentation will provide an overview of the research conducted to date using these compounds in the treatment and prevention of diseases in fish and shellfish as well as providing an update on the progress made towards establishing an INAD.