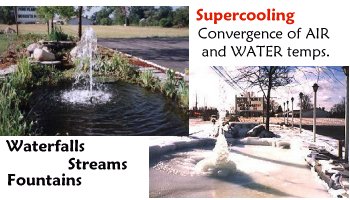 Koi Fish Pond SuperCooling: What Is That?

Supercooling – When you want a cup of coffee to lose heat, the fastest way is to pour it through the air from cup-to-cup until it has lost it’s heat.

And in the same way a waterfall and fountain can propel your water through a thin-phase causing a convergence of air and water temperatures. This means that by day, your fish will warm faster because the water can pick up heat from both sun and air, but by night, the pond plunges down as the water gives up it’s heat passing through the water feature.

Here’s how the typical case appears. This is a true, documented case:

“This is real strange again. On Thursday a fish was laying on its side at the bottom of pond. For all appearances he was dead. But when I got the net out to retrieve him, he swam away. This is a 12″ Kohaku that is in my main pond outside….”

“An hour later he was back on his side so we netted him out and I did slides, 2 from gills and 2 from body. Nothing! The ammonia, nitrite and nitrate are all zero. Ph was 8.2 which is normal for me. Water temps was 38 degrees. …”

“I put him in a 20 gallon tank inside and let the water warm up from the 38 degrees to about 62 on its own. He swims upright and does not lay on his side at all now that he is inside. There are no marks, ulcers etc anywhere on his body. Gills are bright red in color. He acts totally normal now that he is inside. Swimming and staying upright. My hubby said maybe he just wanted to come in from the cold so that is why he was playing dead. Surely that cannot be the answer!”

“We are having and been having big temp swings the past few weeks. I have been feeding Impact every few days if the water temperature warrants feeding….”

“The thing that bothers me is the 4 fish I lost in March did the same thing, they just laid on their side and moved when you tried to net them. They eventually died.”

‘We are having and been having big temp swings the past few weeks. I have been feeding Impact every few days if the water temperature warrants feeding…..The water fountain (3900 cal pump) shoots the water up 10 feet…”

When fish are rapidly chilled they lay over. Laying over is seldom  more than a clinical manifestation of shock/severe stress.
When brought and slowly warmed up, they usually recover, but they ought to be injected with antibiotics at least once, or they will die a week after warming up. This is because the bacteria will traverse the gut when the fish is nearly frozen and proceed to kill it later.

Do not feed when you think, or even imagine, there’s even a 2% chance of dropping below fifty degrees (F) within three days of feeding..

Koi Fish Pond SuperCooling: What Is That?