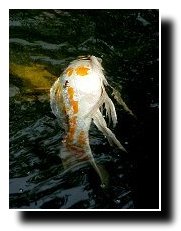 Hydrogen Sulfide is not a common problem in fish ponds, as far as we know. (It *is* a problem in fish tanks, though. Especially at a major cleanout and with disruption of the sand / fluorite etc.)

What this means to pond people though, is; pond people don’t test for Hydrogen Sulfide much, so we don’t really know whether it’s common or not.

Here’s how Hydrogen Sulfide is produced: A plant is set on the bottom of the pond. Or a huge statue. Fish wastes accumulate under the large and heavy object. Every time your spouse suggests you clean out the grossness under this large and unwieldy item, you come up with an excuse. Ooooh my back! So it doesn’t happen for a long time.

Anyway, after three years, a black stain appears in the center of the wastes trapped there, and in the black stuff, there are bubbles of gas. These are hydrogen sulfide bubbles. The smallest amount of hydrogen sulfide will start killing your fish. Especially if those bubbles are swept into the water column suddenly.

What’s happening in the stagnant media is that a bacteria exists in areas WITHOUT water movement and WITHOUT oxygen. In the opportune spaces, the bacteria make hydrogen sulfide gas.

As it accumulates in the water, the gas causes weakness, increased vulnerability to disease, and finally obvious symptoms of brain damage and death. Enough hydrogen sulfide could kill you in an enclosed space.

Clean up isn’t easy. If you suddenly decide to run the test for Hydrogen Sulfide and you discover that the huge statue is trapping it underneath, you can’t just go in and yank out the thing. Removing the object which is trapping the gas would liberate large amounts of hydrogen sulfide all at once; and all your fish would be dead before you could get them out of the pond.

You need to remove all the fish from the pond before the cleanup operation is begun.

SHORT AND SWEET: Hydrogen sulfide is a problem in stalled sand filters or ponds which contain layers of sediment on the bottom or in large and neglected planters.