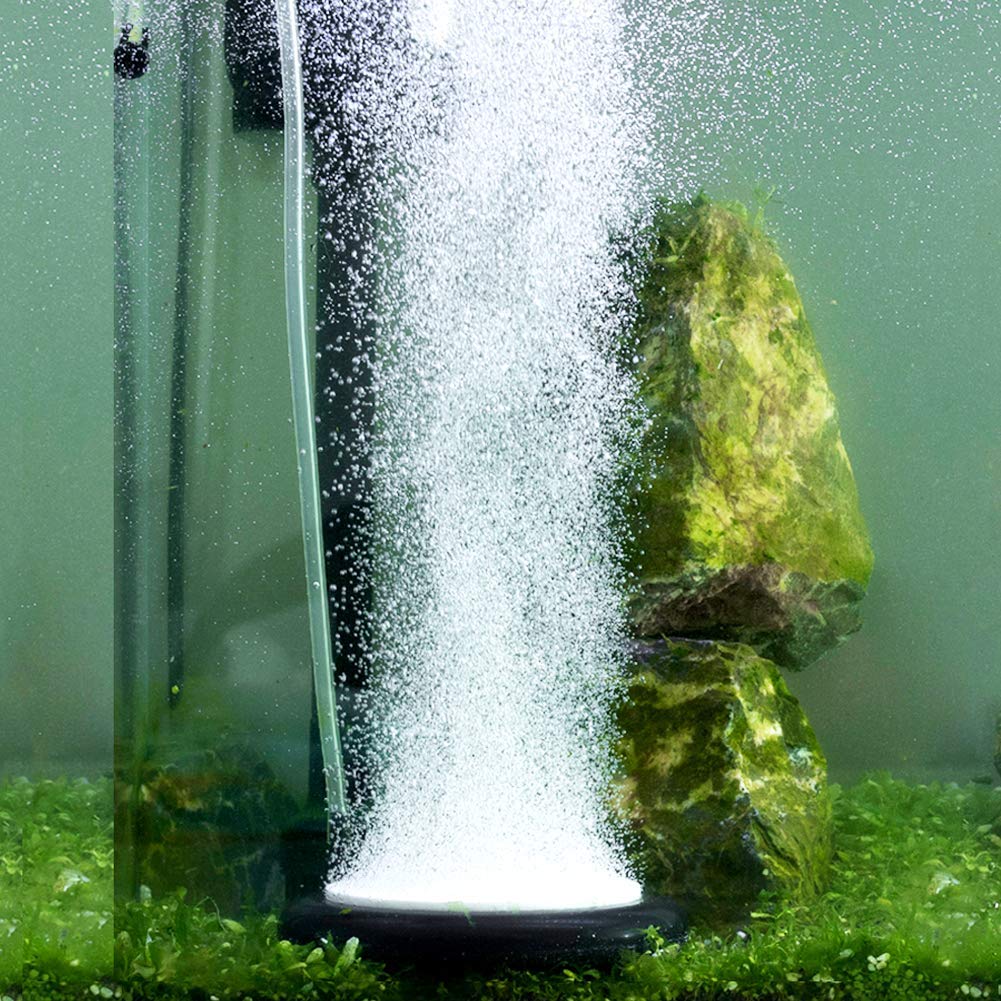 *Air Stones* – Retailers sell electronic pumps which force air through tubing into a porous stone. The air emerges as a column of tiny bubbles in the water. This carries water upward for gas exchange at the surface.

*Osmosis *- Molecules of gas and liquid will always attempt to disperse evenly throughout an environment. An example would be a cloud of smoke, which does not remain motionless in one corner of the room. A drop of ink placed gently in a bowl of water will, by morning, tint the whole bowl a nice uniform color. This is osmosis. The gradient refers to an area of high concentration and the area of lowest concentration. The gill is a membrane. Inside the fish there is Ammonia and Carbon Dioxide. Outside the fish, there is less of these compounds. So these molecules passively osmose through the healthy gill into healthy water. When carbon dioxide and ammonia accumulate in the water, there is no gradient from high to low, so these compounds are not dispersed via osmosis, and the fish dies. If the gill is damaged, and the membrane thickens or cannot allow the osmosis to occur, the result is the same.

*Sponge *- Sponge material is commonly used in filters to support the growth of beneficial bacteria but the sponge also removes solid wastes mechanically. Ever so often you have to remove the sponge and clean it in a bucket of pond water. Lift with your legs.

*Flooming* – To maximize oxygen content in water, surface exposure is required. The best way to expose the most water to the surface for oxygen mixing is by flooming . A pump is simply used to pump water upward toward the water’s surface. There does not need to be ANY splashing, unless you like it. Just put the pump on the bottom of the pond and aim the stream up, to create a gentle water swell. Here; collossal amounts of gas exchange will occur.

Biofilm from certain media such as sponge filter media can be wrung out / off of the media and into suspension, and this brown “filter squeezin’ can be transplanted into a new bio system and will colonize the new recipient system basically ‘overnight’

*Flooming pump* – a pump designed to accommodate the desire to floom the pond. This pump should be able to discharge upward and resist clogging.

*De-gassing* – The exchange of carbon dioxide, oxygen and nitrogen at the water’s surface as the water comes into contact with the atmosphere. De-gassing is heightened in waterfalls or other forms of extreme water agitation.

*Biofilm *- This is a very thin layer of microbes (or slime) which forms on all submerged surfaces of the pond. The microbes in this “biofilm” are heterotrophic bacteria which utilize organic materials and also a considerable population of nitrifying bacteria which use Ammonia and Nitrite for energy. Biofilm from certain media such as sponge filter media can be wrung out / off of the media and into suspension, and this brown “filter squeezin’ can be transplanted into a new bio system and will colonize the new recipient system basically ‘overnight’ – but watch for pH Crash after you do that. The carbon dioxide production and carbonate consumption of the transplantation process can drop the pH precipitously.

*UV *- Ultraviolet clarifiers are part of a good fiiltration system. They are basically configured as cylindrical chambers with a very special light bulb inside. THe light bulb emits ultraviolet radiation which can kill tiny microorganisms as they pass through the UV. The UV is excellent for killing bacteria and algae. Larger organisms like parasites may not be killed unless the UV is very powerful. It’s important not to flow water too fast through the UV because water must be in contact with the UV for a certain period of time for the killing effect on teh bacteria and algae to occur.
Doc Johnson