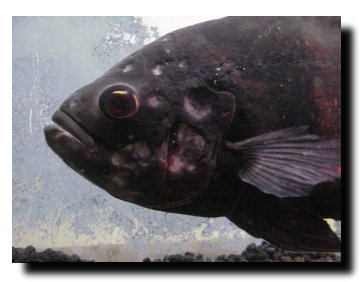 At one time, I might have denied that Hexamita could be a serious dermatological pathogen of Koi, goldfish and pond fish. Recently, I have seen cases of severe skin and fin erosion that defied explanation until the Hexamita organisms were detected in abundance on the surface of the fish.

While their presence could have been incidental, it is persuasive that just a pair of treatments using Metronidazole in the water at 500 mg [five hundred milligrams] per ten gallons of water, resulted in complete recovery of the fish.

Hexamita is a tiny, flagellated protozoan parasite, which was at one time associated with “Hole in the Head” lesions in the mighty Cichlids and Discus of tropical fish fame. Later research suggested that “Hole in the Head” was a multi-factorial condition, which involved inadequate nutrition, inadequate lighting, and poor water quality. In particular: High levels of background pollution most specifically nitrates and high carbon dioxide levels. Hexamita was then downgraded in terms of its aggressiveness. But with the advent of a few of these cases, I am filled with a new respect for Hexamita as (sometimes) a serious threat to Koi, goldfish and pond fish health.

The clinical appearance of Hexamita’s attack is principally related to a general lethargy of the fish, followed by significant erosion of the fins and skin. The body may become entirely milky and the slime may come off in strands. The fins begin to look as though the tissue between the rays is being eaten away.

The video version of Hexamita – Protozoan Infection in Fish