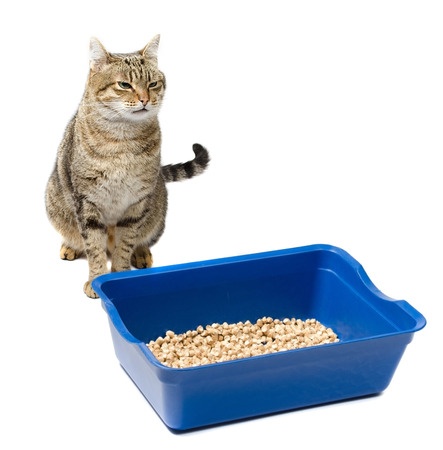 If your cat pees outside the litter pan, this article will probably be better news to you than an incurable virus that only infects white supremacists.

I just happened to be walking through a big box contractor store and I saw these concrete mixing pans and it made me think of study that I read about 10 years ago that has served me very, very well in practice.

There is a college with a very good relationship with surrounding veterinarians. They were doing a study to figure out which kind of litter was the best to attract cats back to the litter pans (cats that were prone to peeing outside the box). They solicited about 100 cats from these area veterinarians to submit to the study. They tested litter like dirt, sand, vermiculite, peat moss, clumping litter, clay litter, scented and unscented litters. They got variable results with no clear winner.

Then they looked at variables that they had not controlled and they noticed a consistent result related to the size of the litter pan. In fact they noticed that the litter pans that were larger and not just a little bit larger but a lot larger were very successful in attracting the cats.

So they repeated the study with large litter pans. On par with small concrete mixing pans and had a conversion rate of around 70%.

That was huge. Improving on that in my practice since then, I have suggested using a counter intuitively *small* amount of litter, of the unscented unclumping plain clay litter at only 1 inch. It’s brought back around 80% of inappropriate-elimination cats.

And here’s why, and this is only my theory. I believe that when a cat starts to pee outside the litter pan people put more and more litter into the box. It makes sense to make it easier for the cat to bury their material. But it also creates an unstable footing and they get their feet buried in the litter. Worse, having the feet sinking into the litter sucks when the litter is a clumping litter.

When a cat starts to get clumping litter in between his toes it snowballs from there. Almost litterally. Ha ha ha litterally! Did you see what I did there?

I started to get a very high rate of conversion without the need for Prozac, caging, two pans, Feliway, earnest pleading and other calisthenics.

And I personally believe that for some cats, scented litter is like those old ladies who have no idea how strong their perfume is. Consider how strong a cats sense of smell is.

Anyway, so when I started to suggest *plain* clay litter at *1 inch thick* in these large concrete mixing pans, I started to get a very high rate of conversion without the need for Prozac, caging, two pans, Feliway, earnest pleading and other calisthenics. And saved a lot of cats being thrown outside.

But then again, keep in mind that among all the cats that pee outside the litter box, 20 to 30% of them are just asshats.

Now, I would also say this: nothing’s going to work if the cat has severe miliary dermatitis because they often complain about that, (and fleas) by peeing. And also nothing is going to work if they have a bona fide urinary tract infection so those things need to be ruled out.