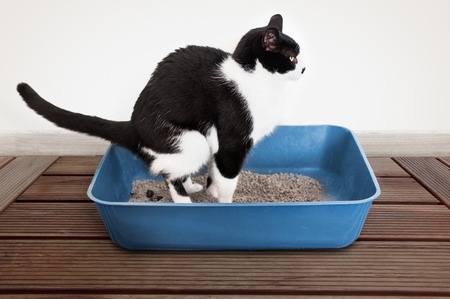 Stopping behavioral disorders which result in cats peeing outside the litter box is VERY difficult, I daresay, impossible to control entirely.

Feline Urolological Syndrome (FUS) is a disease of cats that can manifest itself in a variety of ways.

* Usually there is straining to urinate,

* increased frequency of urination, and the

* appearance of blood or “sand” in the urine which can lead to complete blockage of the urinary tract.

* frequent attempts to urinate with the passage of only small quantities of urine.

* Blood can be seen in the urine.

* Urination in inappropriate areas can also be observed.

* Male cats with urethral obstruction may also cry frequently and lick themselves under the tail.

* They may be unable to pass urine and will strain frequently, which may be confused with constipation.

* As uremic poisons accumulate, the cat will become depressed, lose his appetite, and may vomit.

Blockage is more common in male cats, and is often severe. Because blockage prevents the normal passage of urine, waste products normally eliminated by the kidneys accumulate in the cat’s blood stream and can lead to “uremic poisoning”.

The cause or causes of FUS are still controversial. Researchers feel that dietary compounds, viral infections, urinary acidity and possibly environmental factors all may play a role. The lack of a definitive cause of FUS makes it difficult for us to design a universal treatment plan which is consistently successful. Therefore, some cats will have recurring episodes of FUS.

Signs of FUS indicate an emergency condition and immediate veterinary care is required, or severe kidney damage and finally, death due to uremic poisoning may result.

If a cat with FUS has urethral blockage, we attempt to remove the obstructing plug by gently flushing with a sterile solution. While there is some risk of urethra or bladder rupture, this rarely occurs. We usually place a catheter in the bladder to permit the emptying of the urine and hopefully the excretion of the sand while other medicines are given. Within two or three days the catheter is removed, and with any luck, the cat remains un-obstructed, and is placed on a special diet. Long term complications of urethral blockage include loss of bladder tone, secondary kidney damage, bacterial infections of the urinary tract, and recurrent blockage.

If the cat is showing signs of FUS without blockage, we usually begin treatment as an outpatient.

The type of therapy that we recommend will vary, depending on your cat’s condition upon presentation. If there is indication of a bladder infection, we will place your cat on antibiotics, usually for 7-10 days.

The need for antibiotics may be shortened (or their effect enhanced) by acidifying the urinary tract with a special diet made to lower the urine pH. Examples are Hill’s C/D and W/D prescription diets.

Regular urination can be encouraged by frequently cleaning the litterbox. We also advise feeding your cat a low magnesium diet (ie: O.1% MG in dry matter).

Giving distilled water has also been shown to be favorably influential.

* Prescription Diet C/D or S/D for the first few months after FUS episode.

* Can be on Feline C/D or the lower calorie W/D as long term diet.