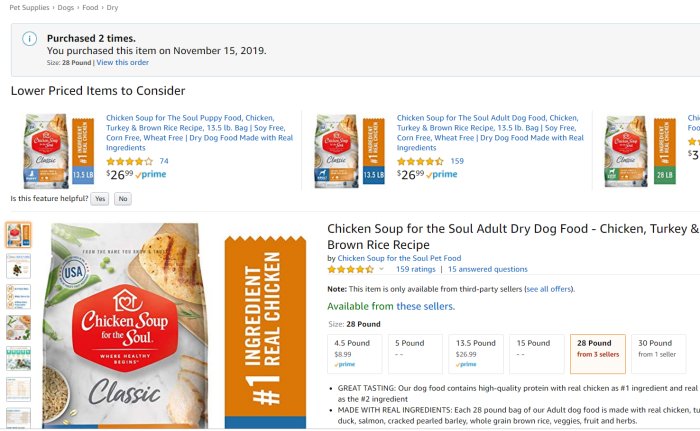 Hi, Dr. Johnson,
Just ran into this article on the internet and was horrified that the food from Costco that was recommended to us is on this list. Should we stop feeding the “Nature’s Domain” to our dog?

Answer to: Can My Dog Food Cause DCM? Cardiomyopathy?

A diet that’s truly “grain free” BUT IS ALSO based on Peas and Lentils = Lacks Taurine.
And that lack of Taurine can (in SOME DOGS) result in Dilative Cardiomyopathy.
It’s a popular article for news agencies to pick up. And more is being made of it than is necessary.
Still, since release of the ‘concept’ however much I do or do NOT attach to it – –   I have been feeding my dog Ajax a diet with rice in it, and NO peas and lentils.
I wrote this:    https://drjohnson.com/dcm-linked-to-grain-free-diets-especially-with-legumes/
A few months ago.
There really isn’t MUCH to be worried about.
What I Feed Ajax Since Leaving Ultra Low Carb
https://amzn.to/2rt49UM
Could this “DCM” Effect be real?
I think so. More than a decade ago they discovered that cats have a requirement for Taurine and cardiomyopathy (among other morbidities) could be the result. In the scheme of things, it was a minuscule problem, but dietary modifications were made across the board. In this case, I believe that a small number of dogs which are fed highly refined grain free diets MAY be missing a core ingredient we have not discovered yet. I believe the problem is being overdiagnosed, and is not yet fully understood. It’s also important to understand: DCM (Dilative cardiomyopathy) occurs in degrees of severity. The degree of DCM suffered by a dog is what determines the fatality of it. There are a lot of dogs walking around with DCM that we wouldn’t even look at, until now.

Can My Dog Food Cause DCM? Cardiomyopathy?