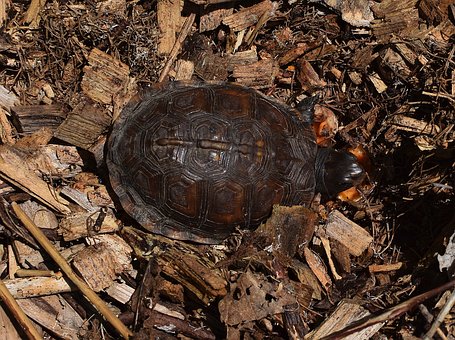 Eastern Box Turtles caught in Georgia are not “okay” to keep as pets in Georgia.

Basics of their needs and sexual dimorphism:  Needs to be within a couple thousand yards of drinking water and humidity. Male has red eyes, female, has orange or brown.

Legal (however) to harvest by the thousands and sell out of state and overseas:
http://market.kingsnake.com/index.php?cat=129
If you find one that’s been damaged on the road: I can treat and release at no cost.
Roaming ‘home’ after capture is a popular misbelief. It’s true that (especially) male box turtles have a “territory” and they will patrol their enclosure for a while after capture to “see” about an escape route –  but they will not cross the country to get back to their birthplace.

They make marvelous pets, eat very well on common low protein dog food (low protein is the key or feed Mazuri Box Turtle Food (hello Amazon!)
I would feel guilty keeping a *country* wild-caught Box Turtle as a pet because in the middle of nowhere and away from mowers, those have half a chance.
The majority of ‘yard box turtles’ however; end up dog-gnawed, mowed in the lawn, starved for lack of slugs worms berries and mushrooms, or hit in the road.

Turtles have been my ‘jam’ since I was 7 years old, which was a very long time ago. We had more Box Turtles in Marietta in 1975 – they would have 5 crawling around on Old Canton road after any rain. I know enough about turtles to have captive bred a threatened species. Geochelone denticulata