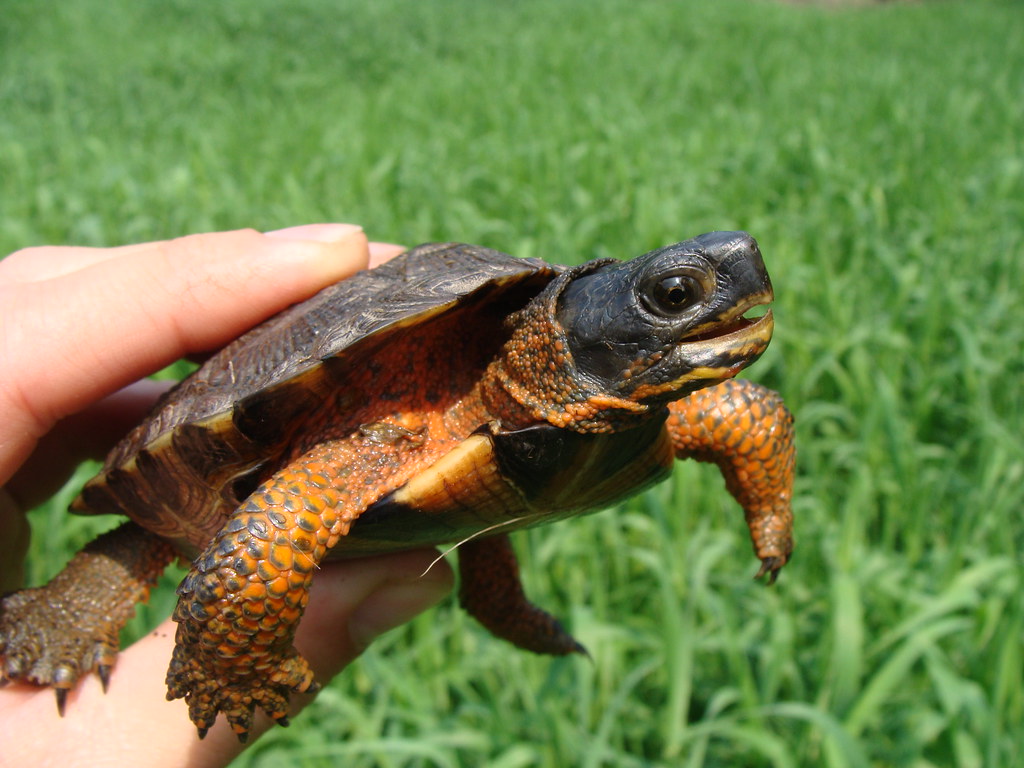 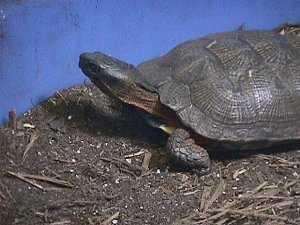 What I like best about Wood Turtles is their intelligence. They’re pretty unafraid of people and I like that their eyes will move in their sockets, but they also turn their heads to “regard” things. They’re active and easy eaters. Pretty colors, too.

Introduction: Next to the Box Turtles(Terrapene) and the tortoises (Gopherus), this is the most terrestrial North American turtle. It can be found in most habitats within its range. They have been observed in deciduous woods, woodland bogs, and marshy fields (in Pennsylvania, Maryland, Virginia, and New York)

Worth as a Pet: The Wood Turtle is perhaps the best turtle pet one could obtain. You should be cautious about obtaining adult specimens as many of these are wild-caught, and while they make fine pets, they are endangered over most of their range. Soon, they may only exist in captive bred populations. The Wood is a bright, intelligent and curious turtle which can solve problems and shows amazing agility. 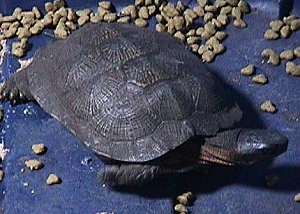 Morphology: This medium sized turtle (to 10″) has a sculptured carapace which is broad, relatively flat, and deeply ringed. Each scute supports an irregular pyramid formed by a series of concentric growth rings and grooves. The carapace is gray to brown in color. The yellow plastron has a pattern of oblong dark blotches on each scute. The blackish head is largest of the Clemmys, but is still rather moderate in size. It has a nonprojecting snout and a notched upper jaw. Other skin is dark brown, usually having orange or red pigment on the neck and forelegs. It also has a rather long tail. The male has a long, thick tail, with the vent posterior to the carapacial rim; a concave plastron with a deep end notch; and prominent scales on the anterior surface of the forelimbs.

Feeding and Behavior: After spring downpours, it is often seen searching for worms in freshly plowed fields. it also likes slugs, insects, tadpoles, and wild fruits. Housing: They are as at home in water as they are on land. One specimen I have been aware of is reared in a completely aquatic environment with nothing but a log for landfall and basking. Landfall and basking in full spectrum sunlight is very important. Others are maintained in apartments and live only on the carpet. Still others, probably the happiest in captivity’ have a large leaf-litter peat/sphagnum moss landfall [pen] and an equally large, properly filtrated body of water to swim in. Lifespan: One lived 58 years in captivity. 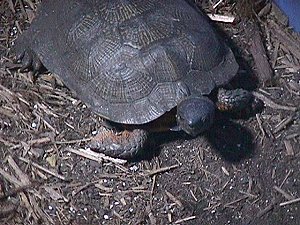 Notes: An excellent climber, it can climb 6-foot (1.8 m) chain-link fences. The Wood Turtle was once taken for food and now suffers from over-collection and habitiat loss. It is currently protected in most states. They are easy to breed in captivity and the CB after getting started are worth no less than $400 each.