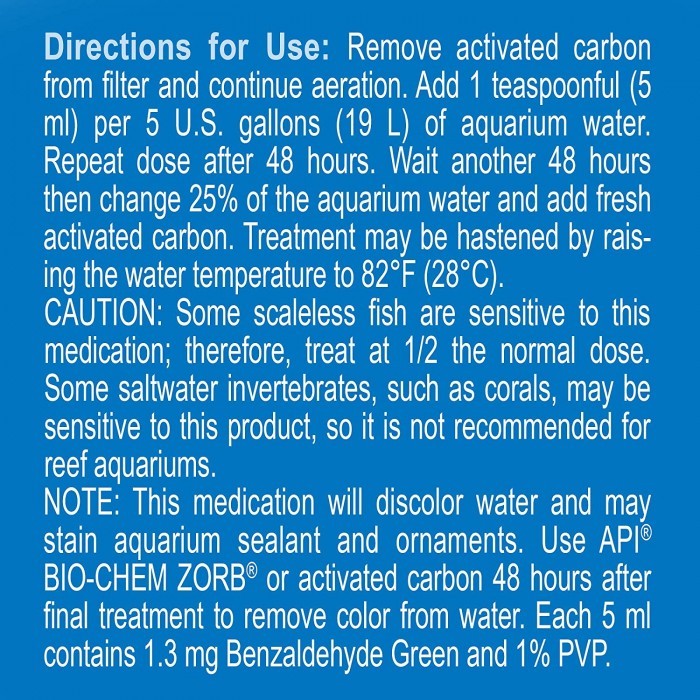 API is a little bit vague about their API Super Ick Cure product, and rightfully so.

The FDA is very concerned about copper-containing Malachite Green ending up in the tissues of food fish. And they’ve set about stamping out Malachite Green in as many products as they can.

API labels their Super Ick Cure product as “benzaldehyde green” which puts its “Malachite green” identity under the radar, at least for now.

So when you see any of the above, you’re looking at Malachite Green. And that’s FINE. (Reference)

What else is in Super Ick Cure?

Well there’s PVP – which is the active ingredient in Stress Coat, it’s a biofilm that protects and coats the epidermis. I am sure they’ve doped it out to allow the Malachite Green to stain the epidermis chemically and make it toxic to the Ich Swarmers, but ALSO perhaps to coat the skin physically and make it harder for the swarmers to re-encyst en masse. Don’t know. Don’t care. It works.

There are many other references to the presence of Methylene Blue and a Furan antibiotic in the medicine. They’re NOT on the label. I doubt that these compounds are in the Super Ick Cure, and if they are, API is commiting a crime putting those things in the bottle but NOT on the label. And I SERIOUSLY doubt API would stoop to that.

So, essentially, Super Ick Cure’s just Malachite Green without saying so but there’s a clever twist in play.

The thing is, you have to get a high enough amount of Super Ick Cure into the water to STAIN the fishes’ epidermal cell layer WITHOUT killing everything.

And when I say ‘killing everything’ I mean snails and shrimp. I’ve seen vendors saying that Super Ick Cure won’t kill shrimp and harms snails.

If done right, it SHOULD kill snails. and if it doesn’t then HOPEFULLY you’ve done enough to kill Ich without somehow killing off your Trapdoors. Formalin Malachite Green will kill almost all your snails. Not all of them.

I HONESTLY would NOT believe ANY vendor who swore it wouldn’t kill shrimp until you (or someone you trust) has tested it on shrimp. And I haven’t.

Why does the Super Ick Cure manufacturer make such a big deal about the temperature?

Ich moves through its lifecycle MUCH faster when living in warm water. When the organisms are encysted in the skin and in the packet on the bottom of the tank, it’s VERY hard for anything to kill them. Malachite Green has its best chance of killing the Ich when it:

At higher temperatures, the Ich will pop off the fish and drop to the bottom, multiply and swarm FASTER and therefore CLEAR FASTER. And since the Malachite Green is in the tissues for a limited time, manufacturers and researchers had to synchronize the life cycle to the amount of time they could keep the fish stained.

When you buy Super Ick Cure with this link, I get 0.02 cents towards my retirement fund. LOL

What’s in Ick Guard by Tetra?

So it’s got a little more power against a wider range of ciliates. Tetra’s Ick Guard (Buy) should have some impact on Lymphocystis virus megalocytes as well.