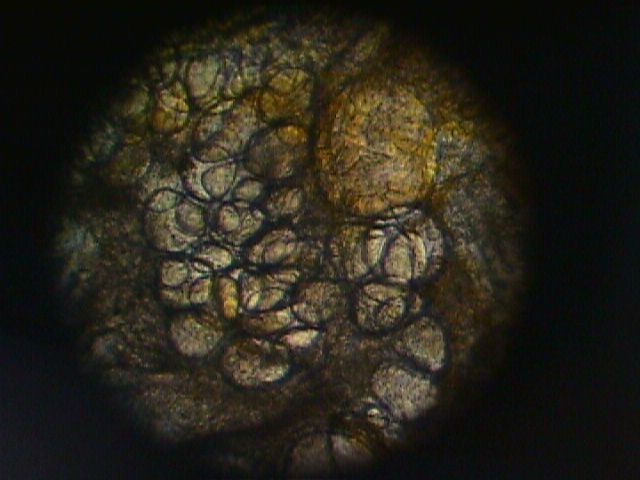 Of all the viruses affecting Koi, the fifth most common is LYMPHOCYSTIS. This is a viral pathogen that is poorly transmissible between your specimens. It strikes fish when some damage has occurred to mouth or fin, and sometimes on the body* (Almost exactly like Carp Pox). The lesions are warty, and rough (Carp Pox are smooth and shiny). They may be singular or numerous. I see this viral infection in fish in immaculate waters, and so I cannot verify that this is a stress related disease. I do know that it is merely disfiguring, not fatal. Lesions may be scraped off, but this could open the skin or fin to bacterial invasion. The only lesions that should be addressed surgically are mouth lesions that interfere with eating. Often, the lesions clear spontaneously, usually, but not always, the SECOND summer after infection, at the peak of the heat.
Curing Lymphocystis
Lymphocystis is a viral disorder which infects cells and causes them to become huge (megaloblastic). Above, a Scatophagus argus (brackish water fish) with Lymphocystis lesions.

It’s important to be *sure* the lesions are Lympho, seen under magnification above.

We tested Neutral Acriflavine according to book doses (theres a chart in there) and found it safe.
Aquarium Products “Lymphocystis Cure” is Neutral Acriflavine. I originally said it does not work, but I did not wait long enough. The studies have been reproduced three times and the Acriflavine was tested on five groups of fish twice. This is insufficient to declare “significant”. However, results have been initially exciting.

Treating in a well aerated hospital vat – Bathe the fish 3-5 hours in a bath made of pond or tank water according to label instructions (Aquarium Products Lymphocystis Cure) and replace the fish in its main tank. Re-bathe again in five days when you will already be seeing a reduction in lesion mass. Regrowth has not been seen after complete clearance.
Key: Must be confirmed Lymphocystis (will not work on other granulomata or cancers.)
As Surface Bactericide
Acriflavine (Neutral) (Click if Still Available)
Dose
Kills Surface Bacteria
CAUTION: Kills plants in treated systems, so use as bath.
Daily as needed