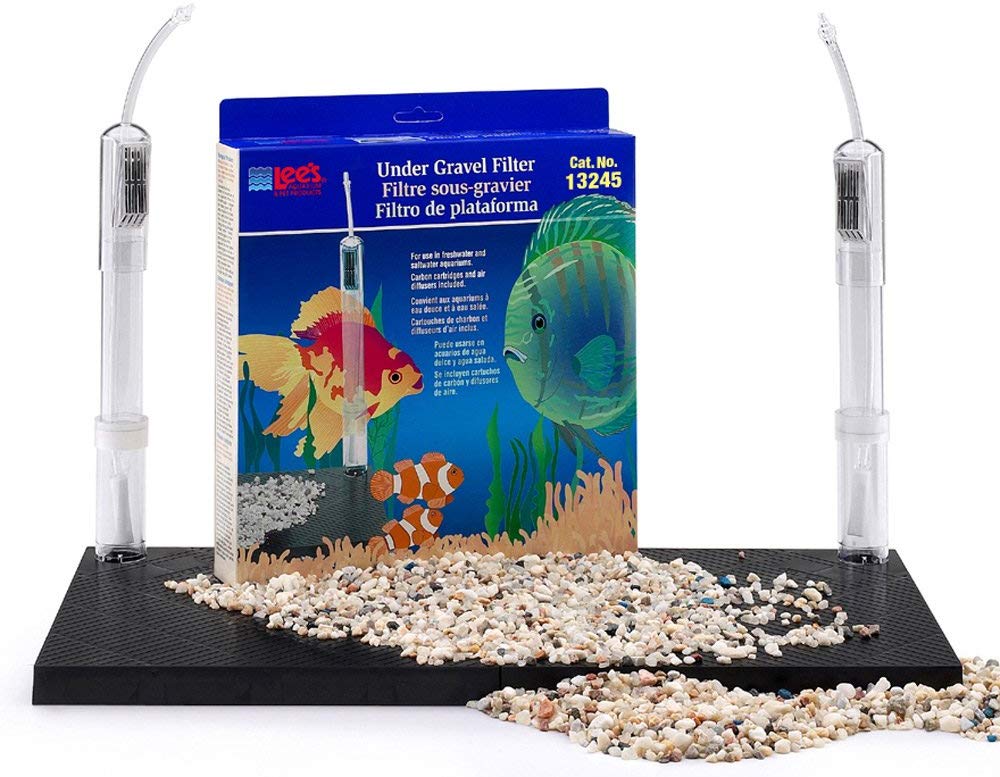 Undergravel filtration directly impacts the health of fish in many important ways. Unfortunately, in the interest of selling bigger, more complex filtration systems, several myths and misconceptions are being propagated to drive the consumer away from this excellent mode of filtration.

First, to understand exactly what we’re talking about, let’s describe and define some terms that relate to undergravel filtration.

Biological filtration is attended by two types of bacteria, which live on all surfaces in the system. The more surface area there is for the bacteria to live on, the more bacteria there will be. Functional nitrifying bacteria do NOT live free-swimming in the water. One way to increase the surface area in a system is to use gravel, over which the nitrifying bacteria can spread. There are other ways, such as in a filter. One type of hang-on Power filter has a large corrugated drum which provides alot of surface area for bacteria.

As the first type of bacteria (Nitrosomonas) exist on the gravel , glass, and ornaments in a system, they absorb ammonia and convert it to Nitrite. Then a cousin, Nitrobacter, absorbs the Nitrite and converts it to Nitrate which is then used by plants and algae for growth. YOU CAN BIOSEED AN UNDERGRAVEL SYSTEM (click)

All these bacteria need is a steady flow of oxygenated water and something nice to attach to.

To describe the under-gravel concept, picture an empty aquarium. Inside the aquarium we put a plate that allows water to flow through it, but not gravel. On top of this, we put a few inches of gravel. Up through the gravel at the back of the plate are “lift-tubes” which lift water up the tube and out into circulation. As water is pulled up the tubes, it is also pulled under the plate, through all that gravel. This is how we provide bacteria living on that gravel with a steady flow of oxygenated water.

Let me get a little more specific.

One common myth about undergravel filters is that they cause the formation of anaerobic pockets. In these pockets, very little oxygen is present, and nasty, an-aerobic bacteria grow which produce noxious gases which can kill your fish. Hence, the comment you might hear: “Undergravel filters grow bad bacteria that produce Hydrogen Sulfide.”

This is an ignorant comment. If neglected, it is true that undergravel filter beds can become clogged with particulate debris, and they can grow bad bacteria, but that is only in the case where the system’s owner is not performing simple, routine maintenance to counter the accumulation of detritus in the filter bed.

This maintenance is as simple as cleaning the gravel with a siphon hose. There is a commercial type that runs off the sink nearest your tank, and makes partial water changes and gravel cleanings a snap. It has always amazed me to see a man talking down the undergravel in order to sell a more expensive hang-on type filter. If he sells the undergravel, he may make additional sales in terms of siphon hoses, etc. These siphon hoses are of great import regardless of what filter type you finally decide on.

The point, however, is that Undergravel plates are utterly benign if they are kept free flowing, and clean. This maintenance is a bi-weekly thing. Twice per month you just hook up the hose attachment and siphon clean the gravel. 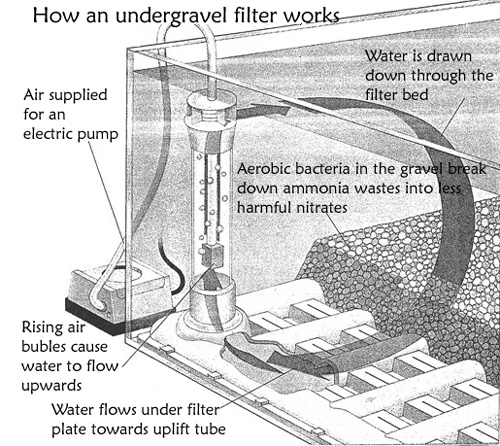 Another myth is that plants will not do well on an Undergravel filter plate. This is just so much bunk. This myth was first perpetrated on me in 1974 when I was starting out. I was only interested in plastic plants, to start out, so it did not matter. Later, as I developed, I wanted some live plants to add a dynamic effect to the tank. I put some Anubias in the tanks, and they did great. These plants were not in media, they were rooted in the gravel, right on the plate. I added some Cryptocoryne. They flourished. I added a mess of Aponegeton Bulbs, right in the gravel. All grow like some sort of weed. I won’t discount the possibility that there are certain sensitive types that will not grow on the plate, but I have yet to meet one. My opinion is that this rumor was propagated back in the early days of fluorescent lighting. People made the assumption that the plants dies due to the Undergravel plate. With new advances in higher LUX, fuller spectrum lighting, I think it’s feasible for even the most un-initiated beginner to become a green thumb.

Finally, let’s consider the benefits of the Undergravel filter.

First, it’s very inexpensive. Even the most basic, “economy” cut plate, which is a simple design indeed, works fabulously.

Thirdly, and most importantly for fish health, the properly maintained Undergravel keeps water moving through the gravel. This avoids the production of hazardous gases such as Hydrogen Sulfide and Methane. Also, the flow of water through the gravel decreases the over proliferation of bacteria adjacent to the larger particles trapped in the gravel.

Fourthly, this filtration system constantly returns all the lower strata of water to the surface by way of its lift tubes, which partially oxygenates it. It prevents low dissolved oxygen conditions from developing at the gravel level, where the bottom feeding scavengers and such need it the most.

Let me make this clinically relevant with a common case scenario.

A person has been running a canister filter and a hang-on power filter for months. All has been well since the break in period (establishment of the bacterial cycle). However, over time, they find themselves fighting more and more bacterial and fungal conditions on their fish. The fish in general are slow moving, lackluster. The scavengers (especially Cory catfish) die off. They replace them, and these die off as well, usually within two weeks.

Upon consultation, they have a two-inch gravel bed with no water flow through. Someone told them that an-aerobes grow on Undergravel filter plates. Then I have the unfortunate duty of informing this fellow that an-aerobes grow even better in static (NO water flow) gravel beds just like his.
I finally persuade the fellow to tear down his system and install an undergravel filter plate with a couple of powerheads to run it. He does, and he notices that there is black debris, like burned gravel under the rocks and such in his tank as he tears it down. He notices tiny bubbles of gas in this gravel. This is Hydrogen Sulfide. In small amounts it can stress and kill fish, those that do not die are more susceptible to infections. He says it smells faintly like methane or rotten eggs. He removes the gravel, places the plate in the tank, replaces the same gravel, and fires up the power heads. Within days, he’s calling me back to tell me everybody’s acting like new fish, swimming up and down the glass, and eating like they’re starving. Well, I am sure they do feel like new fish. The bottom dwellers have a greater turnover of their water, the vigorous pumping of water up the lift tubes is circulating and oxygenating the water, and the currents add interest to their little lives.

Nitrifying bacteria take up residence in the gravel and begin to effectively reduce the fish wastes that accumulate there, and the overall health of the system is dramatically enhanced.

He logs on e-Mails me the next week. “Doc, do I really need these hang-ons and canisters?”
I answer, “Son, if you come to my house, you’re going to see three of the nicest live-plant-community tanks in existence, and there isn’t anything on a one of them, except a heater and an undergravel filter plate with powerheads. No carbon, no floss, no wheels, no bells, no whistles, and no canisters. But that’s a matter of personal opinion, personal experience, and what works for me. You’ll have to decide for yourself.”