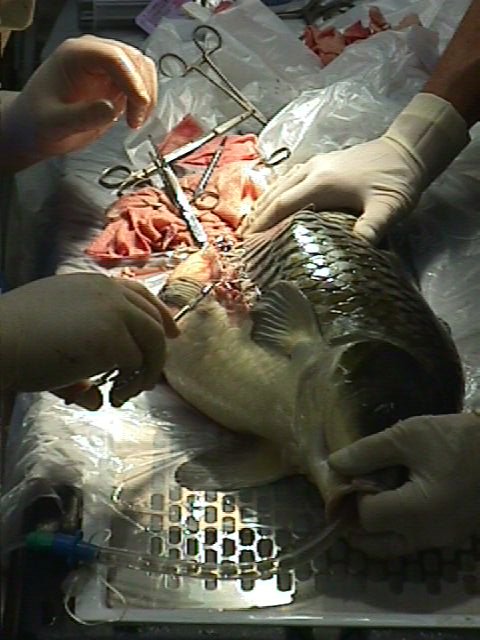 During the natural expansion of veterinary medicine into the world of Koi – it was inevitable that sooner or later a fish would require surgical intervention. When called upon to do this in the mid nineties, the road was not paved with much information for me, and we lost a fair number of fish just developing safe and useful anesthesia. After we had the fish living through anesthesia, we had to work out all the issues of surgery. So it’s been a long road.

The most common cause for surgery on fish is the repair of damage or infection to the mouth, enucleation, removal of tumors on the skin, suturing wounds, and exploration of the abdomen. If you think about it, there’s lots of things that might require surgical intervention when it comes to fish. It can make a big difference to quality of life, and even to survival.

Why (under what circumstances) do people do this for their fish?
Not many people even have surgery for their fish. Koi *can be* expensive but that does not mean they all are. And not all people are as attached to fish as they might be to a dog or cat. More importantly than economic or sentimental “value” – folks frankly doubt that there’s anything that can be done – so opportunities are missed. I used to perform surgeries on fish in the Atlanta area at no cost to the owners. So economics were largely removed from the equation. Still, surgeries are comparatively rare because people are reluctant to actually go to the trouble.

The problem with fish surgeries was that people would bring fish for surgery by the time they “had nothing to lose” and the fish had used up every bit of reserve strength and the tumors and problems were VERY advanced.

If a fish is injured, or has an abdominal swelling which might be a surgical target either for its diagnosis or removal, the owner would make contact with the office in Marietta and arrange to ship the fish or carry the fish to my office.

Do all vets do fish surgeries?
Not all vets practice fish medicine. Exactly the same way I don’t practice on horses or birds, so some veterinarians do not work on fish. It has to do with expertise and passion. Fish are important to me as pets and I “like” them. Other vets prefer horses in a similar way. This defines our training and our allocation of time. There is a growing list of veterinarians who practice fish medicine.

Do I have to ship my fish to you for the surgery?
Sometimes you can find a veterinarian who will perform fish surgery. Of these, a growing proportion will be able to provide you with surgical services. There is a diagnostic process to determine if surgery is even indicated for your fish. Past that, you can find help locally if you’re lucky.

And if I do have to ship a fish, how do I package and ship them so they survive?

The highlights of shipping are as follows.
First, never ship the fish until or unless you’ve actually spoken to someone on the receiving-end to make sure that they’re in town, ready to have the fish in the clinic, and ready to do the surgery. It’s also important that you ship the fish in a large plastic bag with about 30% water (enough to cover the fish) and 70% oxygen. The oxygen needs to be pure, 100% oxygen from a tank, not room-air. Fish will NOT get here alive packed under room air. I promise. And the air should take up more space in the bag than the fish or the water. But there should be enough water to cover the fish.

Finally, make sure the bag is not “taut” with oxygen – the bag should be “mushy” because when the airplane cabin pressurizes in flight, the bag will expand and become taut – and if you’ve packed it tight with oxygen, it will pop – and the fish will be lost. Make sure to close the bag with TWO rubberbands and then overbag it in another plastic bag with TWO rubberbands. Those are the highlights. The website talks about the shipping type, time of day to drop the fish off, and how to talk to Fedex to get what you want! <grin>

Are the fish underwater during surgery?
That’s a good question – at first they are underwater. We have the fish in a holding vat with room-temperature water, well-aerated. The anesthetic we use is mixed well, and then put into the tank with the fish. When the fish falls asleep, we then use a pump to push water over the gills – we re-use the water with the anesthetic in it over and over for the fish we’re trying to keep asleep. After the procedure of course, we throw that water out. The fish is then replaced in clean, pond water.

What kind of anesthesia medication is used?
There are two kinds of anesthesia we use. The best one seems to be Oil of Cloves, because it’s easy to get, and it brings the fish down and back up again rather slowly, allowing more careful monitoring. Fewer accidents occur when the fish is moving through its anesthetic planes slowly. You should emulsify the oil of cloves in a small jar of water – shaking it violently to mix it, then put it in th e tank with the fish you want asleep.
The second anesthetic is MS-222 also known as Finquel. It works very well. But it’s harder to get – and you need to buffer the water in which the fish is sleeping with Baking Soda. When you determine the amount of Finquel you need, you must use THREE TIMES that much Baking Soda in the same water to sustain the pH while the fish sleeps.

Is there a recovery, post op sort of thing similar to a human surgery?

After surgery, the fish is returned to clean clear water, usually the tank it was in before surgery. If Oil of Cloves was used for the anesthetic, we might expect the fish to require about ten minutes to wake up, but that’s actually dependent on three things. How strong the fish was, what temperature the fish is, (colder takes longer to wake up) and finally, how long the procedure was. (Longer time “out” requires more time for waking up!)
After surgery, since we’ve opened the skin, infections are common. Think about it. We can’t really “bandage” the wound, and your doctor would FORBID you to swim after surgery because water can’t be sterile. So bacteria are always getting into surgical wounds so antibiotic therapy becomes very important after surgery. This is usually provided via injection.

How long do they stay at the vet after the surgery?
We’ve had most of our fish go home the same day for minor procedures because the owner usually has dedicated space for the fish post operatively. Also, it’s a fact that the owner will monitor more closely than we ever could – after all, the owner can be there all night, all day if need be! In any event, we encourage the owner to continue antibiotic therapy at home, and do whatever is necessary to get a surgical patient eating again! That is VERY important to surgical success.

Do they get stitches? Do they come back to the vet for a followup checkup after surgery?

We have found that stitches in the skin are VERY irritating and the faster you can get them OUT but STILL have the fish “closed up” the better they do.
And we have found that you should NOT REMOVE ANY stitches if the line gaps at all when you’re considering the removal of any stitch.