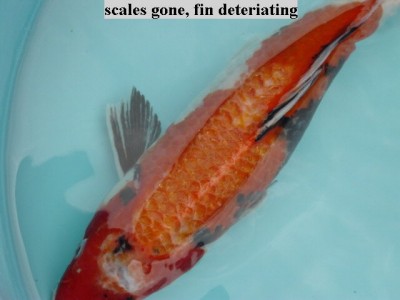 What if two smart people got together to clarify some points of public concern regarding Koi Herpes Virus? Well that’s what happened and we got a lot of information out there. Of course new information emerges all the time but here is what we knew back then. It’s an interesting read.

Key to Initials:
DRC: Dr. Roddy Conrad
ELJ: Erik L Johnson
DRC: First question. Several folks have reported the virus becoming active at about 65 degrees F.
ELJ: Correct. Verified by Moshe Kotler at essentially 18 degrees Celsius.
DRC: So is the KHV virus active in the 65 to 83 degrees F temperature range?
ELJ: Exactly. In a way that’s very much like a “on and off” switch. Not active below, nor able to live above the range. An oddity of this virus. If the fish have the virus in their tissues and enter that range of temperatures they break with the virus and the disease.
DRC: Second question. To save a collection when KHV is known or suspected, Erik recommends heating the water and koi quickly to over 85F. Perhaps one pond in a million has the heater capacity to do that!
ELJ: Exactly, which is why the Israelis are “keen” to develop some sort of vaccine. In most food carp and other endeavors, rapid, large scale heating is not an option.
DRC: Can someone suggest a practical method to have on hand for this purpose?
ELJ: Look at it practically; my opinion has always been that Koi do better heated over winter. Therefore, perhaps a hobbyist could justify the effort of developing a physical-plant capable of heating their pond as a twofold benefit: Winter heat, and secondly, the ability to “heat-out” a viral pathogen if encountered.
DRC: I assume a bunch of high wattage submersible heaters in a koi show tank inside the house would be the only real option if fish are dying from KHV and you want it stopped?
ELJ: Usually, and most quickly, yes. If you look in various “aquaculture” magazines, you will find cost effective titanium heaters that work well. “Clepco”, might start your search, it’s a company with titanium drop ins at a reasonable price. These wouldn’t be cost effective for long term or overwinter heating of the pond, but in a show tank, for a week they work well.
DRC: The practical aspects of this recommended treatment, meaning how to do it “in time to save the fish” would be useful to many of us. Some of us might even put up such a facility “just in case”, especially those who take fish to shows may want to put returning fish in a tank and heat them to 85-90F for a few days or weeks as a preventative treatment.