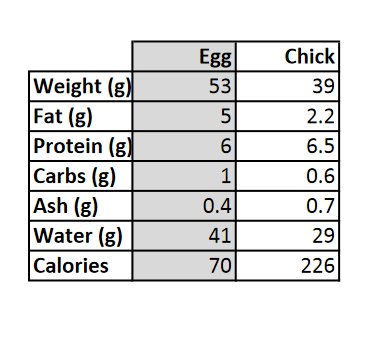 Which has more calories? The egg? Or the Chick?

So, think about it. The egg contains all the calories it’s going to have, right? I mean, it never eats so the calories should DECLINE as the chick uses them up. Right?

How could an egg have MORE or LESS nutrient value than the chick? Nothing goes into the egg. So the nutrition of the egg should be the same as the nutrition as the chick.

An egg is about 53 grams. And here’s it’s nutritional composition: 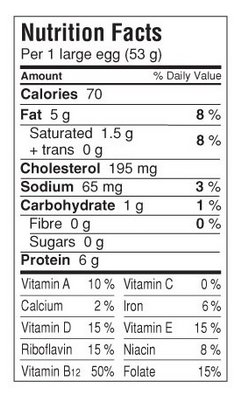 And then here’s the nutritional analysis of a day old chick. The analysis is a percentage, PER DRY GRAM of chick. So you have to conclude that a chick is 75% water. And then calculate the  nutritional grams between the hatching weight and the grams of water in the little thing. This analysis calculates the percentage of ash, which was nice.

Here’s the ash content of a chicken egg:  I had to correct for my 59 gram egg and the 63 gram egg.

Well, for purposes of this case, I used these typical hatching-weights of some average chicks. The parents were just plain chickens. Not bantams and not Rhode Island Reds or something big. So it looks like the average hatching weight could be 39g?

The key element is the massive use of the fat in the egg. THAT is where the energy came from to grow the embryo into a chick.

And we know that chicks “breathe” oxygen. So, the embryo, (chick) must be able to USE fat to synthesis energy needed to drive the metabolism and protein synthesis in the egg. It’s not really converting FAT into PROTEIN.

It’s fat being USED, and protein being synthesized from the abundant amino acids in the egg. You know what’s amazing to me? That every egg that comes out of a chicken SOMEHOW has exactly the right amounts of amino acids to make all the proteins the chick needs from muscle to nerves. Think about it further. A brain is nothing but a stroma (framework) made of pure fat and supporting a cloud of neurons. So the chicken put enough fat in each egg to fund the metabolism of the amino acids AND to make a little chick-brain.