It’s hard to have enough artificial lighting to grow healthy algae and plants.
Without this, you can suffer an accumulation of nitrate.
In studies, high nitrate levels aren’t toxic on an acute level. Chronically, your fish will always do crappy in high nitrates. Studies on reptiles show an effect on thrift and fecundity so severe that reproduction is impaired and sometimes; prevented. High nitrate levels correlate well (and in direct proportion to) background pollution. Controlling nitrates controls background pollution.

This is a pan shot of the indoor pond, It was 2800 gallons in the basement of our Marietta house. It’s sixteen feet long and eight feet wide.
The fish really loved being warm all winter, but the nitrates were unreasonably high. Note the AquaDyne in the foreground. This was before they had blowers on them. That filter was completely awesome.

The overflow system I worked out: I just opened my AquaDyne sludge drain a little, allowing a small amount of water to be exiting the pond at all times. The ball valve you see in the picture replaces water all the time. I was turning over half the pond each week and still had nitrate troubles. I am a pathological overfeeder.

Here are some of the fish I had at the time. By Spring, quite a number of these fish were dead due to nitrate problems which I had underestimated. Correction of the Nitrate troubles, especially via the flow through system described above, solved and stopped most of my losses.

By concentrating light intensely on them, I was able to support some plants. However, there was no way to propagate sufficient plant growth to reduce my nitrates alone. 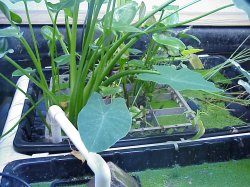 Even the prolific Duck weed was insufficient to minimize the Nitrate problems. I grew it as fast as I could, and would dip a few cups of the stuff out to feed the fish every day. Still, nitrate levels were unreasonably and unsafely high. I recommend you keep your levels under 120ppm for best results. Under 60ppm would be considered close to perfect.

This is a big problem in crowded systems but trickle water replacement, I figured out AFTER the above issue was done. 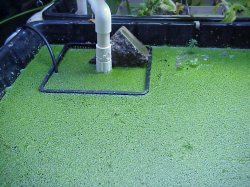