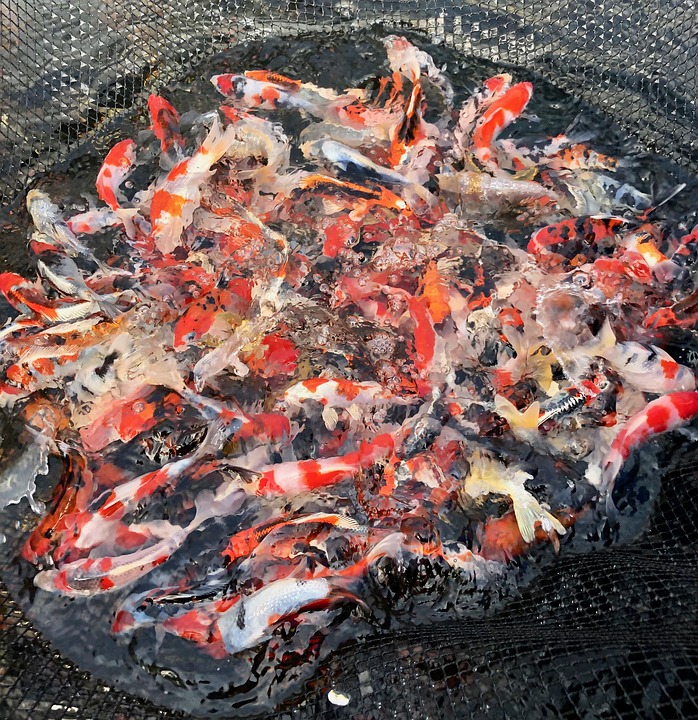 This article pertains MOSTLY to koi and pond fish. But most of the recommendations hold for goldfish and tropicals as well. How To Buy Healthy Fish And Avoid Sick Ones

First, you should look for active, interested fish. The water in the holding tank should be rolling around and the water’s surface should be active. This is optimal for gas exchange and results in healthier livestock. The fish should be cruising below the water’s surface and chasing each other around. Don’t buy fish which are lethargically hovering in the water.

The fish should have a torpedo shaped body and by all means the fish should be “fat-looking”. Maybe you don’t know what “fat-looking” means. This means the abdomen or midsection should be as wide as the head. There should be a smooth contour from the head through the gills and into the body. If the belly of the fish is “pinched” you should not buy the fish. Lame excuses like: “They have been fasted and haven’t resumed eating yet” may be offered as an explanation. The smarter move should be to ask that the retailer should give you a call when the fish are eating again, and ready for sale.

The fish should eat when fed. If they don’t eat, don’t buy them. If the retailer offers the lame excuse that they were just fed, plan a return trip later to see if their appetite has returned. In case you didn’t know, healthy Koi in good water will always eat until they look a little bit like a fat ol’ tadpole.

Any disease or disorder you might note with one fish will also be carried by all the others in the group.

Look at the fish you want to buy for signs of “too much” slime occurring in patches on the body, or damage to the fins which would cause them to look like they were eaten away. Of great importance is also to notice the fishes’ nose, which should NOT have a red mark on it. It commonly occurs in retail tanks that the fish will “snub” their noses on the sides of the tanks. Unless you want a “project” with the strong potential for failure you should not buy infected fish such as those described in this paragraph. Again, you can tell the retailer in good faith that you are interested in a particular fish but you won’t assume the liability until the fish is “whole” again. I mean really, if the fish “is just fine” as so many retailers are quick to assure you, what’s the problem with waiting a few days for it’s lesions to disappear before closing the sale?

Any disease or disorder you might note with one fish will also be carried by all the others in the group. I made this mistake all the time when I was a kid. I’d see some gorgeous fish and fall completely in love with it. But there’d be this other fish in the tank with it that had a rotten mouth or a torn fin. So I’d rationalize that the fish I wanted to buy is “fine” and had no symptom. The problem is that the same pathogens, conditions and most importantly; the circumstances that caused the illness in the affected fish had also influenced the future health of the other more desirable fish in the system.

Finally, you should look for prospective new fish which have taut, erect fins. The dorsal fin (it’s the fin that sticks up out of the fishes’ back) should be tightly raised. The tail should be fully spread, not clamped down. Please don’t buy a fish which has clamped fins. These fish are incubators of parasitic and bacterial diseases.

*swimming actively more than 90% of the time.
*full bodied
*eating aggressively
*no wounds or sores on the fish or it’s mates.
*erect fins