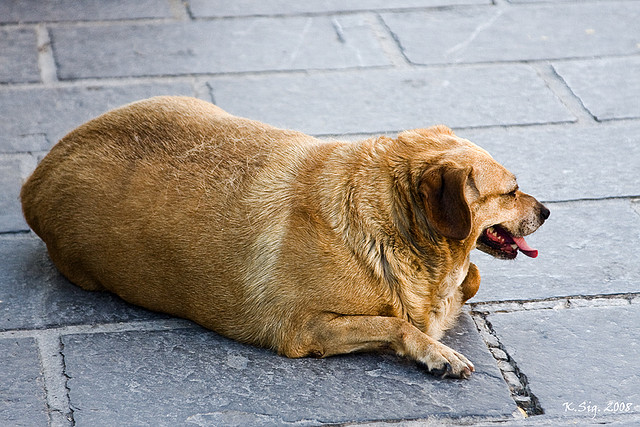 Getting Daisy To Eat

‘Daisy is so spoiled.’
‘I remember when she used to eat dry food, but then her appetite for that went down when she was about a year old. She was young muscular and fit at that time, so we were worried that if she didn’t eat enough, she’d get skinny.’

‘She just needed variety, we discovered.’

‘We added some chicken to her dry food and then she’d eat. That went ok for a year or two, but we noticed that even with chicken in the dry food, her desire for it was in decline. That was surprising because after we started putting chicken in her dry food, she started to plump up.
In fact, she’s gotten pretty thick for all our efforts to make her eat. The Vet said she was getting fat. But to us, she was not eating enough! Plus, she’s “just a big dog”.’

‘She was skipping a meal here and there, or leaving half her food, so eventually we started drizzling beef gravy and maple syrup on her food to get her to eat. She found a new interest in eating. It was obviously her boredom with chicken.’

‘It’s a strange trade off, though, getting her to eat versus what it’s doing to her body: Her legs and tail are disappearing into rolls of fat and she cries when she has to get up, or lay down. She walks with a limp, and her panting is annoying.’

‘Over time we’re finding that the bigger she gets the more picky she becomes. It’s almost as if something DE-creases the appetite of a dog when they’re overweight, because now the only way she’ll eat anything is if we bury a layer of bacon and cheese in a bowl of melted vanilla ice cream and crush graham crackers on top. She almost seems nauseated to look at it but we hold it up to her and she’ll eat it. But no dry food anymore. Totally bored with chicken and dry food.’

‘The vet says I need to get her weight down, and of course we *would*, but she turns down her Diet Food unless we mix bacon grease, sweetened condensed milk and melted butter with it. How could she possibly lose weight if she won’t even eat the diet food? The vet says she’ll eat before dying of starvation, but he doesn’t know my Daisy.’

‘Now she’s drinking tons of water and losing weight like crazy. I thought she was finally responding to the diet food, but the Vet says she’s turned diabetic’

I wish my Vet had tried harder (like at each annual check-up) to convince me that I needed to get Daisy’s weight down. I think it was the diet food he recommended, or just as likely; the Vet’s probably wrong. I am going to go get a second opinion.

‘Well. The second vet told me Daisy is diabetic and that I probably caused it by ‘getting her to eat’ even though she was overweight. I am so embarrassed to have caused this, I can’t face my regular vet who warned me for eight years. My conscience is more comfortable if I convince myself it’s his fault, and change vets.’

This is a true story.

The names were changed to protect the innocent. The ‘vanilla ice cream and maple syrup’ were actually pieces of cheese and Krystal hamburgers. The dog spent the first 8 years of its life almost tragically obese. When it went diabetic, I was criticized for not “catching it sooner*” (as if that cures diabetes) and they left the practice.

*It was diagnosed diabetic at an emergency clinic, very sick with diabetic ketoacidosis (DKA) and I’d just seen it three months earlier for its annual visit and didn’t suspect diabetes because it was perfectly healthy. Go figure. When they owner was told that he contributed to the diabetes with his feeding practices, and the dog’s lifetime of obesity, and needed to reign it in, he was humiliated and never came back to the practice. I honestly don’t blame him. I harped on him annually to get the weight down and all I got were excuses. He shaved years off that dogs life and landed it in ‘daily-injections-ville‘ and I don’t know whether my face would hide my disgust.