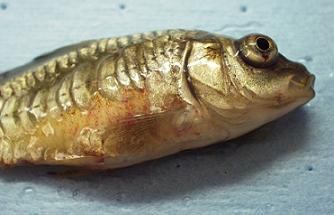 “Dropsy” is the condition in which the body is diffusely infected with bacteria and the scales generally stand out from the body. In some, rare cases, generalized scale-lifting is also caused by Costial infection (see parasites) but usually Dropsy is a terminal result of the bacteria attacking the KIDNEY of the fish. Many treatments have been tried with only a less-than-5% percent favorable outcome.

Dropsy, also known as Bloater or Pinecone disease, is usually caused by bacterial invasion of the fishes’ kidney.

There IS also a sporozooan parasite that can damage the Kidney this way, called Mitraspora cyprini, but I have yet to see this on a necropsy.

Dropsy is, for all intents and purposes, untreatable, based on 7 years experience, using the following drugs: Azactam, Baytril, Chloramphenicol, Gentamicin, and Amikacin. I have tried a Sulfa drug, brand name Albon, and that did not resolve the problem either.

Bacterial dropsy is usually caused by Aeromonas or Pseudomonas bacteria. By the time the fish “blows up” and the scales protrude form the body, the damage to the kidney is so profound that recovery is impossible. The reason the scales blow up is because the fish takes on water, unable to expel the water via the demolished kidney.

If you must try to save the fish, isolate the specimen, elevate temps while elevating oxygenation, and begin injecting antibiotics intraperitoneally. You could also feed the antibiotics in a medicated feed.
You read alot about people using Epsom Salts and Peas and a variety of other medications, even Erythromycin with  (supposedly) almost 100% success.

When pushed, they’re unable to present a SINGLE BIT of documentation on their regimen or dosing, and most notably, a SINGLE before-and-after photo. People overstate things. They’re not liars necessarily. But some are.

Dropsy is characterized by the raising of 100% of the scales on the body and BULGING EYES – without ALL scales being raised, and if the eyes don’t bulge, I have my doubts that true Dropsy is present.

The following picture is NOT Dropsy. Note, all scale laying down. This fish is more likely to be egg bound.

A Koi With Pinecone or Dropsy from a Small Pond?

This (see above) is a great, great case for us to get to look at. Many thanks to Lynne and her intentions. She is right to decry small facilities and crowding.

I agree that Koi should not be kept in small facilities, at least not for their intended lifespan – whether it causes overt disease, illness, or death is arguable, so have at it -> But whether it does or doesn’t, it’s like raising a Dane in the bathroom. They’re just too big to be truly comfortable.

Or, more simply, if they had a choice to swim around in the 300 gallon, or they could swim through a tube and be in 3000 gallons, where do you think they would be, day in and day out… ?

Louisiana State seems to have worked out the impact of crowding, and there seem to be three factors –

And each plays a different part. Their Tilapia work seems to show that when the fish are raised from Fry, under intense rearing conditions they know little else. The physical effects of simply bumping into the walls and each other are negatives that are hard to beat. And the main thing that stunted the growth of the fish was the rapid accumulation of background pollutions like high CO2, rapid depletion of trace elements, rapid accumulation of nitrogen, sagging pH and exhaustion of carbonates.

Constant replacement of water was key.

How close to this, does that 300 gallon pond she mentions, come?

I want you to go back and look at the images again please.

This is not Dropsy.

Please review the images and note the condition of the scales over the caudal part of the body, before the tail…And in the dorsal view, look at the cranial body, behind the head – > Again, NO scales are raised. 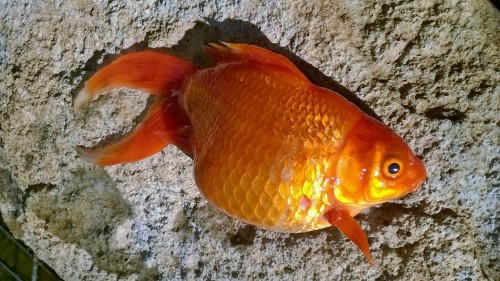 When there is a fluid balance problem, which is what Dropsy is (it’s in the book) -> ALL tissues become edematous and swollen and ALL scales rise.
Later, when people say “I save Dropsy fish all the time!” they’re referring to fish like the one in the picture, but there are extenuating circumstances….

1. Lynne would be hard-pressed to save such a fish because it is in tiny facilities.

I proposed the S.H.I.T. method of saving fish from bacterial methods earlier this month at the University….(Before you jump on me with both feet – it was the after-lunch crowd that is usually sleepy!! And I needed to jolt them up)

When you’re fish get a bacterial infection, and AFTER you’ve assessed the environment, give them S.H.I.T:

Fish need space to recover…..They will not recover while they are crowded or if conditions of crowding are not reversed. So give them space.

When the medicine absolutely positively has to be there overnight – Injections.

Surface wounds do better and heal faster with it.

2. This fish was on “round two or three” with this.

If it were it’s first time, results could be better in fending off the infection – because the fish is in a strong posture and has not had infection before. After each successive infection, the bacteria, and its damage become more and more indelible in the body.

3. If the scales had been raised all OVER the body, from the head to the base of the tail, Dropsy, and water balance issues would have been diagnosed.

This fish was not destined to survive this. What would have been awesome was a necropsy. If I had to bet, I would wager there was an inspissated egg case in there acting as a foreign body.

If the fish retained eggs and the ovaries became the focus for infection year after year, this would explain why Lyne’s treatments had been effective to a point…

I don’t (or didn’t get from the posts) that we had post mortem information from this case, so that’s only speculative.

What’s the primary cause of egg retention? Infection, lack of spawning circumstances, or too small facilities.