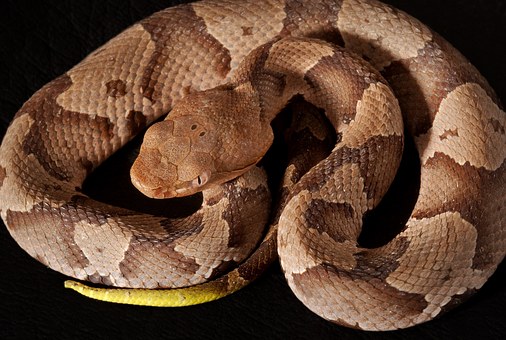 Copperheads live around people, with no problem because we attract the rodents that they love to eat so much. Their favorite is a mouse, perhaps a second favorite would be a chipmunk, and then a rat.

Since copperheads can live where it is dry or wet, even living in the water on a rare occasion, it stands to reason that where they live has everything to do with what they eat. If a copperhead has grown up eating frogs, it is going to end up living closer to the water, whereas most copperheads live near the house where mice and rats may drink.

If I needed to find a copperhead on your property, I would go where water seems to be dripping slowly over time, for example near the air conditioning condenser outside by the house. When a mouse comes to drink, the copperhead gets his dinner.

If I had to trap a copperhead, I would lay a piece of plywood on the ground in moist leaf litter somewhere within 50 yards of standing water, especially a creek. I would come back several months later and expect to find a copperhead curled up underneath that piece of plywood.

Herpetologists use big sheets of roofing tin in suitable environments to catch the various snakes that they are wanting to study.

To recap let me mention that copperheads go where the food is. And they tend to like it moist and humid. While it is true that they do not much like the water, and would avoid swimming if possible, they like the various food that lives near the water and depends on it, so the further you get away from water, the less likely it is that you will see a copperhead.

Their biology specifies that they should like to be very warm at all times, so you may find them laying on the road at the end of the day enjoying the heat and to the converse, one of the reasons that so many copperhead bites occur in the spring and the fall is because the copperheads may be lethargic in temperatures closer to 50 and 60 in which case they do not effectively evade their so-called predator, your dog If they’re not hidden by the time it cools off.

Invariably, a copperhead would rather stay out of the way and be undetected, then stand and fight.

I am including a picture of a copperhead so that you can recognize it.

Features that identify a copperhead include hourglass shaped markings on the back, a pleasing pink and orange color, usually, a broadhead that does not taper into the body, slit like pupils, and Copperheads will often have a yellow tail. The snake is usually very thick in the middle, if it is an adult.

What about copperheads living in the water? I have seen it asserted that copperheads are not water snakes but that is not universally true and it nearly got me bitten one time. It is true that 98% of the “copperheads” that you see living in the water are actually banded watersnake’s, also called northern watersnake’s. These may be quite orange in color and resemble a copperhead considerably, except their heads are typically narrow and their pupils are big and round.

One time, I was reaching for a so-called watersnake except I noticed it’s markings were distinctly hourglass shaped and the snake was far more coral colored and what I have been catching earlier. Before I put my hand on it I realized I was looking at a coil of an actual copperhead who I guess, was down at my creek catching a frog for breakfast.

The copperhead does have a few natural predators*, perhaps the largest of which is the king snake. That’s a large black snake with thin yellow bands, it really loves eating copperheads and can survive the bite of a copperhead with no problem somehow. It is not at all uncommon to find one snake completely engulfing another snake. And it is always the big black snake that is swallowing the orange and coral colored copperhead. Pretty cool, and a good argument to let those king snakes live around your house.

The eastern king snake is a Hunter of copperheads.

Besides laying a piece of plywood in a strategic location in order to gather up the specimens in your area, it is possible to trap copperheads, ( and every other kind of snake ) by making a 12 inch tall fence at the edge of your woods with bird netting. The snakes will try to push their way through a 1 inch mesh and when it hits the mid body it will trap them, and they will not be able to back out because their scales fold back in one direction. Sadly this will catch and kill most snakes.

Perhaps as a parent you will have to make a decision regarding this if you have three and six-year-olds wandering the yard who may be vulnerable to a snakebite. I would never set a fence trap like this at the expense of beneficial snakes because I personally do not still have small children without the sense to avoid them.

To close my discussion of copperheads in residential environments and as a liability to your pet, let me advise you that if you carry your dog or cat to the vet with a copperhead bite, please inquire as to the application of something called DMSO, which is a topical liniment that I have found very valuable and limiting the damage to the tissue as done by a copperhead bite. I, professionally, would never treat a copperhead bite without it. I am also a big fan of steroids in large doses to minimize the lytic damage to the tissues near the bite.

Secondary infections in the area of the bite are also common, especially bites to the face, bacteria seem to enjoy the necrosing tissue in the vicinity of the strike and so I believe that antibiotics are indicated in the case of most bites.