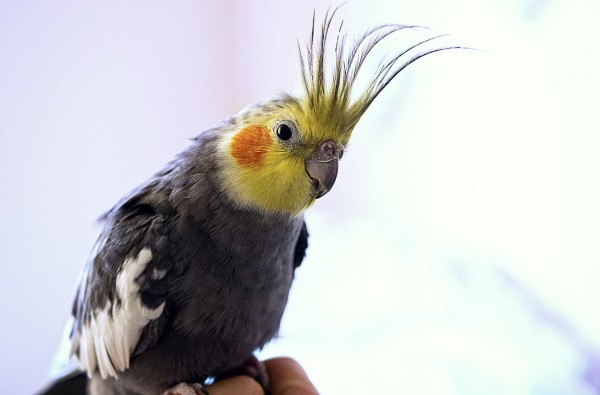 Cockatiels are becoming perhaps the most popular pet-bird in North America. Reasons for this include the fact that they out-live, and out-love the less intelligent and less affectionate Budgerigars and Canaries.

Cockatiels are native to Australia, and occur there in great numbers. Their natural color is a drab gray highlighted by orange cheeks in the male, and yellow plumage in the wings and crest. More recently, careful selection has resulted in more ornamental Cockatiels with all yellow (lutino) coloration, and another attractive type called the Pied which has yellow feathers interspersed in varying degrees with the normal gray ones. 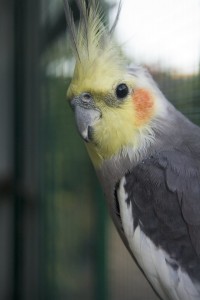 Cockatiels present no great challenge in their upkeep, they are easily hand tamed and require little space to be truly happy. There are, however, some important points to consider in their proper care for maximal life span and continued health.

First, they need a cage with sufficient room for “flying”. This means that they need to get at least a few wingbeats flying from perch to perch, either horizontally, or vertically, so long as they can exercise their pectoral (wing) muscles.

Another cage specification of note is the need for perches of varying sizes. It has been shown that the feet of the Cockatiels need to be challenged to grasp different sized perches or their feet can become “formed” to the standard perch, and thus become atrophied.

Secondly, Cockatiels need good nutritional support, and this means more than just seeds. If they can be persuaded to eat Monkey biscuit from the local pet shop, this would be the best way to ensure that they are taking enough protein and vitamins, which seeds are notoriously low in. Other nutritional support may be provided in the form of Cuttle bones, and fresh dark green, orange and yellow vegetables. Yams, Yellow Squash and Broccoli are all greedily accepted as a small part of the birds’ diet. Grapes and Kiwi fruit can also be regarded as a safe and popular treat.

If you are feeding seeds as the staple or main part of the diet, you should not allow “chaff” or seed shells to accumulate in the bowls. The Cockatiels will not dig for their food. And though the bowl may look very full, there is nothing in it but chaff. The solution is to take the bowl outside and blow off the chaff, leaving the heavier, viable seeds in the bowl.

Cockatiels should be covered at night. We cover ours with a light cloth in the summer, and a heavier Terry cloth in the winter. Particularly in the winter when chilling and drafts are more of a threat, it is important to move the cage away from windows.

Water should be provided to Cockatiels in the form of a water bottle. Only the types intended for bird use should be selected and used. These are dark green, to prevent algae and other harmful organisms from growing in the water bottle, and the tip of the water bottle is equipped with a red ball. The ball is attractive to birds and so they teach themselves to use the bottle. Then it is safe to remove the regular bowl. Still, it is nice in the summer to mist and bathe your Cockatiel. A regular plant mister can be used, or a bowl of tepid water can be placed in their cage for them to bathe in. This is not ideal for use in the winter when drafts are more likely to occur.

As far as cage ornamentation, I think mirrors for birds are unkind, even if inadvertently. You see, the male Cockatiels think the other bird is a rival, not a friend. Male birds will expend alot of energy and anxiety trying to out-show the other male, and then finally may injure themselves trying to “run him off”. Other toys in the cage may be of some utility, but not when they impede the birds ability to make short flights from perch to perch. I have seen cages so full of toys that they birds were almost lost in the maze.

Wires in the cages are to be avoided at all costs. They often result in lacerations and strangulations when, in time, the bird finally flies into the wire suspending the toy.

My Cockatiels enjoyed their “Busy-balls” which would lie on the cage bottom. They enjoyed pushing them around, and the cage remained un-cluttered.

Be sure to handle the bird you intend to keep before you buy it. A bird that appears aggressive in the store may carry this behavior home and be tough to tame.

I hope this brief topic on birds has helped you to understand some of these pet’s needs a little better.