Interesting information has shown up (a little ‘fringe-y) that suggests that altering (spay, neuter) pets robs them of sex-hormones (testosterone, estrogens) that maintain their vitality into later years. Without those hormones, and after they pass the age of 9+ years, the odds of contracting cancer can increase up to four times. (Specific cancer, specific age range, specific gender, but still…)

Another study suggests that intact dogs are more ‘confident’ and less prone to anxiety*. This work was done as a Masters-thesis paper at Hunter College which is a decent college in New York, but the students were pretty much just dry-labbing a ‘paper’. No dogs were met, no exams were done. No experience was brought to bear, or gained. So I don’t hold a TON of stock in that paper.  The statistical work was good, but they didn’t qualify what “Aggression” or “Anxiety” were, or how that was elicited. The paper was accepted but not professionally reviewed.

*The down side to ‘intact-ness’ is that there’s a flip-side anxiety and prevailing ‘distractedness’ about ‘finding a mate’ that drives owners crazy so it’s a “no win” situation, right?

Following up on the belief that spay and neuter may potentiate cancer in older altered dogs, I dug up almost-ten studies that DO SHOW that spay or neuter increases the odds of the dogs getting cancer.

Other studies confound this. A study done in Michigan at a Veterinary College. (The influence of castration on the development of prostatic carcinoma in the dog. 43 cases (1978-1985). Obradovich J1, Walshaw R, Goullaud E.)

No study showed that de-sexing CAUSES cancer in any form –  but, (perhaps by weakening part of the immune system) some dogs (legitimately) were up to 4x more likely to get certain kinds of cancer than intact ones. (Spayed females and Hemangiosarcoma, for example)

Taking it “to the next level” I skimmed the abstracts and conclusions of about a hundred papers. While the statistics don’t speak to a national emergency or even a ‘prevalent’ problem, the papers are incontrovertible that even if you wanted to discount the research from one paper, you can’t discredit all of the data.

So, in some cases the results could be tabulated in “how you look at it.” and it depends on what you’re trying to convince people of.

HOWEVER, (and this is a BIG HOWEVER) the @ ten studies that DID relate to spay, neuter and cancer, and ACTUALLY showed increased risk of cancer in the de-sexed dogs!!

So what I’m saying is, that Snowflake Vets incriminating de-sexing surgery for cancer in later life, have a valid point.

But here’s the thing: Let’s say the odds of cancer ARE increased in de-sexed dogs?

What then? Does ANYONE actually think a person would keep a male dog around that was peeing everywhere and squaring off with people and other dogs? Running off every time the neighbor dog went into heat?*

Does anyone actually believe an owner would keep a female around going through false pregnancies and bleeding on the furniture, struggling to get out the door when she’s in heat, and drawing dogs into the yard for blocks, and waxing all possessive-aggressive about bowls, closets and beds?*

*All of the above still happens, even with hormone-sparing sterilization procedures like vasectomy, hysterectomy and tubal ligations.

I don’t believe EVEN FOR ONE SECOND that aggression and anxiety are higher in de-sexed dogs. That part of the Hunter College study was done by inexperienced non-vets and didn’t even discuss what aggression and anxiety looked like. Nothing in that part of the study coincided with the reality we see in the exam room. And to me, that’s a BIG problem. I have to dismiss those findings out-of-hand because the common reality is wholly unmatched by their paper.

I am legitimately concerned that there are credible papers that support that spay and neuter are actually and palpably associated with an increase in vulnerability to cancer, and that seems to be borne out in the work done by Jeffrey Nyce, whom I hold in high regard. He is the researcher I talk about all the time, who suggests that hyper-supplementation of DHEA will replace the lost “anti-cancer” impacts of de-sexing dogs.

The Only Three Things I Know Absolutely, Without Exception:

I know from a TON of experience that when any “intact” male dog comes in, he’s 95% sure to tense up, and ‘square off’ with everyone in the waiting room, pee in 5-6 places around said waiting room, and get his hackles up, and get ‘stink-eye’ when I walk into the room. VERY rarely seen an exception to that one. Keep in mind, as a professional, I can deal with that. But on the ‘day-to-day’, can the owner?

I know for a fact that ALL intact male dogs I have ever seen have consequential amounts of ‘smegma‘ (mild, persistent balanoposthitis) and smell metallic, and ‘male’.

And I know that when someone comes in with an older female dog with lumps in the breast line, and it’s intact, those are going to be malignancies with a poor prognosis without exception.  And that spayed female dogs have never come in, not ever since 1991 with breastline malignancies (But they often have hyperplasia).

It’s true that pyometra can only happen in intact female dogs but that doesn’t make it COMMON. Fact is, I’ve often thought that pyometra wasn’t a compelling reason for spay. Breast cancer is, though. Regardless of the “studies”.

So, I said all of the above to say this:

I think that 99% of clients won’t avoid spay or neuter, because it will leave their pets ‘difficult’ and ‘smelly’ and bleeding on their furniture so that they can avoid a less-than-13% chance of certain cancers after the age of 9 or 10.

I think that TONS of dogs are anxious and aggressive now, NOT because of de-sexing, but because our culture has abandoned ‘dominance’ as an owner quality and has adopted emotional ‘negotiation’ and ‘counseling’ and ‘therapy’ to accommodate dangerous or defiant pets.

Finally, to the concept of hysterectomy and vasectomy of the dogs in order to spare their hormonal integrity, which is increasingly popular among a variety of Veterinary “Snowflake”  – –  again, identically to Raw Diet  – which is another thing I endorse and have seen the merits of:

Clients don’t like BLOOD and mess. They’re not going to have dogs peeing and bleeding in their houses!

The fact that normal clients don’t want to deal with raw chicken, or bloody diapers isn’t surprising. That America is still spaying and neutering despite these percentages is not even substantially a reflection on the veterinary profession, but instead a realistic expectation on the part of a prospective pet owner.

So, what’s the point in ALL of the mewling?

PS: To close this document, let me say that I’ve vasectomized companion animals before and it’s not hard at all. Same with tubal ligation and or hysterectomy. No worse than a regular spay or neuter. A bit more time consuming, but whatever. No big deal.

So if, after consideration of the above, a client is okay with intact-ness in a male or female dog around the house, I acknowledge the myriad minor but undeniable health advantages of NOT desexing the dogs and cats. And I’d be glad to perform those alternative, hormone-sparing procedures as long as the clients ‘get it’ that the pets will still act like distracted, overwrought teenagers, and pee and bleed on stuff.

I’ll take it a step further: So far, (My position is subject to change) I’ve decided NOT to Spay Luna Boona. And the only reason is, that I’ve seen too many elderly dogs “live too long” and get all crippled, blind and deaf.

I know from experience that if I don’t spay Luna, then (about three years before she’s crippled, blind and deaf), she’ll show up with malignant breast cancer, a pyometra or a blood dyscrasia, and I’ll be within my ethical rights to put her down. I think to myself: What will she (and her humans) have actually missed by her so-called “early” demise at 12 instead of 15?

So you can see that all of the above is uhhhhh…. sticky. I maintain that there is no need for anti-spay-neuter proponents to demonize the veterinary community for doing what’s been expected of them, asked of them by owners, and traditional for them to do for overpopulation-control advocates. And the fact that more owners aren’t suspending spay or neuter is LESS about ‘evil’ ‘ignorant’ or  ‘money-grubbing’ veterinarians*, than it is about what kind of mess-and-drama an owner is (understandably) UNWILLING to put up with at home!

*There are retired human dentists who say so. 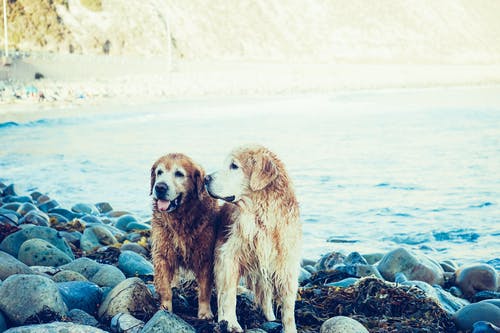 In a nutshell, altered male and female dogs are a little LESS VIBRANT in most measurable parameters. It’s (metabolically) like we’ve aged them 3 to 4 years all at once. Interestingly, my clinical experience supports that 95+% of spayed and neutered dogs live JUST AS LONG as the intact ones. Only, they spend that time just “A Little Not-As-Strong” as intact ones.

I believe 100% that we don’t have to replace bio-identical hormones to conserve a dog’s health into later years. Affordable dosing with DHEA from Amazon is sufficient according to some of the most advanced thinkers in that area. (Dr Jeffrey Nyce)

One GOOD thing from the studies that show spay and neuter may have a weakening effect on dogs against various aging factors – is the rate of later-age surrender of dogs drops DRAMATICALLY in altered pets. In other words, people aren’t euthanizing or giving away altered pets, but they dump plenty of the intact ones. And that makes sense. Intact pets are eventually intolerable, just speaking for myself.

Ajax required neuter at 6 months, to remain a viable companion. But my former Labrador “Bailey” went to TWO YEARS of age before masculine behaviors mandated neuter or ‘giving him away’.

Here are some of the studies that support an increase in vulnerability to cancer in older, de-sexed dogs.