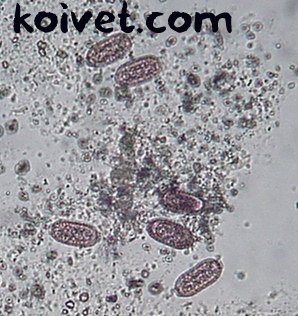 A discussion of the major worms and their control

In the past, the discussion of intestinal and other parasitic worms in Koi and Goldfish has been abbreviated thusly: “Worms and intestinal parasites of Koi and Goldfish are usually not severe enemies. In fact, your Koi and goldfish could have worms and you would probably never know it.”

Which is true, however, there are many notable exceptions. And if you were in a group of fish farmers and breeders who lost almost all your fish to a tapeworm like “Bothrio”, you would immediately challenge my nonchalance.

Let’s take a look at “worms” in Koi and see if we can make heads or tails of it.

In the first place, I have diagnosed worms in Koi and Goldfish. About once every 3 months I necropsy a fish and find this. Half the time, it’s “Capillaria” [from petstore Goldfish] and the other half the time it’s Tapes, probably “Bothrio” from a breeder farm.

Worms: What Are They?

Worms can be short, or long, thin or fat, white or red. They are squiggly tubular living organisms and usually, they’re USING a host. In other words, they are feeding on, or living in the Koi.

Regardless of whether we are talking about Tapeworms, Nematodes, or whatever, the vast majority of intestinal parasites depend on transmission through a happenstance copepod. What is a copepod you may ask?

These vaguely-referred “copepods” include all your “fish favorites”: Tiny, naturally-occurring fish food-organisms like Cyclops, amphipods, isopods, microcrustaceans, insect larvae, and even annelid worms like Tubifex. The folks with the healthiest ponds will probably have a few million of these little crunchies in their ponds, living among the plants or on the pond bottom.

Back to clinical relevance:

As I mentioned, most of what I have seen in Koi and Goldfish has either been a Tapeworm or a Capillaria species.

Let’s talk about the Tapes.

Another word for Tapeworm is “Cestodes” and they infect Koi.

The Tapes are rather fat white worms, and they are also generally flat. Picture a piece of spaghetti someone stepped on. Or a big fat white macaroni noodle with pointed ends that someone closed in a book. All the Tapeworms I’ve found have been balled up in the intestines or less commonly, around the internal organs.

There are a few, which can pass through a Koi (using it as a temporary host) while some cestodes (tapes) intend to live specifically in the Koi. In other words, depending on the tapeworm, the Koi may be an intermediate host, or a definitive host.

Probably the worst of the several tapeworms of Koi is Bothriocephalus acheilognathi – which can kill the majority among a group of infected young Koi. In other infections, tapeworms can occupy so much space in the peritoneal space that other organs are crowded, causing weight loss, and poor reproductive capacity. The problem with “Bothrio” is that it can take a long time to develop in fish, so it might be up to two years before you could detect it without cutting a fish open for a necropsy. The Koi is Bothrio’s final host. “Bothrio’s” intermediate host is a copepod as described above.  Bothriocephalus usually kills its host through sheer bulk, pressing on organs and blocking the intestines. Reproduction of this worm requires a copepod or annelid (worm) host, so folks with natural or mud bottomed ponds, which foster the growth of balanced ecosystems complete with copepods and insect larvae could give this parasite better chances of transmission.

To prevent or eradicate this worm, any new fish, and new fish being brought in from mud ponds should be dewormed for this parasite.  Otherwise, an annual deworming is probably adequate.

Other Tapeworms of Koi:

Ligula intestinalis is sometimes a serious pathogen of Koi and Goldfish. Fish are not the final host for Ligula intestinalis. This particular tapeworm would prefer to have the fish (and therefore itself) eaten by a bird. I don’t think I have ever seen this worm, the reason I say that is because it appears much larger and fatter than the common, smaller Tapes I encounter in the fish.

Khawia sinensis is another tapeworm of Koi, which causes losses under certain conditions of warmer water, higher stocking densities and heavy feeding in mud ponds or natural ponds. Khawia has its intermediate host in an annelid (leech or worm) similar to (but not limited to) Tubifex. (Other tubificids like Limnodrilus)

Like the other tapeworms, Khawia kills through sheer bulk.

The “Cloverworms” are closely related to Khawia, but are morphologically distinct, scientists can tell based on where they keep their ‘bits’ whether they are Cloverworms or Khawia, but console yourself that they all die the same when you feed Praziquantel or bathe the host fish in Praziquantel. .

Other cestodes known to infect Koi for those times when you can’t get enough big words:

Another class of worms is the Nematode class. These worms are not flat, and many of them are exquisitely small. “Nematode” is a VERY broad word which seems to encompass all the other worm parasites of Koi.

Nematodes don’t want fish for their retirement home, very much. Basically, they infect fish accidentally, or on their way to their final host. So they might infect a fish in order to get to a bird, which would be their favorite residence. (Nematodes are essentially and usually all on their way to a bird or mammal final host)

We should mention five groups of Nematode worms that can infect Koi and Goldfish. We can take them in alphabetical order.

Acanthocephala (Thorny headed worms) seem to be clinically irrelevant and require an arthropod host as well. (Fish is often a final host) I have never seen these infecting a fish, even incidentally, so I doubt their importance. Still, when seen in certain species of fish, their “nose” really wrecks the lining of the intestine and can even rupture the gut. Let’s consider them rare.

Anisakis is also comparatively rare. Anisakis is nothing if it’s not persistent, though. It can be transmitted from one fish muscle tissue to another predator fish. So, in order to finish its life cycle, it may infect a little ocean-going Mackerel, which can be used in Goldfish food. A goldfish can eat the fish meat and be infected with Anisakis. Regardless of the fish host, if the Anisakis worm is not happy there, it can encyst and wait patiently to be eaten by the fish or animal it really wants to live in. Salmon can be infected in the ocean and carry the parasite to freshwater fish as it migrates or is eaten by freshwater fish. In general, Anisakis wants to live in ocean-going warm-blooded fish eaters. This is the worm you would get from eating Sushi or raw fish, and it’s not funny when it happens. It can infect people.

Philometra are in the Dracunculoidean group. They are usually blood red and associated in or near a blood bearing organ, such as the gill, or arteries. They may be in the abdomen as well. I have not seen these parasites in real life, for all my years of doing this.

Capillaria – I have seen this one a pretty good bit. You identify infections with these parasites by fecal impressions. A simple stool sample, compressed between a slide an coverslip and regarded under 40-100 x magnification will show the eggs of this parasite. Positive fecal examinations have the typical trichurid egg: Oval in shape, brown in color, with an end-plug in each end. In many cases you will see both the adult worms and their eggs depending on how you collected the sample. If you have collected the sample from a piece of gut on necropsy, you will see both life phases. A mammal is the final, intended host. Sometimes they get into fish and can mature and reproduce without ever finding their way to a warm blooded mammal host. Eggs shed in the water embryonate and are eaten by fish. Since Capillaria does not use a copepod, worm or insect larvae host, and the eggs are the infective form, it’s life cycle is considered “direct” which makes infections more common and easier to sustain in your pond or aquarium.

Despite the fact that Camallanus delivers live young and not eggs, this nematode requires an arthropod / copepod host (like Cyclops). The adult worms in the intestinal tract of infected fish will produce and retain eggs. These eggs develop into juvenile worms and are shed. The juvenile worms must be ingested by copepods. Inside the copepod, the worm matures into an infective stage. The fish then eats the copepod and the infection is complete. This worm is found as an adult in the intestine of the fish and will even protrude from the vent as a reddish tuft. It’s more common in farm-raised livebearers, such as those from Asia or Florida. This worm damages the intestine and feeds on the fishes’ blood, causing stress and weakness. I have not seen this worm in Koi so far. I have seen it with some frequency in fish I’ve necropsied from pet shops.

Bottom Line: Find a dewormer to feed to your fish (or deploy in the water) which contains effective levels of BOTH Praziquantel and levamisole to clear all of the above pathogens and do this annually or as determined by your periodic review of stool samples under the microscope from your fish. Labelling should clearly show that the product works on Cestodes and Nematodes.