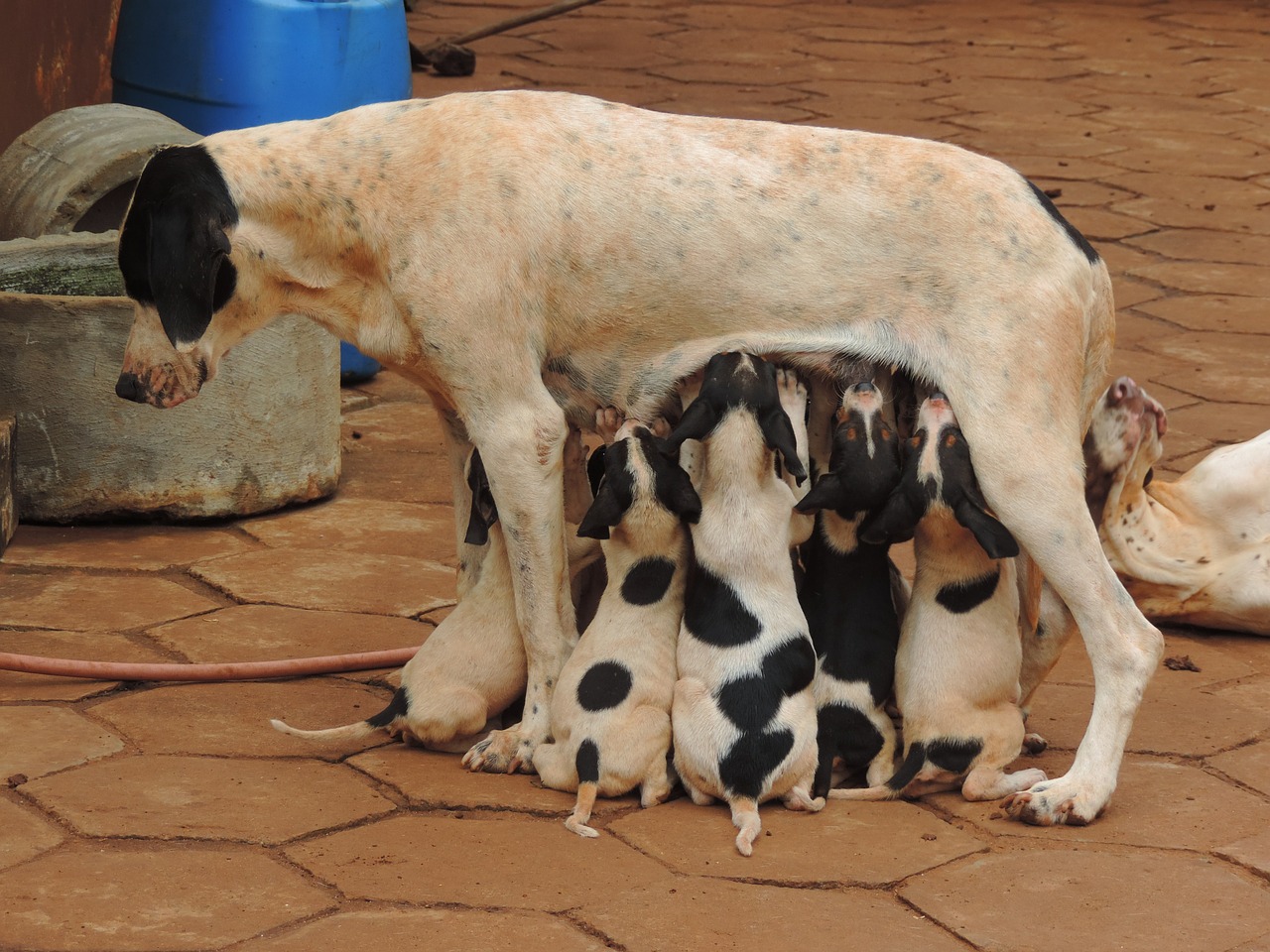 Canines – Dogs Giving Birth And How We Can Ruin-It-Up

The act of delivering, or whelping, is a natural process for many dogs, but there are exceptions where normal birth is extremely difficult or sometimes, impossible. Except in cases where a veterinarian must be consulted, it is best for whelping to take place at home in quiet, familiar surroundings. A special box (either cardboard or wood) roomy enough for both mother and puppies should be available three to four days in advance of whelping. The box should be situated in a place that is out of the way of household traffic, yet easily accessible. Several thicknesses of newspaper make the best bedding to use in the box. Sometimes if you use a blanket it can lose a puppy in the folds plus or minus smothering it. The inside edge of the box is sometimes equipped with a “bumper” that keeps the Mom from compressing a puppy against the side of the box. She leans on the bumper and the hapless puppy is protected under the lip.

Signs of pre-labor can occur anywhere from 8 to 24 hours prior to true labor. This period is identifiable by the following signs and these are SUPER indicative. To the extent that when someone calls the office and I think it’s a false-alarm I’ll have them take the temp. It’s a ‘thing’ that’s pretty consistent.

1. Moms usually refuse food.
2. Rectal temperature falls below 100 degrees.
3. Agitation is apparent and attempts to find seclusion may be made.

During true labor you will observe definite abdominal contractions. You don’t have to use your imagination. Should contractions persist for longer than TWO hours without the birth of a puppy, notify the veterinarian. (Or a dog breeder because they are actually better at veterinary medicine than Vets are, if you ask them) Shortly after the onset of true labor, you may notice the appearance of a distended membranous sac at the vulva (girl parts). These are the fetal membranes. They indicate that delivery of the first puppy is well underway. With continued straining, the pup will be delivered. Mom will usually chew the sac from around the pup and break the umbilical cord.

Sometimes you see a puppy with a kinked tail “since birth” and often, that’s when a new mom accidentally crimps the tail mistaking it for the umbilicus!

Continued licking of the puppy stimulates respiration and crying. If the mother fails to break the membranes pretty quickly after the delivery, you should do so yourself. It’s seldom necessary but you can use clean white thread to tie off the umbilical cord approximately 1 1/2″ from the abdomen. Then cut the cord with scissors (previously cleaned with 70% isopropyl alcohol). Brisk rubbing with a dry towel should be continued until the puppy is crying vigorously. Be careful not t smash it’s head or break its neck. Use common sense.

After the puppy is breathing normally, the umbilical stump should be painted with tincture of iodine. This is “nice” but not absolutely necessary.

Place the puppies in the whelping box (next to the mother or where the mother can easily see them). You may place a heating pad in the box on the LOWEST SETTING (and under a towel or blanket) or a hot water bottle. Puppy deliveries are normally spaced a half hour intervals, although an hour interval is not unusual. Total whelping time averages 6 to 12 hours. We had a Fila Brasiliero which took twenty four hours to produce all her pups. That delivery went overnight and so puppies were born on two dates. I can’t remember if we split up the litter on their papers or not ha ha ha!

Here’s something they almost never tell you:

The single most important thing you can do for a female in labor is offer good, appealing food to keep her energy up! Most dystocias (low calcium or “running out of steam”) can be avoided with this simple advice.

When whelping is completed, you should offer her a small amount of food and water, but don’t be alarmed if she refuses both.

1. Dark red or dark green discharge PRIOR to delivery.
2. Failure to produce a puppy after 2 hours of active labor.
3. Extreme depression and cessation of labor.
4. Gestation beyond 68 days with no signs of labor.

Calcium; in the form of yogurt, cottage cheese or a multi-vitamin (not milk) should be given soon after delivery, as milk-letdown ensues. Sometimes folks give a lot of calcium before parturition and what happens is that the parathyroid gland doesn’t get a ‘warm up” and so its caught off guard at let down (milk production after delivery) and eclampsia can result.