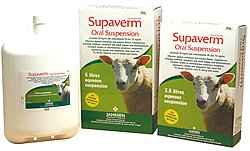 Supaverm was used for Flukes when Praziquantel was too expensive. Supaverm would still have a use in eradication of GOLDFISH from Koi ponds because it is selectively toxic to goldfish, not Koi. What follows is a legacy article from when I doped out how to use Supaverm more than a decade ago. It’s still relevant in that someone might still HAVE to use Supaverm, someone might be killing off goldfish, or someone might be curious about Closantel or Mebendazole in fish.

Research is finishing up on Closantel/Mebendazole combination, branded “Supaverm” from the UK. We’re going to watch all surviving treated fish for signs of toxicity for several more weeks. We are not tracking changes in blood parameters. This would be interesting if funding was available.
“Supaverm” is the trade name of a nematode and cestode treatment from Janssen Animal Health. The active ingredients are Closantel (5mg/ml) and Mebendazole (75mg/ml).
Mebendazole:
Mebendazole belongs to the chemical group of benzimidazolecarbamates. Its full chemical name is: Methyl 5-benzyl-1H-benzimidazole-2yl-carbamate.
Closantel:
This is a new broad-spectrum anti-parasitic medicine. It is especially effective against nematodes and cestodes, including hepatic flukes. Closantel’s full chemical name is: N-[5- chloro-4-[(chlorophenyl)cyannomethyl]-2-methylphenyl]-2-hydroxy-3,5-diiodobenzamid. Molecular formula of Closantel is C22H14Cl2I2N2O2
Mr. Chuck Downs had read with interest the reports from the UK concerning this compound and made arrangements to provide us with some Closantel/Mebendazole combination for testing purposes.

He writes: “Recently, I’ve discovered that koi keepers throughout the UK and even some of the breeders in Japan have been using a new treatment for flukes called Supaverm. From what I know, Supaverm is actually a ‘sheep dip’, and contains Closantel at 5 mg/l and Mebendazole at 75 mg/l as the active ingredients. The results look fantastic, with universal 100% elimination of flukes, with only one treatment (adults, eggs, etc. all wiped out)”.
“The nice part is the dosage is extremely low (2.2 ml per ton, or 1000 liters). Since my pond is 22,000 gallons (roughly 85,000 liters), that only amounts to 187 ml to treat my pond. A gallon of the stuff costs around $50 US, but I think you can only get it in the UK.”
The Systems:
Eight systems were treated with Closantel/Mebendazole combination.
System One:
(150 gallon)
(1) Red tail catfish 22″
System Two:
(150 gallon)
(8) Koi varying from 5″ to single specimen of 18 inches.
(12) Pembrooke Goldfish
(7) Wakin goldfish
System Three:
(150 gallon)
Pacu, Alligator snapping turtles.
System Four:
(10 gallon)
(4) Shubunkin Goldfish
System Five:
(10 gallon)
(4) Shubunkin Goldfish
System Six:
(10 gallon)
(4) Shubunkin Goldfish
System Seven:
4000 Gallon pond
Koi and Koi:Comet hybrids
System Eight:
300 gallon pond
(12) Ranchu Goldfish breeder adults
(2) Small Koi
Systems one through three were also treated with 0.3% salt.
Systems four through six used carbon in their filtration.
Regimen Used:

Each system was populated with fish. In all of the systems containing Koi or Goldfish, the presence of flukes was confirmed by microscopic biopsy of skin, gills and fins. The systems with the other fish were included to test the safety of this compound with unknown (heretofore untested) species of fish.
The U.K. dose of this compound is 1 ml per 90 British gallons. We dosed 1 ml per 100 US Gallons.

100% of Goldfish treated are dead. They died in each system over 36 hours from start to finish with 100% morbidity and 100% mortality.
“I lost a lot of beautiful Goldfish by not waiting more than seventy two hours to call it “safe”. I mean, I lost like sixty extremely large Goldfish. I am very glad I lost the fish and did not send out information that would have killed yours. ” Doc Johnson

Re- Supaverm, we have used this for some 3-4 years & would report as follows:
It is a suspension rather than a liquid and MUST be shaken thoroughly every time before measuring out for dosages to ensure the correct amount of active ingredient is within the overall dose.
It is also light-degradeable so ensure opaque bottles are used also store in a dark place.
I have no experience in using Supaverm – or any other Koi medications we use, on any other species of fish life. However I do know a colleague of mine who has a water garden centre nearby used Supaverm on thousands of Israeli goldfish from 1″ to large sizes with no ill-effect – all flukes destroyed, however he did not use salt at same time. At the same time I have heard that others have killed goldfish by just using Supaverm on its own.
Although my company and many Japanese breeders have used this product with amazing success and continue to do so if flukes manifest themselves with complete confidence. There have been others who have suffered problems which do not add up at all.
One fellow, two years ago, inadvertently dosed his pond with a double dose of Supaverm – Koi looked a little miserable but next day were all fine – no further related problems or damages due directly to this mistake.

Several UK dealers have used Supaverm on day one & then have used it again on, say day seven – as they would with, say potassium. They have had no microscope so assume eggs may have hatched since day one. On several occasions the first dosage has proved totally safe to the Koi but the follow-up has produced problems at day 2 AFTER the second dosage.
Symptoms
White skin changes to red skin & Koi look very sick. Most eventually recover but I do not know the exact reason for this.
In any case we do not use automatic follow-up dose on any medication unless microscope reveals a problem.
Note From Doc Johnson
“The active ingredients in Fluke Tabs are Trichlorfon and Mebendazole.” Doc Johnson
“The presence of Mebendazole in the Fluke Tabs is probably the reason for the occasional pinking you see in Goldfish if the Fluke Tabs are not removed expediently.” Doc Johnson

SupaVerm III – by Doc Johnson
You can sometimes get SupaVerm for less from your local livestock ranchers. Do NOT tell them that you’re using it for fish.
Recently, discussion about SupaVerm dosing.
A company with which I consult has recommendations for three doses. Their product is not watered down. They are doing what I suggest they do as far as dosing. Here’s how that was derived.
This is because when I first tested SupaVerm, I found some systems had flukes after treatment #1. Hopefully ya’ll have read the results carefully??
To wit:
“In systems one through three, no second treatment was needed for the flukes. Microscopic biopsy confirmed that the flukes were entirely gone within only 12 hours. Ich remained on these fish for three more days and disappeared.
In systems four through six, a second biopsy at the twelve-hour mark showed abundant flukes. These systems were not salted, and they contained carbon. It is possible that the carbon removed some of the Closantel/Mebendazole combination, or more likely; that the salt accentuates the Closantel/Mebendazole combination effect on the flukes.”
The Brits use one dose. That’s fine, but do they also do microscopic studies in *all* instances to confirm efficacy? Maybe not. But I did. And in some cases two doses were required.
The next thing was “use in the field”.
Just a minute…You should be aware that quite a few of the ‘pundits’ you may listen to don’t even have Koi of their own. Some of them never have owned Koi. Some of them have never even used SupaVerm and still write all about it. You have to know this happens all the time. Like when Alabama’s J. B. had all that “hot new warning information” about Program(tm), which has safely come into widespread use among fish despite her initial dire predictions..
I have Koi, I have had almost a dozen different ponds over the last few years, and I use SupaVerm extensively in my own collection whenever I get a new fish in; because my mortal fear is the darn Flukes!

So I know what I am talking about. I ALWAYS use two treatments, usually a day or two apart. I personally don’t, and have not had to use, three doses.
Then there’s the “use in the field” thing.
When “clinical experience” converts into field trials, there’s less control over the “variables” so not everything I found to be true is gospel, but I consult with Blue Ridge Fish Hatchery, Carl Forss, and Ed Otero on occasion as they try to help their customers and-or friends, and it has started to “trickle in” that (because they are all competent to use a scope) they sometimes find flukes after about ten days, even with the two treatment regimen.
Universally, that delayed “third treatment” nips these off and the problems are solved.
So, use one dose if you want…There are those using SupaVerm once, who believe something is true just because they say it is so. “Flukes are gone” – okay, whatever you say, governor.
Or, use three doses.
But in the personal expenditure of a whole liter over the last year on my fish and in the cases and facilities I’ve prescribed it; I’ve encountered no neurologial problems. That’s plain old hysteria. A kind of ‘propaganda’ with the flavor of “Listen to me, I have some secret conspiratorial information no one else knows.”

I am sure Pete Waddington and the folks who have used SupaVerm for years are laughing at the neurological signs ‘voodoo’ we are ascribing to the product.
Experience. It’s really needed, before hysterical comments are made.
This is the nut shell: Use SupaVerm for flukes once. Wait one day. Biopsy with your microscope. Only treat again if there are flukes left. If you have to treat again, Treat on day “three”. Biopsy again twenty four hours later. If no flukes are found, probably you’re clear. Biopsy again on day ten to make sure you’re right. If no flukes are found, you’re done.
Here’s the dosing regimen in case you don’t have a scope or don’t want to mess with it:
DOSE: One milliliter per one hundred US Gallons, on “Day One”, “Day Three” and “Day Ten” without water changes or bypassing the filter. Remove carbon from the filter.
The ONLY symptom I ever saw with fish having a reaction to SupaVerm was in several species *other* than Koi. I have never seen any reaction in Koi. Ever.
And in the affected species, all I ever saw was skin reactions – just an incredible, runny slime coat, and pinking up, and then death in most instances among the following species – Goldfish, Hi-Fin

Banded sharks, Plecostomus (50%) and it really mauled but did not kill the redtail catfish.
Anyway, this is offered as some clarification of the dose on SupaVerm and how it has evolved.
Doc Johnson
“SupaVerm is pretty dang safe.” Doc Johnson