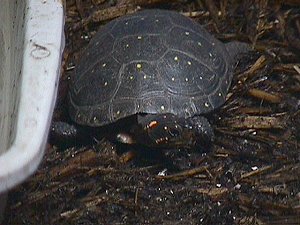 Country of Origin: In the Northeastern United States, spotted turtles might be found in larger vernal pools, particularly those close to other wetland systems. Spotted turtles move about in search of feeding resources and are apt to feed upon salamander eggs in vernal pools. The spotted turtle is yet another species in decline in North America and should be protected whenever found. They are legally protected in a number of states. They range from southern Ontario and Maine southward along the Atlantic Coastal Plain to Northern Florida, and westward through Ontario, New York, Pennsylvania, central Ohio, northern Indiana, and Michigan to Northeastern Illinios.

Introduction: The first turtle appeared on the Earth about 200 million years ago, long before the dinosaur [Jurassic period 130 Million years ago] was even a thought. Today, these popular and easily recognized creatures are found in almost every environment. There are 86 different genera in all, and there are 20 genera in North America. 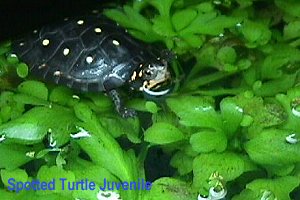 Worth as a Pet: Spotted turtles are extremely adaptable to a variety of conditions except protracted chilling and dryness. They can be happy in moist peat, leaf litter, or sphagnum moss which is kept moist and [preferably] warm. They are just as ‘at home’ in water-turtle environments, swimming all the time with Red Ears and such. They do need a landfall for basking and sunning. For breeding, they will need a suitable landfall with soils of a variety of types so they can choose what they prefer. When eggs are discovered, they may be removed and incubated. Do not roll or invert the eggs. Usually, their small eggs go unnoticed and hatch the following year.

Morphology: This small (to 5 1/2″), black turtle has round yellow spots on its smooth carapace. Only the youngest turtles will have rings in their shells. The round yellow spots are transparent areas in the scutes, overlying patches of yellow pigment which may fade away with age. Some older individuals are completely spotless. The plastron [underside] is yellow to orange in color and has black blotches along the edge onto the bridge. Yellow spots are usually present on its head. Other skin color is gray to black, and occasional yellow spots occur on the neck and limbs. Males have tan chins; brown eyes; long, thick tails with the vent near the tip; and a slightly concave plastron. Females have yellow chins, orange eyes, and a flat or convex plastron. 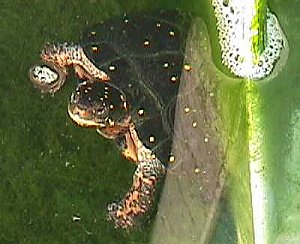 Feeding and Behavior: Spots eat best in the water. They will take any form of insect except hard bodied beetles. They prefer prepared foods in captivity; they’re perfectly happy to take prepared Koi and Goldfish foods from the water’s surface, and do very well on this. They will eat worms, tadpoles, crickets, and PetsMart’s SuperWorms if thrown in the water. They have been observed to eat Wisteria plant in the abscence of regular feedings.

Housing: My turtles have been at home in warm bog settings; on moss, leaf litter and topsoil. They do well in humid environments even on AstroTurf. Over the summer, after egg laying is long past, they are moved to the swimming pool, where they swim and bask and put on weight eating koi pellets.

Lighting: If the hobbyist cannot provide natural sunlight unfiltered by glass [which removes 65% of valuable ltraviolet] then full spectrum lighting is paramount. Perhaps the best fluorescent tube at this writing is the CoralLife TriChromatic fluorescent available in a variety of lengths. Full spectrum lighting biologically activates certain vitamins in the skin (D&E) which catalyze/facilitate Calcium metabolism.

Notes: This is a protected species which is on the decline in their natural territory. Please ttry to obtain captive born specimens before accepting a wild caught one.