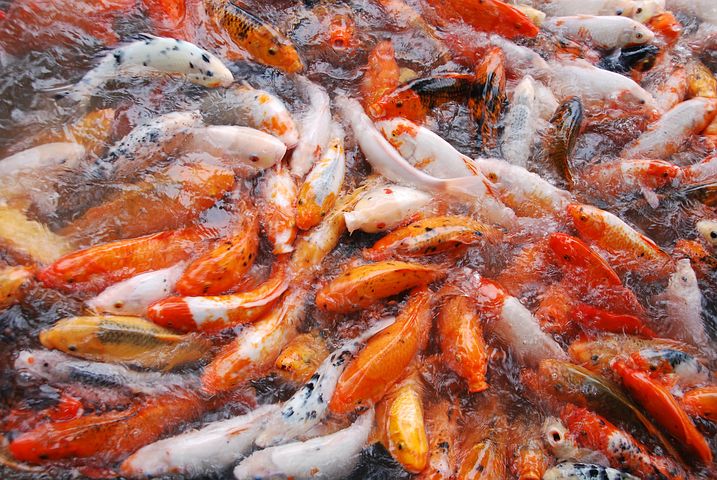 Hey, I’ve imported ONE group of “hundreds” of fish from Japan “for real” including going to the airport, meeting USFWS and all that. And I’ve been around the triage of imported fish a half dozen times. But I’ve treated recently imported Japanese fish HUNDREDS of times at their arrival in the US. So I’m no “importer”. But I know “fresh from Japan koi illnesses.” They’re hardly unique to Japanese fish but those fish DO travel a lot further than domestically shipped fish.

Importation of Koi from Japan
(US Only) First, you need to know *exactly* when the plane will arrive and arrange to have a US Fish and Wildlife agent prepare to be there for their arrival. They will require some paperwork certifying the shipment came from facilities that have been SVC free for the last two years. Very few such facilities exist but these papers are easy to “doctor up”. The shipper usually has all that worked out and this has not proven to be much of an impediment so far. I suppose eventually all the facilities really WILL be certified free and won’t have to dress up their paperwork.
USFWS will examine the bags for any contraband fish, (they’re pretty careful) and then you clear the fish through customs. Then you take the fish and place them RIGHT AWAY (At the airport!) into PHASE ONE of our very successful Koi importation technique:

PHASE ONE – HOW TO SAVE FISH:

Phase I is basically getting the fish out of acid pH water*, that’s loaded in ammonia, high in Carbon Dioxide and depleted of oxygen. And INTO water with a neutral pH, zero Ammonia and plenty of Oxygen.

Simply transfer all fish by hand, or dip net, to prepared “receiving bags”, about 1/3rd full of fresh water (virgin water in which no fish have yet lived) at 74-76 degrees which has been pH-buffered with SeaChem® Neutral Regulator [or comparable] and dechlorinated. There is considerable disagreement as to whether you want to raise the pH from shipping to receiving bags, that quickly and the answer to me is obvious. I recommend moving the fish to good water and a nice pH at neutral at once. Incoming and recipient water should be close in temperature. If the fish are coming from Winter water, you should know this and plan accordingly to NOT bring warm water.
Do not salt this first-phase water. Do not put any Ammonia binders in this first phase water. Do not put any medicants in this phase I water.

Note: If you raised the PH in the shipping bag WITHOUT rescuing the koi from the ammonia, they would promptly die. In *FACT* it’s a “thing” that when you open the shipping bag and some of the CO2 blows off, the pH can start rising and the toxicity of the ammonia in the bag can be a serious threat. Which is why Phase I is an “all out” thing. (At the end of the article is how the wholesalers do it)

All receiving bags are then re-sealed under PURE oxygen. [Ratio of three liters oxygen to one liter of water in the bag] The oxygen fill-tube can be allowed to bubble under the new water’s surface for a moment or two, and then the bag is filled, but the bag is also allowed to overflow with pure oxygen and then is finally sealed. If you can’t provide pure oxygen to these fish in the first bag there’s almost no reason to do it this way because what you’re doing in the first phase is “hyperbaric oxygen therapy“.
You can get an oxygen tank and regulator from any welding supply house in your town. No prescription is required.
This “clean water oxygen therapy” is the first key! Fish which are casually transferred from the old stinky Japanese shipping-water to domestic holding tanks do not get the benefit of PURE OXYGEN THERAPY and the difference in terms of “eventual” mortality is great.

You will be amazed to see that oxygen-deprived fish which arrive at the airport ‘inverted’ and near death can be salvaged by this initial “receiving bag” with pure oxygen triage.

Leave the fish alone under pure oxygen and clean water in cool environment for two to four hours. If fish are quite warm on receipt, please use ice packs or cold water sprayed on the bags to slowly cool them to the mid to high seventies F. Cooler water carries more oxygen but please don’t shock the fish. (> 20 deg F drop)
We let our fish set in their bags for a few hours and then carry them home to the receiving facilities. I’ve never imported more than 250- 300 little fish before. So I can’t speak to feasibility of the following in larger groups of potentially larger fish.

We take each fish out of the bags and quickly inspect each one. We perform skin biopsies ON ARRIVAL of one fish from each bag in case they were batched at the trans-shipper. We inject all fish…(judgment call, you decide)

After the fish were under pure oxygen in cool, new water for two hours, open a bag and start removing one fish at a time, examine for infections, on fins, mouth or body. Surface-biopsy a few random specimens and examine the mucus under the scope. Inject EVERY single fish in the group (This is the second key!) intra-peritoneally with Baytril, or something like Rocephin. Make no plans to re-inject.

Inspect your previously prepared facilities. They should be equipped with Aquadyne filters or qualitatively similar de-nitrification system, but they must be AEROBIC and fully “cycled”.  If you don’t have a dedicated receiving system, it’s okay. If you’re dealing with a smallish group of fish in a receiving facility under a thousand gallons you could use sponge filtration and any system can be started by bioseeding. See video at end of article.

KEY: Absolutely NO Ammonia is tolerable in receiving systems.

For best results, each system should have a temperature of about 74-78 degrees F. This recommendation has to be conditioned against the prevailing temperatures. For example, if you know the fish were wrested from an iced-over pond in the mountains of Niigata, then you should not drop the newcomers into warm water. They have to be warmed slowly. If the fish came from very warm water, then they will do fine in water in the mid seventies.
Currently, because of the KHV virus endemic, it’s wise to consider using heat (at 83-86o F) at some point in the quarantine in order to denature the KHV virus if present. Some folks prefer to “wait and see if it breaks” and I think it’s silly. All you have to do is swing them over 83-86o F and hold the fish there for four to seven days and the virus is “gone”. It’s (KHV virus) capsule (covering) is labile, and denatures at high temperatures. The only way the virus survives from year to year, to haunt us in following years is via broodstock which are kept cool (for example, in Springs) and never achieve temperatures sufficient to activate the virus. The only problem with empirical heating is that some Gosanke might lose red.

FOR KHV prevention by retailers, in a perfect world, you would hold the incoming fish at 72-76 degrees F for two full weeks to allow the disease to make it’s appearance. You would keep sentinel fish, (SPF fish from University of Georgia) WITH the new fish and at the end of the 2 week quarantine you would ship those SPF fish BACK to UGA and they would be examined for virus particles. This would be the most reliable method of determining the infection status of the new fish. Ehhhhhhhhhhhhhhhh, in a perfect world.

Let’s get back to the receiving facilities:

Each facility could have an UltraViolet Sterilizer to maintain lower-than-usual bacterial numbers. (Live plants are as good if not better due to their phytoagglutinins and provide other water purification benefits as well as physical cover for hiding) Each system should have vigorous aeration and circulation. Both UV and aeration are equally important! The fish will be internally adjusting from acidosis, and hypoxia and probably significant hypercarbia and aggressive gas exchange in the holding facilities will work wonders on fish survival rates.

I would interject here that having a cycled REAL pond to put new incoming fish into would be even better as long as you could re-catch the fish if needed. Algae, philodina, plant agglutinins and other living ecosystem items are your friend.

The facility should feature styrofoam box-covers floating on the water’s surface, occupying no more than twenty to thirty percent of the surface area. The foam is for “cover” like artificial lilypads, to keep fish feeling secure and reduce the desire to jump. This facility (completely unlike the initial receiving bags) could be salted to 0.3 – 0.6 % (three to six pounds of salt per hundred gallons). If your floating piers of styrofoam are too large the small koi may jump up onto them and not be able to flipflop back off. Too much coverage of the surface may also impede oxygen exchange.

Netting is a good idea as all new fish a prone to jumping to their deaths.

Feed Tetra Tropical Fish Flake food twice per day every day for up to two weeks then switch to the standard pelleted food. No corn in the top three ingredients.
Freeze dried Krill are also excellent – crumbled or whole for new fish settling in. Medicated food is good, later, to sustain the new fish against infections. Do not overfeed. It will pollute the water and may overload the filtration / nitrification system.

If you will use the oxygen therapy on the fish at the airport and you will heed my advice on housing, feeding and warming the fish, you will have better luck on Japanese fish receiving.

Wholesalers businesses are USUALLY near airports and take the fish directly from the airport to the warehouse where they open the bags and start trickling clean, oxygenated, inhabited water into their bags to overflowing. So that over the course of an hour or three, the fish experience the total replacement of their ‘shipping water’ without an abrupt adjustment.