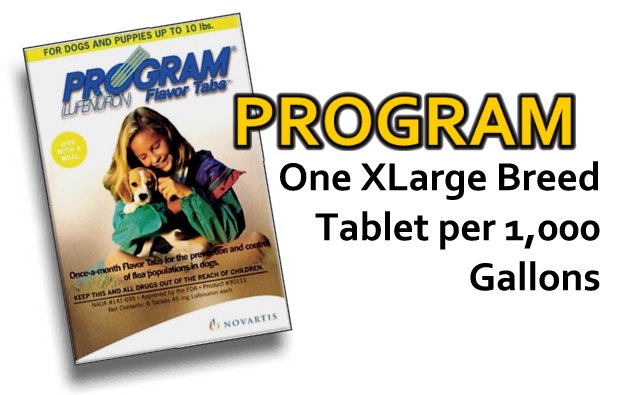 Program Lufenuron is gone from the market. It’s been replaced by Sentinel which is unsafe for use with fish at this time as we have not worked out the dosing of the milbemycin oxime fraction.

This article is left online for two reasons: First, perhaps someone stumbles onto this article and gets updated about CyroPro and better treatments for Anchor Worm and Fish Lice.

Also, in case someone actually has some Program laying around. Or if they have access to agricultural Lufenuron in Larvadex etc.

Program Update: 1-01-2002 Program Lufenuron – Completely safe and effective even in its new chewable form. Grind up one white (490 milligram) tablet and apply to 1,000 US Gallons. Overdosage is patently impossible. No reapplication is usually needed.
(1997) Results are in. Again and again! Dimilin is not the *only* weapon against crustacea (Anchor Worm and Fish Lice) anymore. Dimilin is effective, yes. But hard to get, too often… Your local Veterinarian has a medicine for use in dogs and cats called Program [lufenuron] which is a sister compound to Dimilin [diflubenzuron] and Larvadex…Program is used as a chitin-synthesis inhibitor in the control of fleas.
The Program for dogs can be used just the same way Dimilin is; for the elimination of macroscopic crustacean parasites such as Argulus, Lernea, and Ergasilus. Neither Dimilin nor Program will eradicate [Trematodes] Flukes.

“Large Dog” size, [White] Program is used. DOSE: One tablet per thousand gallons to be treated – the pill is crushed *extremely* fine and mixed with a gallon or so of water – the emulsion is distributed around the pond evenly…Discontinue UV and Carbon during this time. Lufenuron (Program) takes four days to clear worms or lice in eighty degree F or warmer water. It took five days to clear lernea elegans in 68 degree water.
There’s no toxicity to fish or filter, just the same as Dimilin. So, no more hunting for Dimilin on darkened street corners. Ask your Vet. Doc Johnson 8/18/97

CyroPro and better treatments for Anchor Worm and Fish Lice.

Update 3/18/98 – Program has been used coast to coast over thirty documentable times, and is completely safe and effective. What follows are some messages from other folks using Program on their Koi. They did not die nor was the product ineffective as asserted so early on by “Dr.” Joanne Burke.

SUCCESS: “Hi Steve, I was able to buy Program 3 weeks ago in central Texas. Vet was very interested in the fact that I was using it as a treatment for fish lice (he had never heard of it). After a week, I finally declared the fish ‘healthy’. ~JS Rich,
“The dosage® for Program is one tablet for large dogs per 1000 gallons. Crush the tablet to a very fine powder then add to a gallon of water. I found it easier to get the powder suspended in the water if you use a blender at low speed. Visit Doc Johnson’s page for full details on its use.” – Steve

WITCHING SYNDROME: The usenet newsgroup rec.aquaria.ponds has been “consulted” on this matter – to establish with their pundits indeed, whether the above is true, and after serious deliberation and discussion (but not testing), they have decided that the above is not true.
Just get a load of this: “Guys I wouldn’t be using this just yet, I have a call in to Dr. Wyerick at Ciba who developed the stuff so just wait before jumping in until she calls back.” Jo Ann aka/Laz (JoAnn Burke @ Dandy’s Orandas) Later, we get the verdict from our enlightened friend:
From: Lazulifawn@aol.com To: goldfish@once-ler.cs.umass.edu
Subject: Re: dimilin alternative via Program Message-ID: < 970915151815_1296435530@emout08.mail.aol.com>
Hi Guys, Well, Katrina [Wyerick] just called me back and it doesn’t look good for Program. It is basically designed to eradicate anything with chitin in its system, and according to Dr. Weirick, very few aquatic creatures have this (Doc adds: This is wrong), crabs are a good example of aquatic life who do. [This sentence demonstrates that neither Joanne Burke nor Dr Wyerick know that branchiurian (argulus) and crustacean (lernea) parasites are made of chitin. What a hoot!] Joanne continues: “…It is also liposystic [spelling] which means it remains in the fatty tissue of what ever you are treating. It is also non-water soluable [spelling] and simply lays in the bottom of the tank of hume until it starts its very extensive breakdown time of only 50% in a two week period. I would really think twice about using this as insects that are necessary to the environment and their larvae which use water as an incubater for the adult bugs would be severly damaged by this and God knows what would happen in open water ways if this is discharged into it. The call, of course is always yours, but I for one would not be attemping to use this particular method of treatment. Jo Ann aka/Laz

(Misspellings and poor grammar left in the above, I think it’s illuminating)

What an informed response! With Dr. Wyerick’s information, they feel they’ve effectively refuted the results of replicable studies that show Lufenuron is extremely effective. “I guess as long as it makes them feel self important to ‘poo-poo’ other peoples innovations, and it doesn’t do more than confuse people, then we should turn our heads.” ~ Doc Johnson

CyroPro and better treatments for Anchor Worm and Fish Lice.

061202 – Update: “I don’t have a problem- I just wanted to tell you I tried the Program treatment for my fantail goldfish. Two weeks ago I noticed the parasites. The fish were sluggish and not eating much, but not desperately ill yet. I visited your site, easily decided that they had fish lice. Since it was a long weekend I salted my ponds until I could get some Program from my vet. This made the fish seem more comfortable. As soon as I could, I bought the Program, treated both ponds and waited. It seemed that each day they had fewer lice. It has now been 10 days and I can’t see any evidence of fish lice on any of the fish. I didn’t lose any during the process. I’m delighted! Thanks so much for the excellent advice.” Kellie

It’s been ten years and people like Jo Ann are just as stupid as ever and still spewing vomit on people who try to help (other than themselves of course) and so it is with no regret that I turn my back on this issue and discontinue my attention to areas of new product usages and improved treatment regimens for the benefit of Koi hobbyists, leaving the hobby supplicant to uneducated hate mongers with no education and no qualification to be derogating those who are qualified and who spend their time helping.
– Dr Johnson (April 2008)