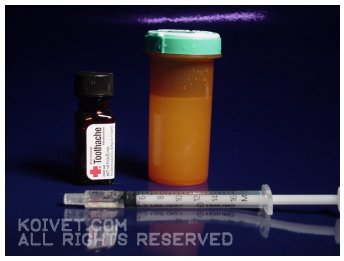 You should place the fish in a five gallon bucket with three gallons of it’s accustomed tank water. Make sure the bucket is aerated and cool.

Oil of Cloves for Koi and Pond Fish Anesthesia

You should get 100% pure Oil Of Cloves or you could get “Tooth Ache” remedy which is 85% Eugenol.
When using Oil of Cloves, put five drops per gallon (after emulsification, see note below) into the bucket.

Getting oil of cloves is easy at Amazon.com

Emulsification: You have to emulsify the anesthetic. Simply place the required number of drops of Clove oil into the ziploc baggie or jar with a little bit of the bucket water, cap it, shake it ’til it becomes whitish fluid, then pour this emulsion into the bucket with the fish.

The fish should be asleep in about seven to ten minutes. You should still see gill movement.

Sometimes it takes more or less depending upon temperature. The water should be aerated.

You need to WATCH the anesthetic process and the fish! You can begin the handling and other procedure when the fish is still slightly active, but not actually capable of struggling when picked up. If you leave the fish in the oil mixture until gill movement ceases entirely, you have likely killed the fish. If gill movements become too rare, (less than five excursions per minute) then you should rinse the gills with fresh water from the tank.

Failure to have someone watching the status of the fish is where most of them die. Then some fool blames the anesthetic dose, and not the anesthetist!!!

Taking fish to the brink of death is not easy with Oil of Cloves. You can dose them with 100x overdose for fifteen minutes and lose only a few of the fish.

Deliberate attempts at humane euthanasia with Oil of Cloves are sometimes not successful. The fish revive after being placed in fresh water for up to two hours.

Never give up on a fish which seems to have “died” under anesthesia with this very safe compound.