In the first two parts we discussed how easy it is to get so-called “veterinarians” to prescribe [open the automated, online gateway for you to freely order] medications for fish (and this project) and where to find so-called “pharmacies” slack enough [with software blind enough] to fill those rickety prescriptions. And that ain’t down the street at some human pharmacy.

Now let’s talk about how to use medications to treat fish with bacterial infections.

For the longest time, folks have mixed the medication with oil to get it to bond with a floating pelleted food. Since oil and water don’t mix, the concept was that the medication, mixed in the oil would stay on the food but quite often you notice the oil and the medication floating off the  food in oil droplets that quickly disappear in the skimmer.

I was looking for a way to bond a medication to a pellet in such a way that it was STABLE in water and stayed on the food til eaten.

Shellac came to my attention in another area of medicine and so I decided to research it for fish food. And everything looks good including initial feeding trials.

Shellac in a safe, edible form is the active in “Confectioner’s Glaze” which is what I bought for about $14. The solvent seems to be nail polish remover or acetone. Which is FINE because once dried, it’s 100% gone and it’s regarded as ‘edible’ for people. I mean, it’s wedding cake glaze!!!

You can’t use regular shellac for furniture because it’s solvent is highly toxic, while the ‘actual shellac’ isn’t toxic at all.  Hence, the need for confectioner’s glaze.

The fish love it. They’re not “put off” at all by the medication or shellac. I’m mixing Pineapple flavoring. I’ve fed it to at least 5 species but mostly to Koi. NO untoward effects.

What we don’t know yet, (but Jim Reilly* already does): Can the fish actually extract the medicine from the shellac on digestion, even though they eat it, and normal poop comes out –  DOES IT ACTUALLY WORK?

Mann’s Fish Company a bait company in Eufala Alabama did some “taste testing” with carp to see about a bait or attractant for coarse fishing and they discovered that PINEAPPLE is a carps FAVORITE food bar none, not even livers, blood-balls, garlic, shrimp –  NOTHING compared to PINEAPPLE. And that comes into play now.

How to Use the Confectioner’s Glaze

Confectioner’s glaze has no rival in “stickiness” it is like working with super-glue. It’s definitely stickier than paint, and with the solvent, it dries REALLY fast.

Where to Get Medications – Safely and Cheaply (Chart)

What medicine? How Much?

I didn’t know off the top of my head but the following contains information of tremendous value. Note the last page of the document with dosing that reads like “Certain Number of Milligrams per 1 Pound of Food” which is simple enough. 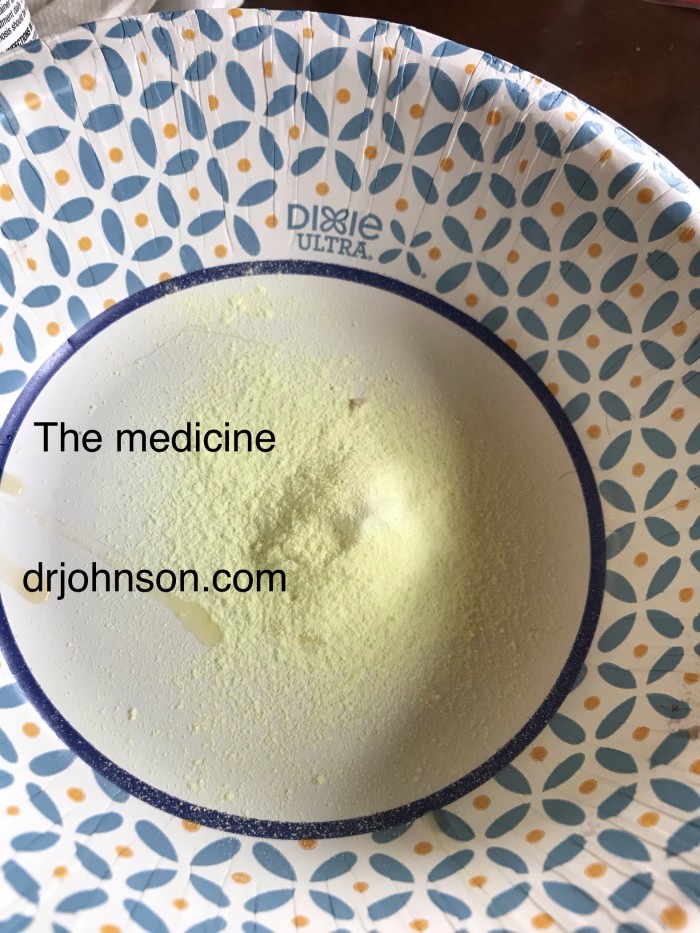 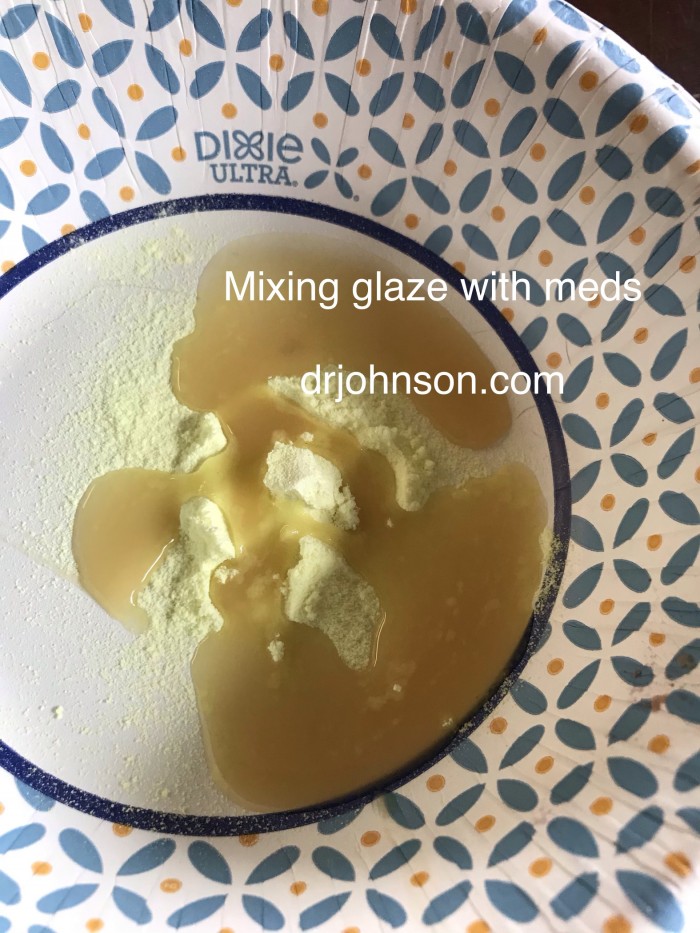 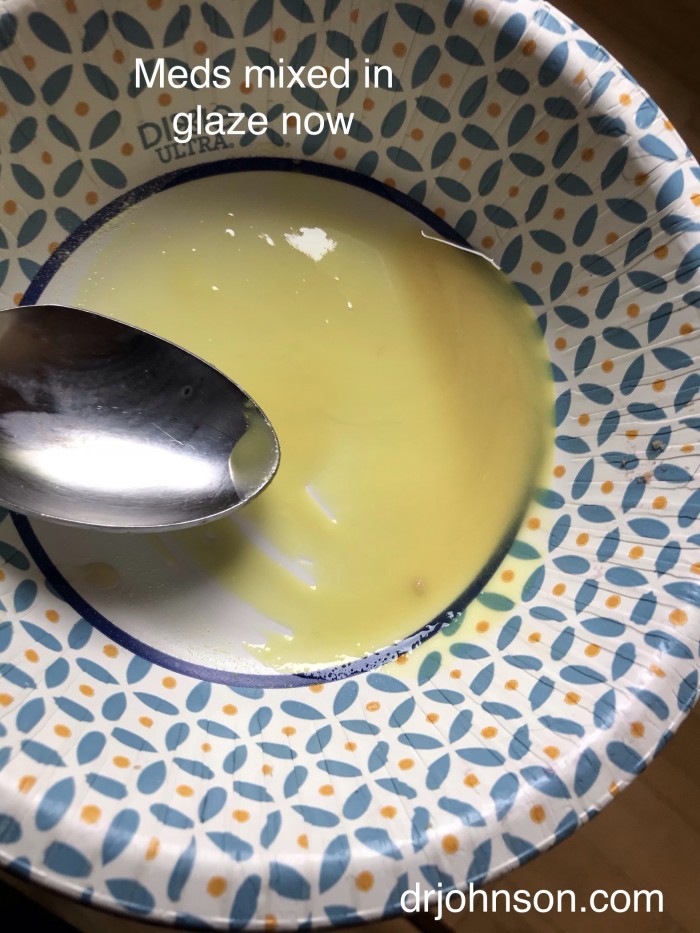 I then add the food to the bowl (or bucket) and stir it until all the food is shiny with the mixture. The ‘medicine-paint’ as it were.

THE KEY ELEMENT HERE is to spread the  food out so it doesn’t form into a great big BALL of glazed food.

I spread the sticky, medicated glazed feed out on paper-plates, aluminum foil, a bowl, and WAX PAPER to see which surface was best to dry food on. The easiest thing I used was the wax paper because the food STUCK the least and it was easy to roll up and pour the food where ever I needed it to be. 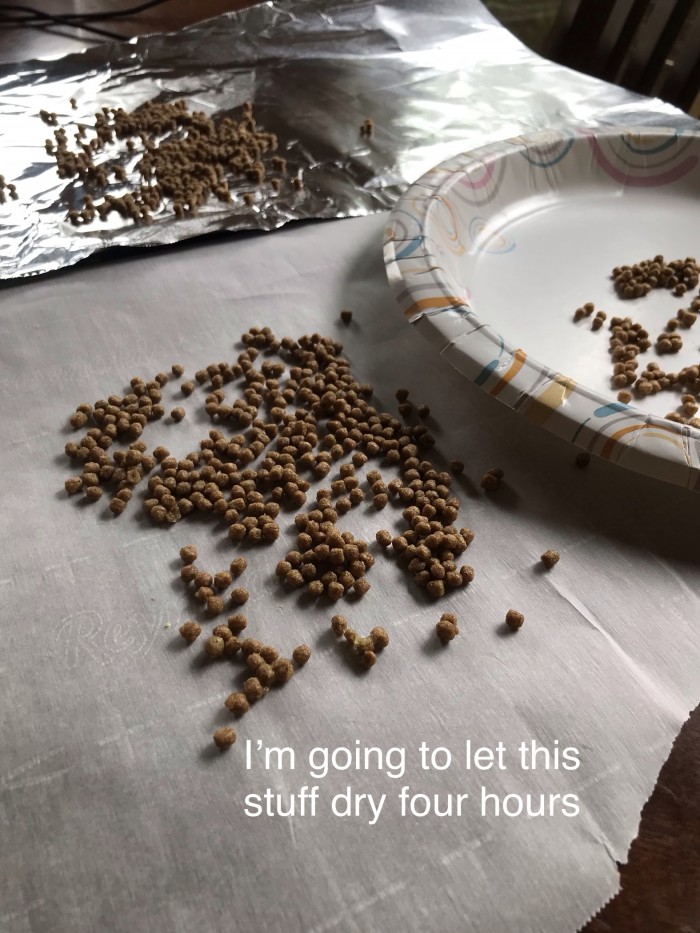 I let the food dry ONE PELLET LAYER THICK on wax paper for FOUR hours. And then put it in a bowl, ready to feed.