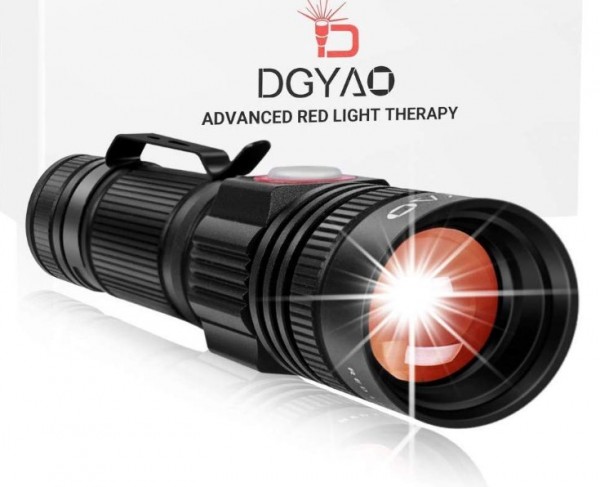 Want an audio explanation of how laser really works at the cellular level? (Click to listen)

The “veterinary” version of laser is called “K-Laser” and I have no idea what the “K” stands for but the unit is $14,000 but apparently pays itself off in two years. Vets charge about $25 per session and a session is a few minutes.

The thing is, IT WORKS.

But there’s other “things.”

Like, technology has made it possible to do roughly the same thing as a $14,000 laser with a $90 piece of gear at home. How is this even possible?

Remember when a 64 Gigabyte thumb drive was hundreds of dollars? Now they’re giveaways at $8.

Well in the olden days, the ability to drive a VERY intense red light at 660-680 nm deep into the tissues at any meaningful power, you needed the concentrating ability of LASER.

But now they have LED’s up to FIVE WATTS and they’ll blind you.

BACKGROUND:  The original “Chi Lite” was my first exposure to “red light” therapy 15 years ago, and it was because I had a piece of jewelry I wanted to wear and the piercing wasn’t healing. Not in 6 weeks. My veterinary colleague Dr Newman happened to own, and use a Chi Lite. He loaned it to me and (I know this sounds Chi-see (ha ha ha punny) but the lesion healed within the week with 3x daily light therapy at 1 minute per exposure.

In a nutshell, it activates the oxygen producing centers in our cells, (mitochondria) identically to the way sunlight at 660nm activates the chlorophyll in plant cells.  (Audio explanation)

So in recent years, VERY recent years, you can penetrate at least an INCH into tissues with meaningful amounts of 660-680 nm light with modern LEDs. Laser isn’t absolutely necessary anymore, especially for pets because MOST pet’s lesions can be reached in an inch or two. ESPECIALLY achey hips, knees, sore gums, ulcers, skin lesions, etc.

There are “issues” with LED therapy and the number of choices that you have on the market. There are pitfalls in quality, reliability, and especially trust. Lasers may not be lasers, they MAY be LED’s. LEDs are great, but they may be deceptively numerous, but very low wattage. Minimal penetration, but over a larger surface area = less effective.

Individual experience is (due to cost), necessarily limited with ‘every’ device. So I decided to try a unit that had a price point that could be accessed by most people. Figuring that if I had to test a $300 piece of equipment, WHY WOULD I DO THAT if no one wanted it for that kind of money?

Comes from a company (DGYAO) that makes some of the big fancy ones. So they “know” LED Red Light 660nm Therapy. And they’ve entered the market at every price point from low to high. And their “low price point” offering isn’t disappointing.

Reasons their $89 unit is less expensive is because they could engineer and fabricate it in a pre-fab “flashlight” body so that did not have to be customized. It’s aircraft aluminum and it’s solid. The electronics are aluminum and brass where they need to be. It has “O”-rings as if to make it waterproof but they say it’s not.

They reduced the power of the bulb from 5W to 3W which cut costs without ruining the effect. (But it limits penetration to a respectable 1 inch)

The battery is Lithium Ion. It can push the unit for more than 3 hours. They send THREE different ways to charge the battery (it’s also removable and replaceable) and I like the charging IN the flashlight method. But they sent a USB cradle, and a USB wall unit and cord, too. Crazy, right?

They warrant the unit for 1 year. One or two companies warrant their unit for a lifetime but that also drives up price.

This unit also has an adjustable surface area but that is of very limited value. You can pull the head of the light outward and it makes the light into more of a pinpoint, but not stronger per se than just putting the light directly onto the skin.

Erik, we have been doing the K-therapy since last Thursday morning. It seems to have helped her, and my aching thumb feels better. I am able to play guitar again.