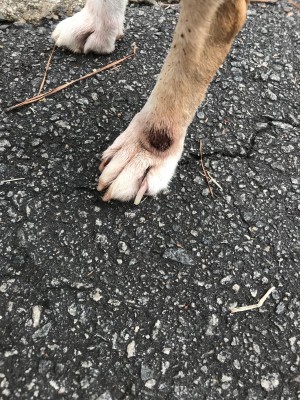 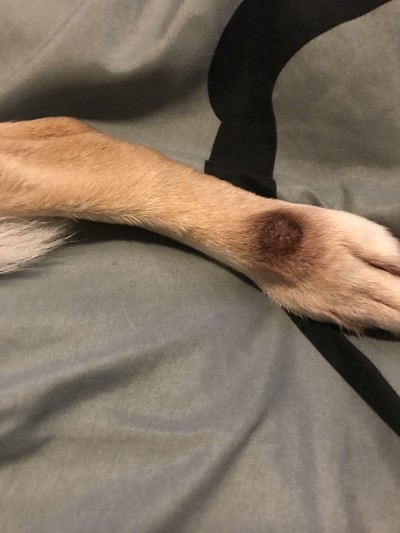 This is an acral lick granuloma except it’s not acral ha ha ha ha  this one’s on the hind foot, but it’s in a very typical location. An acral granuloma is a patch of scar tissue that a dog won’t allow to heal. So they lick it because it tingles, according to people who have them. Sometimes they lick them out of anxiety, out of habit, and our of boredom. However they’ve also found that antibiotics can help heal the skin, but the problem is that when you stop the antimicrobial, the lesions come back. So, many of the dogs often live in cone-collars.

There is a way to heal these faster dripping insulin (straight up) onto the lesions and wrapping the foot in Press-n-Seal and a wrap to keep the insulin against the skin, and keeping the insulin from drying out. Healing rates double. But you still have to keep the dog from licking the lesions. That’s the basis of all success.

I’ve removed these lesions in the past, and wasted money with the formation of a new one at the surgery site, so don’t bother.

I’ve injected steroids under these, and it helps. But they only heal halfway and then regress. Don’t bother.

I’ve frozen these lesions and that ruins the skin, sets the granulomatous tissue back, numbs the lesion but as soon as the lesion heals from the iatrogenic frostbite, the dog’s back to it. It never is actually better, it’s just ‘a lesion’ of a different type for a week.

Wraps are good. Cone collars are good. Antibiotics are good. Insulin topical under Press-n-Seal is good. You can even emulsify the insulin into NeoSporin (keep refrigerated after) to make the insulin “stay on” longer.

Anti-anxiety medications are making a break into management of the acral lick granulomas. Elavil, Amitryptilline, Prozac, even CBD/THC are often effective. Even if anxiety and habit are only HALF the problem, it’s worth a try. Not very expensive.

And according to the article I’ve attached to this post, they’re having some luck with red lasers, which cause activation of healing components in the skin. A mitochondria is ‘activated’ by ‘sunlight’ and even moreso by artificial wavelengths, for example 600-700nm. Near infrared. So they’re using light-therapy and getting some healing.

I think the best approach would be something like Fluoxetine or Clomicalm, PLUS an antibiotic (to be on the safe side) and a cone collar.  The topical of choice would be Cetafil  cleanser wipes and then light-therapy as mentioned above.