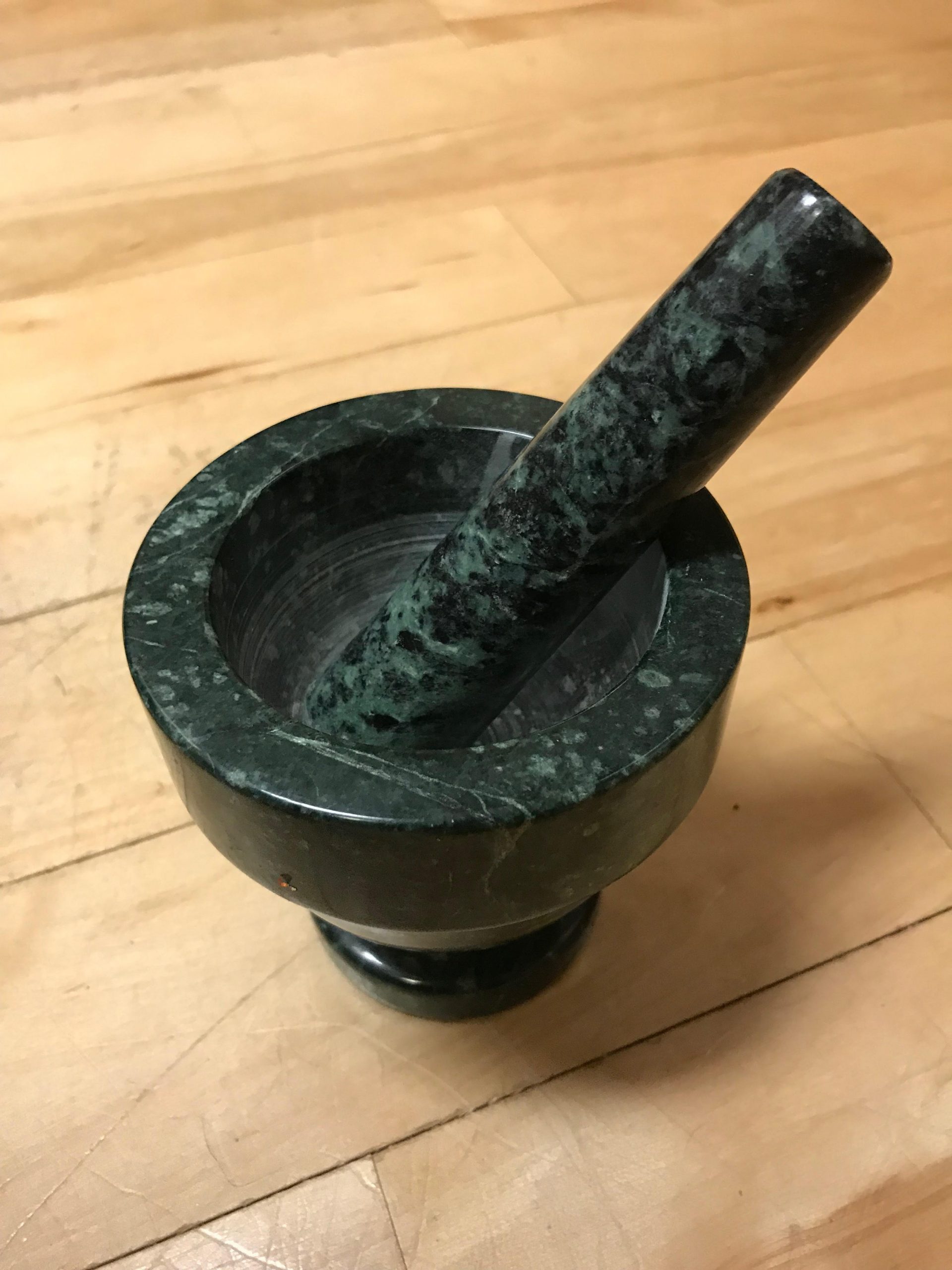 A lot of cats and dogs won’t “take” their medications. Even if they (at first) would accept a piece of cheese or bread with a pill in it, sooner or later they can “figure it out” and reject ANYTHING with the pill in it. So, then what?

Or what if the dog just isn’t eating? Do you HAVE to poke the pill down the dog or cat”s throat? Not necessarily.

Now, for SOME pets it’s fine to poke a pill. I can do whatever I want with Ajax. It would be more difficult with Izzie and it would be impossible with Luna because Luna is so tiny.

You should check with me before you grind up a pill in case something’s time-released or can’t be crushed without losing potency or becoming dangerous, but MOST medications can be ground up and mixed with:

How do you grind up a pill?

Well at my house I’ve used a mortar and pestle. Pictured.

But there are much easier was to grind a pill

They make a little plastic grinder for under ten bucks (pic below) that does a great job, is easy for normal / weak hands and is easy to load and unload.

If I was to replace the mortar with another mortar, like the one at left I would buy a mortar and pestle made of stainless steel. It just removes the incidence of powdered stone getting into my grind. Which is HIGHLY unlikely and inconsequential but frankly, stainless steel looks (and is) more medical.

Back to the idea.

When we give Izzy her pills, we simply crush her pills all together in the mortar and mix the pills with a little peanut butter and enough honey to make it “thin-ish” and we smear it on a plate. Down it goes. She seems not to taste anything.

Most people don’t try the “smear-on-a-plate” thing. They go straight to “make the pills into a liquid” thing.

That’d be about the same as crushing the pills – and putting them in Karo Syrup or something equally thin and syringe-able. (I don’t know why I started with Karo so long ago, for all I know it’s all I had in the cupboard, but it’s worked so well I’ve never even had to TRY honey or other syrups.)

Recently a client said that her dog has NEVER particularly cared for sweets so she immediately tried gravy and that was a hit. I imagine that some dogs would lap up gravy without any assistance but if you pick a decent, thin gravy you could syringe it if they didn’t just lap it up.

Kelly crushes Izzy’s pills sometimes, and melts a mild cheddar cheese, then mixes the powder in the melted cheese and lets that start to harden up, but while it’s still warm and soft, she gives the medicine. It works.

This article in printable format:  Pilling_A_Difficult_Dog_Or_Cat