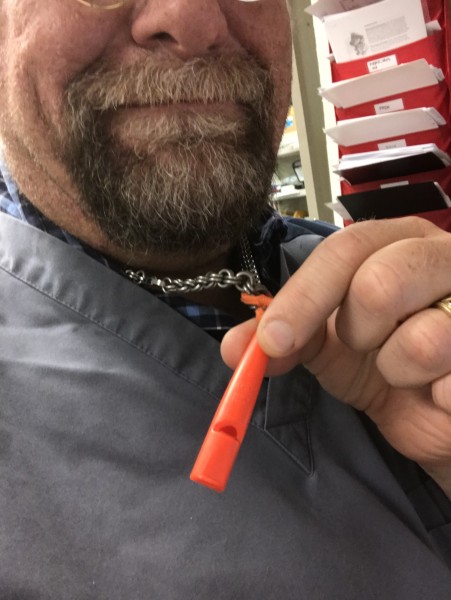 Two reasons I think everyone should have a training whistle

First let me talk about training whistles, there are three kinds, 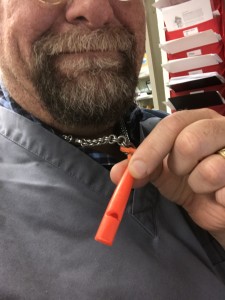 The first kind has moving parts that allow you to make the noise higher or lower, it’s kind of complicated and bulky and unnecessary. They are made of metal and the two I bought tended to fall apart and go out of adjustment.

The second kind I bought had no moving parts and was made of metal, it was awesome, it was shaped like a bullet and I really liked it but I wear my training whistle around my neck, and the metal started to mess with my skin.

The third kind has no moving parts and is made out of some kind of special plastic and it has a nice high pitch. Made in England and I’ve been wearing mine for years.

I use my training whistle as a means to call my dog but here are the reasons that anyone with a dog should probably have it.

If you have an old dog that is hard of hearing or going deaf or seems to be, you can train them to come to the sound of the whistle because they can hear it even as they go deaf. Until they are completely deaf they should be able to hear a peep from the training whistle all you have to do is train them with a food treat the same as you would a puppy.

To whit:
A training whistle is audible from a great distance and even though it is a very loud noise, it’s not that offensive like standing out in your backyard calling the dogs name over and over. So what you do while the dog is very young or perhaps most preferably as a puppy: every time you blow the training with so you give them a delicious food treat. Much better than the normal treat.

Whenever I blow the whistle, I would give Ajax a little nibble of whatever I was eating. I kept treats by the door that were exceptionally soft and meaty, and when I would blow the whistle he would get a treat like that. It’s very different from name training where he supposed to come when you call his name, quite often that is a hit or miss. And that’s OK. The training whistle is your “last resort“ “drop what you’re doing and get over here“ stimulus.

When I first started working with Ajax on the training whistle, I would keep it 5 to 10 times a day indoors and outdoors in the kitchen and anytime I was eating something. After a week or two, there is nothing he wouldn’t do to get to me when I peeped the whistle.

Because every single time I blew his whistle he got something truly delicious, a Ajax will stop midstep chasing a bird and come running. You’re not gonna get that from scratch behind the ears.

To recap, a one piece noncorrosive training whistle which can be on your keychain or around your neck, can provide you a way of summoning a nearly deaf dog to you, or can be conditioned to be an indelible signal to turn around and come back to you.