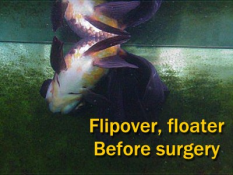 WAY MORE THAN YOU EVER WANTED TO KNOW ABOUT SWIMBLADDER DISEASE

“Why does my goldfish tend to float at the surface of the water and have a hard time going to the bottom of the tank?”

Because it’s got swimbladder disease.

Swimbladder disease is a multifactorial illness which primarily affects ornamental goldfish which have globoid body shapes, like orandas, ryukins, and fantails. It most often presents as a fish which floats at the surface, or a fish which stays on the bottom and doesn’t seem to be able to easily rise. A fish which has normal buoyancy but is listing to one side or the other often does not have swimbladder disease, but may have other diseases.

In order to understand swim bladder disease, a cursory discussion of fish anatomy and physiology is necessary. The swim bladder is a small epithelium-lined sac in the anterior abdomen which is responsible for maintaining buoyancy. It has a close association with blood vessels such that gases can diffuse across into and out of the sac according to the needs of the fish. The sac inflates if the fish needs to be more buoyant, and it deflates if the fish needs to be less buoyant. Goldfish and some other fish have a special addition to this system called the pneumocystic duct, which is a connection between the swim bladder and the esophagus, allowing additional adjustment of buoyancy by letting air out through the digestive tract.

People have debated for years over the cause of swim bladder disease. It is pretty well established now that a number of things can cause swimbladder disease. Some of the things which have been suggested are:

1. A virus. The virus attacks the epithelium of the sac and inflammation occurs which makes the epithelium too thick for gases to diffuse across. Thus the fish is stuck at a certain buoyancy because gases have nowhere to go. This may be more of a factor in non-goldfish species.
2. A Bacterium. There is little evidence to support this, but it’s widely known that bacterial infections can cause the same kind of thickening of the swim bladder epithelium as viruses.
3. Anatomy. Globoid-shaped fish like ornamental goldfish are predisposed to problems with the swim bladder because their guts are all squashed up in their abdomen. This arrangement predisposes to food impactions, which in turn clog up (or kink) the pneumocystic duct.
4. Diet. Feeding dry foods which tend to take on water like a sponge and expand in the fish may predispose to food impactions.
See #3 above.

SO WHAT CAN I DO TO PREVENT THIS FROM HAPPENING?

1. As always, the golden rule of fish disease is WATER QUALITY. If swim bladder disease does have an infectious cause, your fish will be better able to resist this infection (and others) if your water quality is good. Periodic water changes and water testing are a must.
2.Pre-soak your flake or pelleted food. This will allow expansion to occur prior to the fish eating it, and will lessen the chance of impaction.
3.Even better, switch to a gel-based food or other food source, i.e. frozen or live food.

LET’S SAY I DIDN’T READ THIS IN TIME. WHAT CAN I DO TO TREAT IT?

(Note: Some of this stuff is pretty far out, but effective.)

1. Feed your fish a couple of peas. That’s right, peas. Just get some frozen peas, thaw them, and feed them to your fish. A professor of fish medicine at N.C. State College of Veterinary Medicine has done this in several cases with very good results. He thinks that the peas somehow encourage destruction of the impaction. No hard scientific data yet, but it’s worth a try.
2. Periodic aspiration of the swim bladder (sometimes) works very well. Basically, you stick a needle in the swim bladder and suck out some of the air. Not something to be entered into lightly, but (sometimes) does work well. This is not a cure, but a successful treatment.
3. Fast your fish for a couple of days. Withhold all food for three or four days, and sometimes this alone will break up the impaction and return things to normal. Most fish can go a week to ten days without food and be just fine.
4. Partial pneumocystectomy. This is another word for surgical removal of part of the swimbladder. I mention this less as a practical option but more just to let people know that there are vets out there doing X-rays, surgery, general anesthesia, even cancer chemotherapy on fish.

But the best thing to do is to prevent it from happening in the first place.

The above, courtesy of Vincent Ling and his excellent site: Oranda

I regularly exchange emails with Janet Breslin so I’ve been following the Eve saga pretty closely. Congratulations on another success! I thought I would send you some notes on what’s been working for me in terms of reducing swim bladder problems in goldfish to an almost non-existent event. I’ve listed these in order of significance in what I believe are factors determining my success.

1. Quality of fish. For over two years I have exclusively bought fish
from Rick Hess. I think his sources are the best. His recovery methods for when he receives the fish (a lot of your suggestions according to Rick) and his 30 day quarantine. Plus Rick’s shipping is top notch.

2. Water quality. In all of my tanks the nitrates are in the 5-10 ppm at
their highest (measured just before weekly water change). PH is from 7.2 to 7.6; ammonia and nitrite are always zero. Each tank receives a weekly 50-70% water change. To the consternation of most of my fellow goldfish keepkeepers I still use gravel and UG filters in most of my tanks. My thought on this is that it is the most stable and cheapest bio-filter around. My success with UG filters is due to weekly vacuuming of the gravel during water changes.

From Doc Johnson: I like Undergravel filters unless they’re neglected. There is no better way to avoid anaerobic spots in the gravel and it makes great filtration. ELJ Running new water all the time is also superb for water quality and keeps sponge and UG filters in top notch shape by reducing DOC’s and background pollution. (2019)

3. Diet. I feed my fish once a day. Usually fast them one day a week.
Also, I try not to feed pelleted food two days in a row. The pelleted food I feed is Sho Gold; no presoaking. I alternate Sho Gold with frozen peas and cooked shrimp. When I run out of things to do I’ll start researching different home made recipes.

So in a nutshell I think the best treatment for swim bladder is preventing it. I still have the occasional problem fish. Right now I have a Japanese Ranchu that when he’s with other fish (Ranchus) he is such a hog he always floats for 8 hours after feeding from over eating. Kept by himself where I can control the amount of food he does fine.

Just some thoughts. They pretty much coincide with what you’ve published on the subject…

Note From Doc Johnson
“Some of the above information is not exactly correct. While it’s true that floating foods will worsen a flipover or floater, the floating pellets do not actually cause it.” Doc Johnson (2019)

“Do not under-estimate Krill or Freeze Dried Krill as a great food source or treat for your Koi and Goldfish.” Doc Johnson