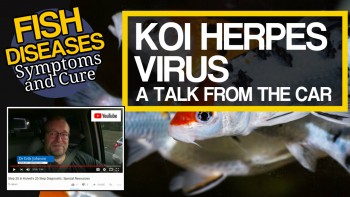 Look at the above.

The fish were saved at 83-84. So we know that saves the fish. You can take THAT to the bank.

That says to me, the virus is GONE and has to be replaced to re-infect the fish. Otherwise they’d just lower the temperature to the virus’ happy-range (in the proven absence of antibodies) and they’d just break again.

What Should We Do with Any KHV Surviving Koi?

It is unknown if the KHV (Now called CNGV) is latent in the fish or not, although recent tests have shown that of 100 infected and recovered fish, FOUR percent of the survivors had virus particles in their tissues.

This was not done on heated fish that survived KHV and was a study intended to see how many natural survivors carried the virus. Four percent or less.. This means that there is the chance that your fish “carry” the virus and can infect new fish which you might buy.

2019: So far, people who have actually heated and saved Koi are not reporting any further infections among those fish or infection of new comers unless the newcomers brought it.

Even the fish which are heated – may still carry the virus. We won’t know this until or unless there is: A good test for latent virus, and / or there’s feedback from people with KHV survivors who survive a complete Winter-Summer cycle without dying or infecting other fish in a second round or ‘relapse’

So, KHV survivor Koi should be considered potentially infective and should be kept with OTHER KHV infected or surviving fish in “closed-contaminated” collections. Since KHV/CNGV has become so rampant, there are A LOT of people in the same “boat” with KHV collections who would want your fish.

How Should We Disinfect the Pond When this is All Over?

The virus is extremely fragile outside the fishes’ bodies. In the water, and in some studies, infectious particles in the water disappear within a day of removal of a fish host. In other studies,
seven days is considered safe exhaustion of the virus in the pond. So, some would say that there is no need for disinfection, simply leaving the pond empty for a few days exhausts the virus.
I do not share this opinion and would rather opt on the side of precaution.
I would recommend that the pond be drained. Refilled with plain chlorinated [or chloraminated] tap water – which is NOT dechlorinated. Then, every other day, double dose potassium permanganate would be applied to the system to denature any latent virus or bacteria.

When Should We Add New Fish?

I would confidently add new fish after the above has been executed. There’s been chlorine, time, and several rounds of potassium permanganate in the pond. The key is the “fishless” condition of the system. Since goldfish can carry KHV, these cannot be tolerated during the cleanup process. Any new fish you add after the disaster can be an infectious KHV carrier from the dealer – so it would be commendable to employ a quarantine before re-contaminating the main pond.

How Should We Disinfect Nets, Tubs, etc?

Disinfection of tubs, nets and such is pretty straightforward. The central ‘concept’ here is the use of a spray disinfectant. You can make a suitable ‘spray-on’ disinfectant with Clorox Bleach, mixing one ounce of Clorox in 29 ounces of water. The final concentration is 1:30 Clorox. This is virucidal, bactericidal and fungicidal on clean surfaces but should NEVER be used in contact with, or on fish.

This spray, will have a fairly strong chlorine smell to it but it will probably (to you) smell weaker than you’d think would still work.
Tanks can be drained, scrubbed with the spray you made, above, and refilled with chlorinated water. Use no dechlorinator. If you’re still not sure, you can use potassium permanganate in the tank when refilled in case you’re worried.

Nets can be sprayed off with the 1:30 spray Clorox, given a few minutes for permeation, and then rinsed in clear water. If you do not rinse the nets or other materials with clear water, the Clorox will fade and weaken nets.

How Long Can The KHV Virus Survive Off the Fish on Nets?

Since the virus is very fragile there would be those who would simply recommend ‘time’ to disinfect the net, or at least exposure to sunlight and complete drying for twenty four hours. Still, I cannot stand to see you do this with a new virus which may still come with surprises, so I would recommend that you would use the dilute 1:30 Clorox solution and a clear water rinse to disinfect ANYTHING that came in contact with the fish.

How Can We Limit The Spread Of KHV?

The only way to limit the spread of KHV is detection BEFORE spread occurs, which would require more sensitive testing than we have currently. The PCR test checks for the DNA of the virus but the virus is not always abundant in every sample you might collect. Homogenized (liquefied) organ tissues are best for detecting the virus, which means those tested fish must die. Swabs and blood testing have yielded good results but not as consistently as homogenized tissues. If I needed to test a LIVE fish without sacrificing it, I would bleed it and send a cc of serum to UGA at koilab.

Quarantine functions as the single best means to limit the spread of KHV.

Quarantine coupled with heat at 83 to 86 degrees Fahrenheit – with an eventual vaccine being developed by the Israelis, and or perhaps even testing and exposure of SPF fish for the final assurance check are all available and should be investigated by the Koi community, especially at the retail level. Unfortunately, only a handful of dealers are even aware that KHV / CNGV exists, and even fewer care to try to prevent selling an infected fish.

Over the last several years, we have shown that hobbyists and retailers and even breeders are reticent to spend very much on the development of research or vaccination of Koi for KHV. I have abandoned all hope or interest in KHV and its control based on people’s preference to buy new fish and hope for the best.
Dr Erik Johnson