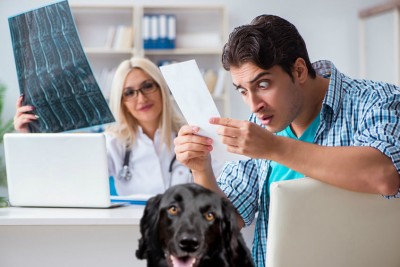 The reasoning is logical, the oncology area of veterinary medicine is extremely lucrative, because the clients who seek chemotherapy and advanced cancer treatments are instantly prequalified as highly spendy, and dedicated owners. Companion animal oncology is neither labor nor time intensive so, besides the high cost of some of the chemotherapeutics, the profit margins are very, very good. VCA expects to do very well for their shareholders on this endeavor.

Be careful. I’m not saying that’s predatory, and if I had a dog with a complex cancer with the potential for a cure (rare) I’d thank my lucky stars they were there for me. But there’s also a BIG downside….

How do you keep a freestanding oncology clinic alive if SEVENTY FIVE PERCENT of ‘cancers’ in dogs are ‘no big deal’?

Make a big deal out of everything you see.

The impact on the consumer is that every sebaceous wart and keratin cyst, every lipoma and the other 75% of neoplasia in dogs which are statistically benign, will be treated in the ‘best-practices’ of the “state of the art“ meaning, the animal will undergo laboratory testing, metastasis checks in the form of radiographs, fine needle aspirate of any lump brought to the oncology hospital, and the recommendation for excision in a surgery that probably will cost about $100 per minute.

Absolutely none of this is an exaggeration. All of the above he is considered to be “best practices“ as far as nodules, masses, neoplasia, Hypercalcemia, gammaglobulinemia, and any lymph node enlargement of any kind and of any sort in dogs and cats.

What is my take away on this note, and the construction of 35 cancer specific hospitals nationwide?

A little background on why this is even allowed to happen:

In 1960 the Supreme Court made a landmark decision allowing the ownership of medical practices by non-medical parties. In other words, open the door to corporate ownership of businesses in the “learned arts“ [literally the terminology]
Prior to 1960 doctors and medical practices including veterinarians were prohibited from ownership by lay-educated non medical owned corporations and there were stringent laws in place preventing doctors from fixing prices, gouging, and even engaging in any marketing practice that capitalized on the vulnerability of the patient in need.
In 1960, all of that was struck down, entitling corporations owned by and allowing shareholders to open for-profit businesses in dentistry, ophthalmology, medicine, surgery, and veterinary medicine.
This has permanently changed the climate of all of these practices, veterinarians working in corporate environment such as these are now marionettes for a non-veterinary community of shareholders who demand a profit and substantial returns on investment. Veterinarians may be commissioned for upsells, and admonished for failing to increase ‘average invoice’.

I should know, this information isn’t just coming from no where. I used to work for a very prominent veterinary corporation and my diagnostics and procedures, were specified by a woman who didn’t even finish high school.

When she came in and told me what suture material I was ‘allowed‘ to use for my spays, I walked out the door 3 weeks later*.
*I also got a token 0.15 cent per hour ‘raise’ ($300 a year) because I did not earn any commissions on upsells for the previous quarter.