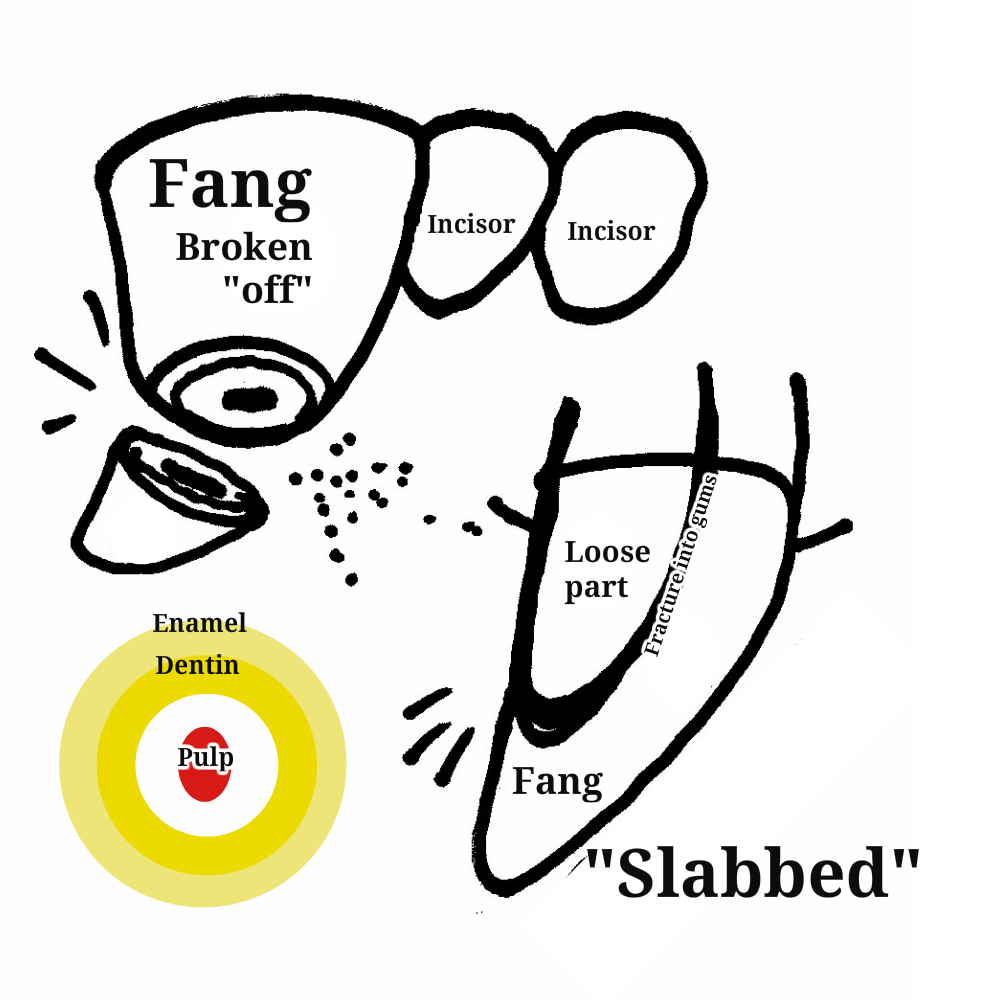 My dog broke a tooth “My dog broke a tooth, what should I do? I have heard that a root canal is extremely expensive!“

That’s actually true. There are veterinary specialists who perform root canals to save teeth that have been damaged that way. If a little bit of the tip of the tooth is broken off, they can open the pulp cavity, clean out the blood and nerve and pulp inside the tooth, which must be done extremely thoroughly, they can replace the content of the tooth with an inert substance and then they can close the tooth with a crown.

You seriously don’t want a regular vet performing this procedure. It would be the same as doing nothing with the tooth except a big bill. I saw enough of it in veterinary school and watching the specialist work, for me to know that you could create more problems than it is worth to try it with a regular vet who “probably can do that.“ You should be aware that the veterinarian can do the pulpotomy and seal the tooth and it will look successful. Besides turning grey or brown and translucent which it probably would have done anyway. Done correctly, the tooth is indistinguishable from the tooth on the other side.

By far the best way to approach a broken tooth (if you’re not going to see a specialist) is to leave it alone with one or two notable exceptions:

If it tooth is broken into more than one part and fractures in the tooth go up into the gumline, (Slab fracture) I think you owe it to the pet to get that removed.

The smaller part of a broken tooth like that, the part that goes up into the gumline is called a slab. Most veterinarians recommend removing the slab and leaving the main part of the tooth, if it has the majority of its root system. At that point if a person wanted to have a root canal done and close the tooth, that is certainly their prerogative.

Should I Show A Broken Tooth to My Vet?

Yes. I’m going to check on the:

If my dog had a broken tooth, unless it was broken into the gumline, I would probably leave it alone or extract it.

Doesn’t it hurt if you leave the tooth in when it’s broken?

For whatever reason, when a person breaks a tooth, they say it hurts for a while

I have no idea how they know this, except at some point I was taught it, but when an animal breaks a tooth, the pulp cavity with the nerve dies very quickly and without that nerve, the tooth becomes numb. My suspicion is that mother nature realized she could not have carnivores walking around holding their jaw for a broken tooth instead of eating, they gave them a very expedient nervous system with regards to broken teeth. In other words, “they get over it real fast.“

Any veterinarian worth their salt will tell you that there is a risk of infection gaining access to the tooth or even the face through a broken tooth and exposed pulp cavity, which is true. However, the odds of that are extremely low. First, the dog has its own immune system and can fight infections. Second, the root seldom stays open, quickly accumulating material and/or tartar as the dentin surfaces exposed in the fracture are highly receptive to tartar formation.

For whatever reason, in practice, I seldom see broken teeth meaning anything to the dog.

Interestingly, five times more often I see unbroken maxillary premolar getting an abscess at the base in dogs over 10 years old, that kind of tooth root abscess for whatever reason is quite common and manifests early and tenderly. Leading me to believe that if there were a problem with a broken tooth, you would know it just as fast and just the same way.
So the question comes up, “when would you have a root canal performed?“
Well, that would go to your pocketbook and what you needed the dog to do. Does it need the teeth to do a ‘job’?

I saw a Doberman Pinscher in the newspaper that had both of its fangs root canal, the jewelry store owner said that he needed his teeth to perform his job protecting the store. Of course I knew, that it was a publicity stunt for the jewelry store.
To be honest, if a dog does use its teeth for any aspect of its existence, and you can afford it, I think a root canal would be very nice.

So, who does root canals? There are veterinary specialists that do that and in the Roswell Georgia area there is Dr. Mees.

Angela Mees, DVM
Dr. Mees is a native Atlantan. She graduated from the University of Georgia College of Veterinary Medicine in 1998. After six years in general practice, she devoted her career to veterinary dentistry.

“I would highly recommend this place if you’re in need of an emergency vet.”
“She and her staff are personable and knowledgeable.”
“Dr. Mees and her staff are amazing! They are all very helpful and Jessica is very thorough about explaining everything. Love these ladies and all they did for my kitty Merlin!”

“Why won’t you do root canals, Erik?“
Because I figured it out while I was in vet school [and fresh out of school] that if you do a root canal and you are not perfect at it, you will actually triple the odds of infection inside the tooth by messing with it, over just leaving it open. I don’t want to be “that guy“ he charges somebody $1500 for a root canal only to have to go in later and cope with an infection in the jaw line, and then have to explain that I’m not a specialist and didn’t do it perfectly the way they do. My point: if you’re going to do it, have it done right and don’t pay a hack like me (and most other general practitioners) who shouldn’t be doing route canals.