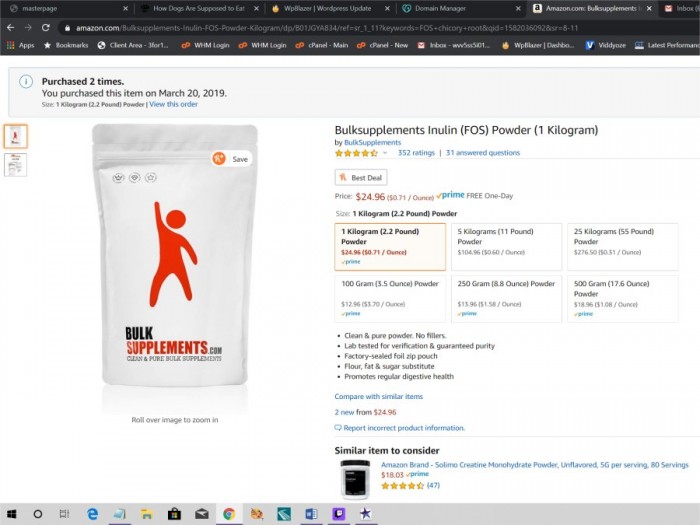 What is FOS and Why Should I Care?

Inulin is the ‘active ingredient” in all the cholesterol-lowering-good-gut-germ-growing-probiotics in the plant kingdom. Black beans, canned pumpkin, sweet potato, etc.

It turns out, to maintain a decent quality poop for most indoor dogs, “FOS” is great.

Gluten free and powerfully bio active in the gut, FOS slows an irritable bowel, and activates a stale one.

Question: What is FOS Made of?

Answer: When FOS appeared on the market it was made with Chicory Root. It’s still made with Chicory Root but quite often, it also comes from “Jerusalem Artichoke” and tbh you couldn’t tell the difference because it’s both a white powder that looks like coffee creamer and has a very faint, slightly sweet taste.

Question: How do you use FOS in canine feeds?

Answer:  I use 1 tsp per 15 pounds of dog sprinkled in each feeding. IF the dog gets really gassy, or somehow (improbable) ends up with a loose(ish) stool, you’re giving too much. If the dog isn’t gassy at all and the stools are “better than ever” then you’re doing it right.