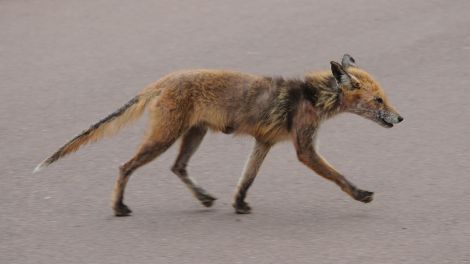 “That is a fox with sarcoptic mange. You can tell it’s a fox by the white tip on its tail, and the mange is what causes the hair loss and scabbing. We had a very similar looking one that hung out in/around our backyard for two weeks in late June/early July, and it looked a lot like this one does in the photo (it’s tail hair was completely gone, face was scabby, but the sides had a bit more hair. It was too busy itching to hunt for itself, though). If it is the same one we had, it looks a bit stouter than the last time I saw it, and if it’s hunting again instead of just itching constantly that’s a great sign ?? ”

Tom: Can the Department of Natural Resources not capture and render aid to this sick creature that does man no harm?

Me: Tom T. it would be worth a call, but (and others will share this experience) the DNR turfs these “hot potatoes” off to Cobb County’s Animal Control, for logistical and expense reasons. Then you call Cobb County’s Animal Control and they, too, for logistical and expense reasons, send you back to the DNR. But it may still be worth a phone call, and they might know a rehabilitator. I’ll be honest though, if this Fox gets on too many radars, the responsible authorities with oversight on the case and a desire not to appear ‘asleep at the wheel’ are likely to trap and euthanize it. Which again, may be best for the critter. Maybe not.

Me: Again, this is a great group of people for caring so much. Totally concur, fox (probably grey, not red, but damn can you really tell?) with mange (most likely) or extensive ringworm (much less likely). And yes, I think obtaining Ivermectin is a decent thing to do… I don’t know about the legality of it, but come on.

Me: What’s linked below is a 1% solution which would (hypothetically) be used at 0.40ml per day x 21 days. There are many other potential treatments but in my humble opinion, this dose is safe, for the fox and for other animals that might pick up the morsel*, and is cost effective and easy.

Me: Giving the morsel (or even meal) on the daily x 21 days will (hypothetically) build condition and may even save kits if there are any.) Again though, I don’t know how DNR looks at you guys feeding (let alone scabicides) in wild carnivores. Imma leave that up to you to figure out, (or ignore).

I cannot lawfully diagnose, lay hands on, nor treat wild carnivores. But Ivermectin is available on Amazon as below, and doses on stuff are common Interweb fodder.

As a side note: No matter how “tame” or grateful that thing seems (or becomes), do not make the mistake of befriending, approaching or handling it. You’ll (ultimately) be sorry. So will the Fox.
https://amzn.to/315GzKh